If you search the Guinness Book of World Records for tattoos, you come up with entries for the most-tattooed living people and for the oldest one in the world. Ötzi, the “Iceman” mummy found in the Alps in 1991, is often considered to have the oldest examples of tattoos ever found. Yet some scholars argue that a Chinchorro mummy found in Chile in 1983 is the real record-holder.  In a new article just out in the Journal of Archaeological Science: Reports, an international team of archaeologists set out to settle the debate.

Historical records from the ancient Greeks mention tattoos as early as the 5th century BC, but the practice of tattooing is much, much older. Archaeologists know this because they can examine artistic representations of ancient people and ancient tattooing tools that have been preserved on archaeological sites to make inferences about tattooing in the past.  But the best line of evidence for the antiquity of tattooing is preserved human skin from mummies.

Archaeologist Aaron Deter-Wolf led a team of researchers in investigating records of “hundreds of naturally and deliberately mummified tattooed human bodies [that] have been recovered from throughout the world, including the American Arctic, Greenland, Siberia, Western China, the Philippines, Africa, Europe, Mexico, and the Andes,” he notes in the study, which surveyed mummies from a 5,500-year time span.

While the comprehensive, chronological list of tattooed mummies Deter-Wolf and his colleagues have published is a fantastic resource for other researchers, the real question is: Who deserves the title of “oldest tattooed mummy”? 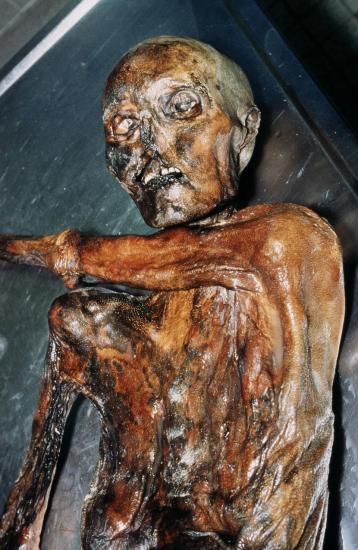 As a world-famous mummy whose body has been pored over for decades in search of clues to his life and his untimely death, Ötzi is the naturally assumed title-holder.  He died around 3250 BC and was quickly preserved in an Alpine glacier — until his body started melting out of it and he was found by hikers in 1991.  Ötzi boasts 61 tattoos over his body, mostly in groups of lines that might have had a therapeutic or medicinal purpose.

But a lesser-known mummy has long been a contender for the title as well.  Water line construction in 1983 near the city of Arica, Chile, brought to light nearly 100 mummies from the ancient Chinchorro culture, including one with a tattoo of dots above his upper lip.  Dating back to as early as 7000 BC, the Chinchorro mummies do hold the record as the oldest human mummies identified to date. But the culture continued through about 1100 BC.  The question, then is: exactly how old is the tattooed Chinchorro mummy found at the site of El Morro? One source that Deter-Wolf and colleagues found suggests the El Morro mummy was from “probably around 6000 BP ” — Before Present, or about 4000 BC, which would make him centuries older than Ötzi. 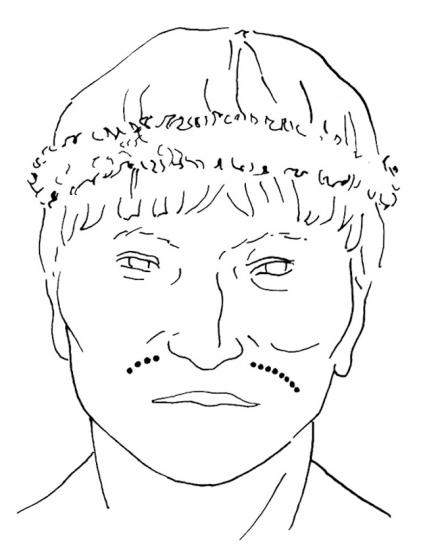 Deter-Wolf and colleagues tracked down a carbon-14 date from a sample of lung tissue from the El Morro mummy as well as the published carbon-14 date for Ötzi.  While the El Morro man died between 2563-1972 BC, Ötzi died between 3370-3100 BC. “The radiocarbon dates clearly identify Ötzi as the oldest tattooed human remains discovered to date,” Deter-Wolf and colleagues write, “antedating the Chinchorro mummy by at least 500 years.”

If there were in fact carbon-14 dates for both mummies, why did so many scholars think for so many years that the Chinchorro mummy was older? Deter-Wolf and colleagues hazard a guess that “scholarly misidentifications of the Chilean specimen appear to be the result of misreading the radiocarbon data.” Specifically, someone probably misread the date of 3830 ± 100 radiocarbon years BP and confused it with calendar years BC, then transposed that incorrect BC date back into BP, resulting in the estimated date of 6000 BP. Other scholars believed this date, quoting it in their subsequent work — including Deter-Wolf himself.

Although there are mummies from the Chinchorro culture that are definitely much older than Ötzi, none of them has documented evidence of tattoos. “Ötzi can now be demonstrated to be the oldest tattooed human so far discovered,” Deter-Wolf and colleagues write, but “it is highly unlikely that he represents the first tattooed person on earth.”

Frank Rühli, head of the Swiss Mummy Project at the Institute of Evolutionary Medicine at the University of Zurich, has done research on Ötzi for years and tells me that he is not very surprised to learn that these tattoos are the oldest in the world. Ötzi is “not only a very old but also a very well preserved mummy,” he notes, “which is one of the conditions necessary to actually trace tattoos. Interestingly, his tattoos are likely not only for decoration but also some sort of medical treatment.”

The fact that Ötzi has so many tattoos almost certainly means that others in his culture knew about tattooing and that he wasn’t the first person ever to have tattoos. Deter-Wolf tells me that archaeological objects are helpful in theoretically pushing back the date of early tattooing, as “there have been some compelling identifications of possible tattoo tools from the European Upper Palaeolithic” dating to 40,000 to 10,000 years ago. But using what we know about the evolution of the big brains of Homo sapiensand our penchant for creating culture, Deter-Wolf thinks that “complex symbolism and the practice of inscribing symbols on material culture may have laid the framework for permanent body marking by as early as 75,000 years ago.”

Whether archaeologists will find conclusive evidence of older tattooed individuals remains to be seen, but scholars think it is only a matter of time until they’re found. Rühli notes that “older tattoos may exist.  Often they cannot be clearly seen by the naked eye. For example, Predynastic Egyptian mummies or Chilean mummies might have older ones.” Deter-Wolf is also convinced that new imaging technologies will get better and become more widely available, leading to identification of more ancient tattoos. “I believe that sooner or later, there will be discoveries of tattooed mummies that predate Ötzi,” he says.

Until that happens, though, Ötzi retains his Guinness Book of World Records title for “World’s Oldest Tattoos.”