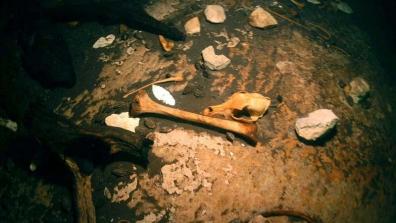 This photograph released by Mexico"s National Institute of Anthropology and History shows bones and artifacts found at a "cenote," or sinkhole cave, in Chichen Itza, a major Mayan archaeological site in the Yucatan Peninsula.

Mexican archaeologists exploring a sinkhole cave, or "cenote," in the Yucatan Peninsula pre-Columbian site of Chichen Itza discovered a funerary offering consisting of six human bones as well as vessels, jade beads, knives and other artifacts.

"According to experts, the offering was made as a rain-invoking ritual in the 9th and 10th centuries, when the Maya had suffered two periods of drought," the National Institute of Anthropology and History, or INAH, said in a statement.

The objects were found "carefully and selectively placed" at the bottom of a flooded cave that is linked by a 25-meter-long (82-foot-long) tunnel to a cenote near the Kukulkan pyramid, INAH said.

The institute added that the discovery was made during cave and cenote exploration work being carried out by INAH and the Autonomous University of the Yucatan.

Bone remains of at least six individuals - "probably sacrificed during a couple of intense periods of water shortages between 900-1,200 years ago" - as well as ceramic objects, jade and shell beads, flint knives and animal bones, were found at the site.

At the bottom of the cenote, at a depth of about 50 meters (165 feet), archaeologists also found bone remains of another 20 individuals and more than 100 animal bones, ceramic objects and sculptures, "most notably one of a standard bearer with features similar to (that of) a jaguar," INAH said.

Archaeologists also discovered another figure with "goggled eyes, similar to the faces that appear on the Tlaloc-type vessels" found at the Balankanche network of sacred caves, also in the Yucatan Peninsula.

Due to their characteristics, these discoveries recall the finds made at Chichen Itza's Sacred Cenote, the region's most important, the institute added.

Marine archaeologist Guillermo de Anda, who has worked in the area for the past four years, said these types of funerary offerings - which have been found in five cenotes in the Yucatan - are indicative of "a ceremonial practice (that has been) recently identified and is under study."

He added that it is clear that the people whose remains were discovered "were not thrown from the surface, but instead were placed along the walls of the cenote."