Chibaisong (Chine): New Discovery in the site of Han Dynasty

New Discovery in the Chibaisong City-site of Han Dynasty in Tonghua, Jilin

The Chibaisong City-site lies at a low second-step terrace 2.5 km southwest of Kuaidamao Township, Tonghua County in Jilin Province. It is about 60 km east of Yongling Nancheng City-site in Xinbin and 120 km west of Ji’anguo inner city site in Jilin province. 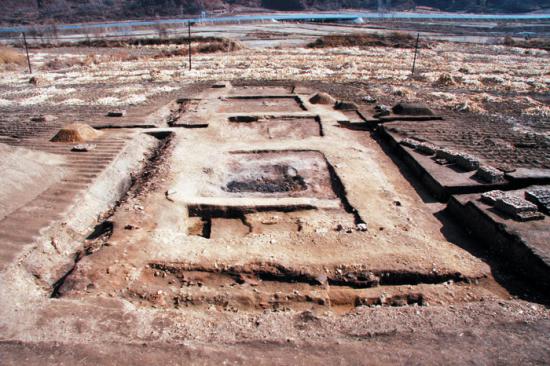 From April to November 2011, archaeologists from Jilin Provincial Institute of Archaeology have conducted a large-scale excavation to the site, on the basis of the former years of exploration.

Washed by rivers, the second-step terrace where the site situates forms cliffs on the east and south sides, making it look like a man’s fist extending to the valley. The ground features slop with the east part flat and the west steep and high. Explorations show that most large-sized buildings are located at the east region. 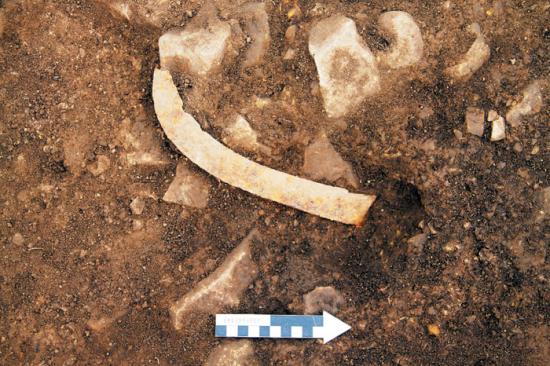 This year’s excavation disclosed a whole large yard at the east region, approaching an area of about 3,000 sqm. Analysis to the stratigraphy shows the surface of the ground had been massively leveled off before the buildings were established. The yard has a circling square wall in northwest-southeast direction, measuring 67.5 m long and 66.5 m wide. The wall and its foundation are densely filled with yellowish brown sandstone pieces, as same as in other part of the building complex. A drain is found on the south and north side of the yard respectively, extending down the slope and paralleling with the yard walls. On the north side of the yard there is a row of four building foundations. Near the two ends of the south wall many flat and semi-cylindrical tile pieces are found, which could be remains from the corner watchtowers.

The findings within the yard are the same as the previous yields. There are a large deal of Han-style tiles and iron objects, including implements like hoes, spades, sickles, weapons like lances, arrow heads and armor plates, horse and chariot gears like bits, hub sleeves and objects for daily life like weights, rings and nails. There are two kinds of ceramics. One is un-patterned reddish brown sand-mixed pottery, which has a flat bottom and column shaped ears. The other is the Han-style gray brown clay pottery, which bears patterns like rhombus, ropes and cords. Steamers, pots, basins and stemmed cups could be seen. These findings confirm an obvious influence from the Han Chinese culture.

In addition, a well is found in the city near the south wall. It has a round opening and square bottom, measuring 1.4 m in diameter and 2.3 m deep. A ceramic kiln with a gourd ladle-shaped plane has been found at the south foot of the mountain outside the city, which is serious damaged and hard to be made out. On the kiln grate are placed lids of incense burners, streamers and semi-cylindrical tiles. This find serves as a convincing proof for tracing the origin of ceramics in the city-site.

The archaeological work in the Chibaisong City-site gives us an idea of both the whole city’s planning and the architectural layout within the city, as well as the constructing ways of relating platforms, circling walls and the drain system. Either the architectural layout or the cultural relics are positive for dating and identifying the site. Some special remains could also provide clues for analyzing its functioning period and reasons for being abandoned.

The comprehensive study on both the archaeological materials and historical data show that the city-site was a Han Chinese city located near Northeast China used from Middle Western Han to Middle Eastern Han period. It both served as a military fortification and a county-level administrating unit. The discovery of the Chibaisong City-site provides new materials for researching the history and geography of Northeast China in Han Dynasty.      (Translator: Tong Tao)