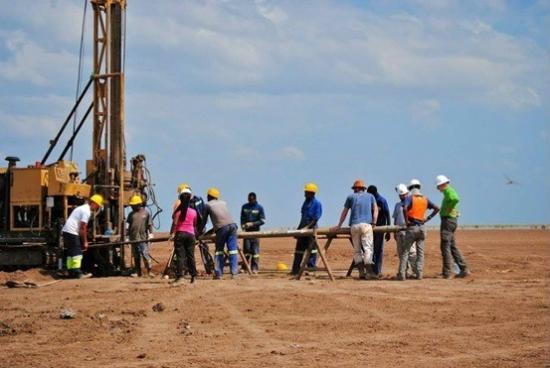 The Chew Bahir Drilling Project: Preparing to remove a core section in its core liner from the lowermost drill rod © Verena Foerster, University of Potsdam

How was human evolution and migration influenced by past changes in climate?

This question has led Aberystwyth University researchers to drill day and night to great depths in a dried up lake in east Africa.

The Chew Bahir Drilling Project, in a remote part of south Ethiopia, will provide a sedimentary record of changes in rainfall, temperature and vegetation, spanning the last 500,000 years of human evolution.

Chew Bahir, is one of a chain of lake basins in Africa’s Great Rift Valley, close to the sites of the earliest known fossils of our species, modern human Homo sapiens.

Speaking of the importance of the project, Professor Henry Lamb, of Aberystwyth University’s Department of Geography and Earth Sciences, said: “Ideas about how climatic change may have influenced the emergence and dispersal of modern humans have remained largely speculative. We are now going to be able to place the fossil and archaeological data against a detailed record of climatic variation. This will allow us to make more rigorous tests of these hypotheses.”

Coring was recently completed by an international team, reaching a final depth of 278m, in two adjacent drill holes.

Based on earlier pilot drilling, these cores should provide a sedimentary record of at least the last half million years. Work had to stop after the breakage and loss of 32 drilling rods, including the crucial drill bits.

Conditions on the mudflats of the ancient lake were arduous. The team of scientists and drillers, from Germany, Ethiopia, USA and the UK, had to contend with mosquitoes, trucks stuck in the mud, heat, rain and dust storms, together with all the logistical difficulties of operating in a remote and challenging environment.

The cores are now being logged at LacCore, the US National Lacustrine Core Facility at the University of Minnesota.

The team will reconvene in April to study the cores and distribute samples for specialist analysis and dating at labs in the UK and Germany.

The Team
Professor Henry Lamb from the Department of Geography and Earth Sciences at Aberystwyth leads a strong UK research team in the project, including scientists from Aberystwyth, Bangor, Liverpool, Newcastle, Oxford, and St Andrews Universities, and the British Geological Survey.