CHENGDU PLAIN (Chine) : Sifting through the past

Sifting through the past 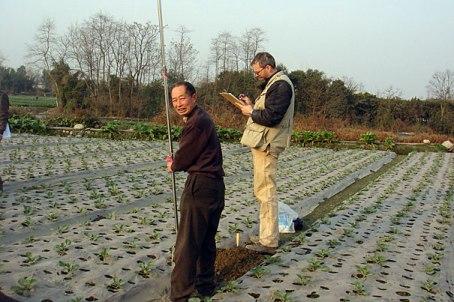 The Chengdu Plain lies flat and fertile in central China’s Sichuan Basin. Cut by tributaries of one of China’s most important rivers, the mighty Yangtze, the plain is something of a rarity in the hilly region, making it ideal for agriculture, now and in antiquity.

Harvard archaeologists are at work there, plumbing the roots of some of China’s early civilizations. The world’s most-populous country traces its past to the Qin dynasty, the first to unify large parts of the nation. The Qin arose just north of Chengdu, and its fertile fields made it their first target of expansion.

“The first region conquered outside of their homeland was the Sichuan Basin,” said Rowan Flad, an associate professor of anthropological archaeology who is leading an international team of researchers working in the region. “It was the breadbasket for the Qin army as they conquered.”

Flad has been at work on the plain since 2005 on one of its rivers, the Min, which served as an irrigation system during the Qin dynasty, roughly 210 years B.C.E.

Together, the collaborators are conducting a massive survey of the region, probing known sites and seeking unknown ones in an effort to better understand the region’s past. Survey techniques commonly used by archaeologists in more arid, high-visibility areas aren’t useful in the Chengdu Plain because surface materials are obscured by the ongoing agricultural uses of the land. Team members have to walk the fields exhaustively, cutting through rice paddies and drilling 2-meter-deep survey holes at regular intervals with hand augers.

Because the Chinese government frowns on expansive digs not prompted by road or construction projects, Flad said the diggers can only expand survey holes that turn up artifacts into 1-meter-square pits, when necessary.

“We’re trying to understand patterns of landscape use and to find sites in a systematic way that tells us something about those patterns,” Flad said. “What we’re looking for in this landscape is how settlement changed over time.”

So far, pottery sherds and building remains have been found that predate even the Qin dynasty, going as far back as the Baodun culture, about 2,500 years B.C.E., which created a series of walled settlements across the Chengdu Plain.

Researchers do much of their work in December and January, when rice cultivation is at a lull and they can get access to fields that aren’t flooded. They typically break into teams using a variety of tools and techniques, including the auger-wielding survey team, which walks predetermined transects and digs holes at regular intervals. A second group explores surface remains using traditional survey techniques. A third seeks to understand patterns of landscape changes such as altered river courses through geomorphology, while a fourth explores known archaeological or active construction sites. The final group processes the data, resulting in computerized maps that can help guide future explorations.

Flad said the international nature of the work is important, and members of the team bring different skills. The Chinese team members contribute not only archaeological expertise but also help to guide the permitting process. The foreign team, which typically includes Flad and several Harvard graduate and undergraduate students, brings its own archaeological and technical strengths, as well as funding.

Following up on earlier discoveries of larger Baodun-era settlements, Flad and colleagues have been able to document a series of smaller settlements across the plain that paint a picture of a far more densely settled area than previously understood.

“We can say the Chengdu Plain was more widely occupied and more complexly organized than previously known,” Flad said.