Bear DNA is clue to age of Chauvet cave art

Exploring a gorge in south-east France in 1994 for prehistoric artefacts, Jean-Marie Chauvet hit the jackpot. After squeezing through a narrow passage, he found himself in a hidden cavern, the walls of which were covered with paintings of animals.

But dating the beautiful images - which featured in Werner Herzog's recent documentary film Cave of Forgotten Dreams - has led to an ugly spatbetween archaeologists. Could the bones of cave bears settle the debate? 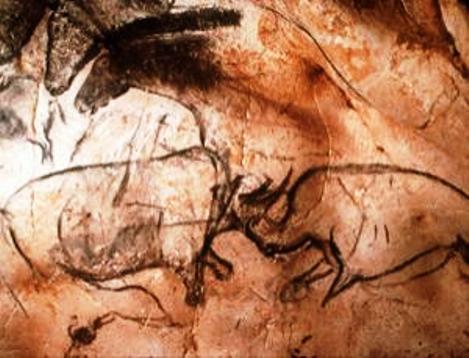 Too sophisticated for their time? (Image: Raphael Gaillarde/Gamma-Rapho/Getty)

Within a year of Chauvet's discovery, radiocarbon dating suggested the images were between 30,000 and 32,000 years old, making them almost twice the age of the famous Lascaux cave art in south-west France (see map). The result "polarised the archaeological world", says Andrew Lawson, a freelance archaeologist based in Salisbury, UK.

Lawson accepts the radiocarbon findings. "Nowhere else in western Europe do we know of sophisticated art this early," he says. But Paul Pettitt of the University of Sheffield, UK, is adamant that the paintings cannot be that old. The dating study doesn't stand up, he claims, insisting that the paintings' advanced style is enough to mark them as recent. To suggest otherwise, he says, would be like claiming to have found "a Renaissance painting in a Roman villa".

Despite a comprehensive radiocarbon study published in 2001 that seemed to confirm that the paintings were indeed 30,000 years old (Nature, DOI: 10.1038/35097160), Pettitt and his colleagues were unconvinced. Two years later they argued that the cave walls were still chemically active, so the radiocarbon dating could have been thrown out by changes over the millennia to the pigments used to create the paintings (Antiquity, vol 77, p 134).

To try to settle the controversy, Jean-Marc Elalouf of the Institute of Biology and Technology in Saclay, France, and his team have turned to the remains of cave bears. Along with mammoths and other huge mammals, cave bears (Ursus spelaeus) dominated the European landscape until the end of the last ice age.

The Chauvet cave contains several depictions of cave bears, and Elalouf argues that these must have been painted while the bears still thrived in the area. To pin down when the bears disappeared, his team collected 38 samples of cave bear remains in the Chauvet cave and analysed their mitochondrial DNA.

They found that almost all the samples were genetically similar, suggesting the cave bear population was small, isolated and therefore vulnerable. Radiocarbon dating showed the samples were all between 37,000 and 29,000 years old, hinting that by the end of that period they were extinct, at least locally. Samples from a nearby cave, Deux-Ouvertures, gave similar results (Journal of Archaeological Science, DOI: 10.1016/j.jas.2011.03.033).

Given the age of the cave bear remains, "it is clear that the paintings are very ancient", says Elalouf. Michael Knapp of the University of Otago in Dunedin, New Zealand, who also studies cave bears, says he has no doubts about the DNA analysis. 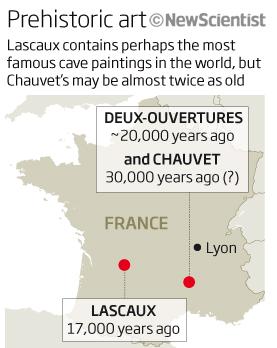 While we do not know exactly when cave bears became extinct, all reliably dated remains in Europe are at least 24,000 years old, says Martina Pacher of the Commission of Quaternary Research in Vienna, Austria. "So the results at Chauvet are not surprising, and I agree with their conclusions," she says.

"We now have an independent line of evidence that the bears [in Chauvet] date to before 29,000 years ago," Lawson says. "That bolsters the case for an early date."

Pettitt remains unconvinced, calling the new research "sloppy". He says that the team is trying to extrapolate the regional spread of the bears over time by relying on evidence from just two caves.