Chauvet (France): A volcanic eruption from 36,000 years ago – as captured by prehistoric man

The cave paintings at Chauvet are among the oldest, most beautiful and most elaborate in the world 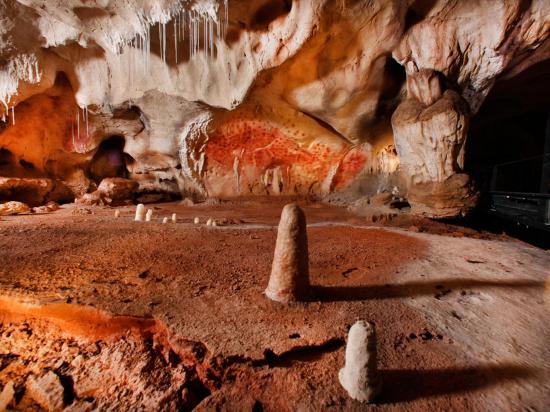 Scientists believe that they have identified the oldest known images of erupting volcanoes, daubed in red and white pigments over other cave paintings in south-eastern France around 36,000 years ago.

The puzzling and apparently abstract images were first found in 1994 among startlingly precise paintings of lions, mammoths and other animals at a complex of caverns at Chauvet in the Ardèche.

A team of French scientists, ranging from geologists to palaeontologists, now believe that the surging, fountain-like images are the only example in Europe of prehistoric paintings of landscapes or natural phenomena. The oldest images of volcanoes previously identified were drawn 8,000 years ago at Catalhoyuk in central Turkey.

The findings of the French team – published at the weekend on the scientific website PLoS One – could transform conceptions about prehistoric art. The cave paintings at Chauvet are already among the oldest, most beautiful and most elaborate in the world.

Like all other known cave art in Europe, they depict animals and – in the case of Chauvet – human hands. If the volcano thesis is accepted, historians may have to revise their theories about the meaning and purpose of cave paintings.

The claims are based on a new geological survey which dates volcanic eruptions in the nearby Bas-Vivarais area to between 30,000 and 40,000 years ago – coinciding with the period when Chauvet was occupied by humans. Carbon-dating of drawings both beneath and above the separate crimson and white “volcano” images suggests that they were drawn during this time.

The team, led by Jean-Michel Geneste, head of archaeological research at Chauvet, wrote: “It is very likely that humans living in the Ardèche river area witnessed one or several eruptions. We propose that the spray-shape signs found in the Chauvet-Pont d’Arc cave could be the oldest known depiction of a volcanic eruption.”

The nearest Vivarais volcano was 22 miles north-west of the Chauvet caves. Although volcanic eruptions take various forms, the Vivarais explosions are believed to have resembled a giant fireworks display – much as depicted in the paintings.

When the Chauvet complex was discovered in 1994, paleontologists were puzzled by the seemingly abstract images among detailed and anatomically accurate pictures of lions, mammoths , rhinoceros and deer.

“Their irruption in the caves seemed unusual and anachronistic because they were not figurative,” Mr Geneste said.

He and his team now believe that the Chauvet artists were doing what they usually did – creating art from the most extreme and dangerous manifestations of the natural world around them.