Preclassic and Classic Period remains are rediscovered by archaeologists near Chan Chich, a modern eco-lodge that also rests among the remains of a largely unexcavated Maya center in the jungles of Belize. 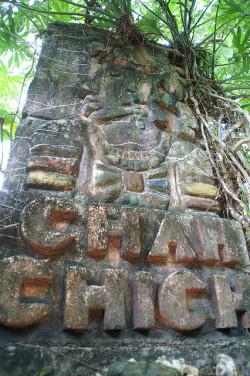 Tucked away within a dense jungle shroud near the Guatemalan border in Belize are the remains of a largely unexplored ancient Maya center known as Chan Chich. The site is best known to the public and to tourists as the location of a top-ranked eco-lodge by the same name. Less known, however, is evidence of a likely array of ancient temples, tombs and artifacts that still rest mostly unseen beneath thick vegetation and rubble that has cloaked their features through centuries of time. Their only inhabitants now are small bats and spider monkeys.

Before the lodge, access to the site was best approached with machetes and canoes. This was only the domain of loggers, pot hunters, and grave robbers. Then, an old logging road, originally created by logging operators through the Belize Estate and Produce Company, was reopened, and Chan Chich was rediscovered.

Like so many other Maya sites, it was a target for looters. When rediscovered, three structures thought to be temples showed strong evidence of looting -- vertical slit trenches were dug into their sides. A large temple in the site's Upper Plaza area, perhaps the main temple, showed clear signs of intrusion into one or more burial chambers. This temple features a painted frieze that skirts around a low interior ceiling. 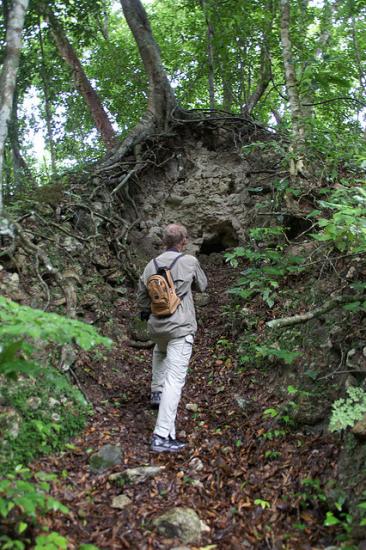 From 1996 to 2001, Dr. Brett A. Houk of Texas Tech University conducted research at the site. In 2012, a team of archaeologists and students under Houk's direction returned to the site to excavate at two locations related to the settlement. The first, located in the Upper Plaza, was a deeply buried midden, or trash deposit. It had been previously radiocarbon dated to 770 BC, firmly within the Maya Preclassic Period, a time when great early Maya centers such as Kaminaljuyu in Guatemala were reaching their apogee. The other location, about 1.6 miles west of Chan Chich, was a smaller structure called Kaxil Uinic, where research is being focused on much later periods of time, including a time when it is thought that the area was abandoned around AD 850, with "subsequent visits to the site by pilgrims who placed incense burners at the base of a carved stela centuries after the site had fallen into ruin". [1]  Also found was a historic Maya village, utilized as recently as 1931 as a chicle harvesting camp.

Work will proceed in the area of Chan Chich for seasons to come. Reports Houk, et, al., "Although the 2012 season has just ended and analysis of the findings is underway, plans for 2013 are already being made. If agreements can be reached with the landowner and adequate funding can be secured, the project will complete the Upper Plaza work and conduct an intensive investigation of a large building in the Main Plaza at Chan Chich, using a variety of remote sensing techniques combined with extensive excavations. Another aspect of the work will be walking existing cut lines through the jungle (part of an unrelated seismic survey) to look for previously undiscovered Maya ruins."

"These excavations will shed additional light on the development of Maya civilization in this part of Belize," says one observer of the investigations. "A myriad of questions will need to be addressed. Who were these people in relation to the surrounding Maya centers? How did this center relate to other great Maya centers? What new findings will distinguish this place from all other Maya settllements in the region? There is so much more to come. What is still unknown is more exciting to contemplate than what has already been discovered."

Houk, under the auspices of Texas Tech Univeristy, is directing an annual field school at the site. More information about the research and the field school can be obtained at the Chan Chich Archaeological Project Field School Website.