A number of earth mound tombs excavated from the top and slope of Chailingshan and Wugongshan, where the tombs are situated at Xishan mountain, the west of Xiaoshan district, Hangzhou city, Zhejiang Province. From 31st March, 2011 to 15th June, 2012, the Relics and Archaeological Research Institute of Hangzhou City and the Xiaoshan Museum conducted rescued archaeological excavations. There is a total of fifty-nine graves, eight artifact clusters, a kiln and an oven, found within thirty-seven earth mounds. Grave goods from burial pits and artifact clusters included eight hundred sixty-seven objects, while mounds and filling soils and disturbed earth contained fifty-five items. The cemetery could be dated from the Middle and Late Shan dynasty till the Early Warring States Periods, indicating that these graves may have been used for a long time. Some monumental tombs contained stone beds and wooden chambers, built with the shape of Chinese character ‘人’. Other grave categories include large stone-chamber tombs with narrow waist. These types of graves could be connected with funerary customs and administration of inhumations used in the elite cemetery of Yue state. 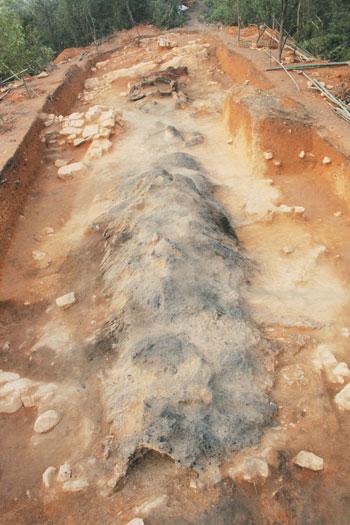 D30M1 is characterized of the monumental earth mound tomb with stone bed and wooden chamber, dating to the Late Western Zhou Period. The burial mound where the tomb was situated, oral, with longer diameter thirty-eight meter, has been preserved ca. 2.8 meter high. The mound could be divided into five layers, consisted of stone bed, white plastered burial basement, sleeper, ‘人’-shaped wooden chamber and coffin.

D30M1 is consisted of a wooden chamber with two-sided slope ‘人’-shaped structure. The burial chamber has double-layered square wood adjacent one anther closely, built both walls to the east and west. The base and top of the wooden chamber was covered with tree skins. Also, on the base of this tomb was paved with white plaster above the stone bed, 10-25 cm deep.

The ‘人’-shaped burial structure with tow-sides slope has been firstly seen in the king tomb of Yue state at Yinshan, Shaoxing. Other parallels of such kind of tomb structure may include elite graves at Qianshan, Dongyang, Longshan, Anji of Yue state. Others also have been found in earth mound tomb of Zhou Period at Jurong and Jintan, in tomb D2M1 at Dongbianshan, and D2 at Zhaihuatou, Jurong. Thus, the two-sided ‘人’-shaped tomb structure could have widely used especially for the elite group of Yue state as their burial practice. The king of Yue at Yinshan could have used by Yunchang king as his ‘Muke Dazhong’. A date of this monumental tomb could be Late of Spring-Autumn Periods, and Dongyang tomb is dated to the last phase of Spring-Autumn Periods. Anji Longshan burial has been identified to the early of Warring States Period. D30M1 has been dated to the Late of Western Zhou Period, this tomb could be identified to the earliest one, which was used such kind of burial construction.

D36M1 is a monumental earth mound tomb, consisted of stone chamber, dating to the Late Western Zhou Period. The tomb earth mound is characterized of oral outline, with longer diameter 35.5 meter, shorter diameter 23.56 meter, 3.75 meter high. The stone chamber, rectangular, is constituted of dromo, entrance, and burial chamber, retaining wall, protecting slop, and covering slabs. The chamber has 23.1 meter in length, 7 meter in width on the top, 8.1 meter in the base and 2.5 in height. The plan of burial is in the shape of narrow waist, including dromo, door and burial chamber. The base of tomb was an un-repaired stone as a whole. There was a layer of cyan-blue clay tiled in the center of the tomb base to the east, 0.08-0.12 meter deep. D36M1 is one of the biggest stone-chamber earth mound tombs that were excavated, but a little smaller than that found in D1 at Xiling of Yushan, Changshu. It is worthy to notice that a layer of cyan-blue soil with 8-12 centimeter deep found in the tomb base of D36M1 which may have the function of damp-proof. This phenomenon has not been seen in the past material associated with stone-chamber earth mound tomb. Therefore, the burial practice used in D36M1 is not often seen. 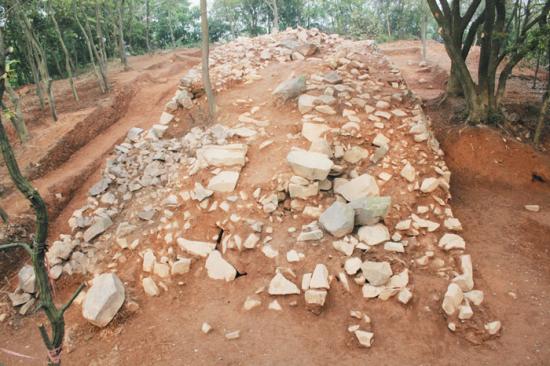 D35M1 could have been a stone-framed tomb, dating to the Late of Western Zhou Period. The tomb was located in an oral earth mound, with longer diameter ca. 17 meter, with short diameter 8.58 meter. The remained height of the mound is ca. 0.9 meter. The mound could be divided into three layers. D35M1 was consisted of dromo and stone frame. The stone frame was constructed directly on the bedrock, 8.12 meter long, 1.88 meter wide, and 0.35 meter deep. When the stone frame existed, the bedrock was repaired. The dromo was built adjacent the south of the stone frame to the west. It was rectangular, 3.64 meter long, upper part 1.6-1.95 wide, with the base 1.44 meter wide, and 1.42-1.65 meter high. Such kind of funerary practice like stone frame with stone-built dromo in front has been rarely seen in the past. The tomb was built in the earliest time.

On the basis of the mortuary location choices, extends of burial mound, tomb types and size, quality of the funerary goods settings, quantity of burial goods, it is clear that the cemetery could be divided into three ranks: high-ranked elite tombs, such as D30M1 and D36M1; the elite tombs such as D29M1, D31M1 and D35M1; graves of normal people, such as D6M1 and D17M4.

The earth mound tombs found in Chailingshan and Wugongshan could be regarded as an important result for the Archaeology of Shan & Zhou dynasties in the south China. There is a variety of mortuary types, and there is no lack of date sequence of these tombs, i.e., from the middle Shang till Early Warring States. The excavation of the cemetery has provided significant meaning for the mortuary custom of Shang-zhou culture in the South China. The various burial types could be seen as substantial material for the contents, characteristics, evolving sequence and clan of the earth mound tombs used in the South China. This discovery of a great quantity of typical artifacts provides substantial material for the origins, spread and technology of China primitive porcelain. Meanwhile, the work supplies material for the spread and evolution of the stamped hard pottery. These two tombs, D30M1 and D36M1, were found with monumental size and well preservation. They have been identified to be high-ranked elite tombs. Their discovery provides new material and clue for the study of the mortuary practice used by the elite group during Shang&Zhou Periods in Yue area.         (Translator: Sang Li)