If there is one thing that is certain in Sindh, it is that you never know what lies beneath the surface. So when French archaeologists stumbled upon a monumental mud-brick structure in the rural hinterlands of Nawabshah district last year, they recalled the comments of the man who last excavated the site – in 1936. British Archaeologist Ernest Mackay described this very edifice as a means of protection from floods. But as the French mission dug deeper, they learnt that there was more to it. By January 2017, they had unearthed a vast network of rooms of different sizes dating back to the earliest phase of the Indus Valley civilisation (2500-2300 BC). In some of the rooms, they found thousands of gemstones used for bead manufacturing. These stones, composed of minerals such as steatite and chalcedony, were not indigenous to the region. “The layout is unusual in comparison to Moenjo Daro,” explains Aurore Didier, head of the Indus Basin Mission, referring to the mysterious structure. Didier is encamped in Karachi after having completed field operations for the year. “We have not come across such architecture before,” she continues. “We think we may have found a large factory here, in Chahun jo Daro.” 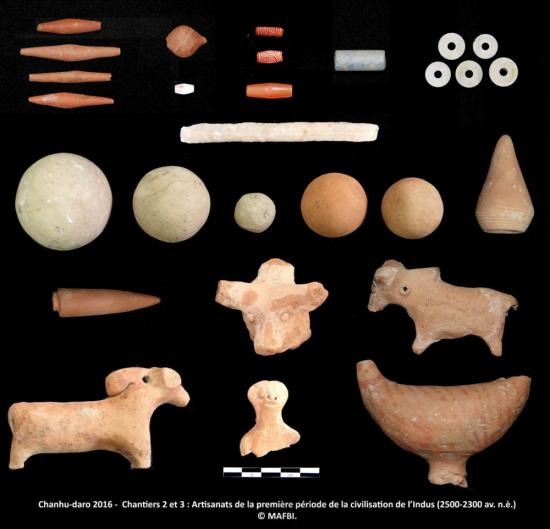 Didier belongs to a second generation of French archaeologists conducting excavations in Sindh and Balochistan. Her predecessors, Casal and Jean Francois Jarrige discovered a cluster of Neolithic sites in Balochistan between 1968 and 1974. Pirak, Mehrgarh and Nausharo provided a complete sequence of occupation from the 8th millennium BC till the middle of the first millennium BC – i.e. 8000 BC to 1000 BC. “Mehrgarh provided the earliest evidence of dentistry in the entire world,” says Didier. At an international seminar in Lucknow in 2006, titled ‘First Farmers in Global Perspective,’ Jarrige presented a paper in which he mentioned having found “eleven drilled molar crowns from nine individuals,” in the graveyards of Mehrgarh. “The Indus Valley civilisation was a continuation of Mehrgarh,” explains Didier. This is why the Indus Basin Mission is focused on highlighting the connection between pre-Indus and Indus period sites in Sindh and Balochistan.

“For the last 20 to 30 years, researchers have focused on how the Indus civilisation met its demise,” says Didier, which she believes occurred due to changing climatic and socio-economic conditions. “But little is known of the civilisation’s origins. In archaeological literature, the Indus civilisation is referred to as a single period – ‘the mature Indus period’ – without any change in architectural or material culture in over 700 years,” she continues. “But,” she asks, “how is it possible that there was no change in architecture, crafts and pottery over such a long period?” Her team has demonstrated that there are different pottery designs associated with each of the three Indus periods, from 2500 BC till 1900 BC. “The first period is the least documented one, not only in Sindh, but in all of Pakistan.” The reason for this, she explains, is because it lies buried below metres and metres of architectural deposits dating from later periods of the Indus civilisation.

The high water table in most parts of the province hinders access to these hidden layers. This is why the mission wants to focus its field operations in an area that does not have a high water table, such as Karchat, in the Kirthar foothills of Jamshoro district. “At the moment, we are conducting explorations in Karchat to identify sites dating to pre-Indus and Indus periods that could potentially be excavated by our team next year,” says Didier.

A high water table around the site of Moenjo Daro prevents deep excavation of the site. If water surfaces during excavations, it could damage the mud-brick architecture of the lowest layers. This, Didier explains is partly the reason why most of Moenjo Daro remains unexcavated. “Nobody has the budget
anymore to excavate the site in its entirety and besides, there is really no need to do so,” she says. “This is because after excavations, there is the problem of conservation. Even if there are funds from Unesco and other departments, it is impossible to do a complete restoration of all the remains at Moenjo Daro, because it would take a lot of time and money.” She further adds, “Accessing the remains of the first Indus period literally means that you will have to remove all the layers on top and you cannot do this on a Unesco site.” Didier points out that whereas Moenjo Daro undergoes restoration every year, there have been no conservation or restoration programmes in sites such as Chahun jo Daro.

In the case of Chahun jo Daro, there has been no restoration for 80 years and the excavation done by Mackay has vanished. This, according to Didier, is partly due to erosion and partly due to the dismantling of bricks by locals who were not aware of the historical site. “Some layers in sites that were excavated 80 years ago, were destroyed 30 to 40 years ago. So the authorities today are not responsible for the damage done to these sites,” she clarifies. “However, they can do something to better preserve what is remaining of them.” Although the previously excavated area of Chahun jo Daro is a mere 300 metres by 200 metres, Didier confirms that the real size of the site is in fact much larger and lies beneath the surrounding agricultural land. “Our excavations – conducted in six weeks, with the help of 30 workers from surrounding villages – covered an area of over a thousand square metres,” says Didier. “Our objective is to uncover the entire factory, but to do this we need to find a larger budget.”

The Indus Basin Mission’s programme is carried out in cooperation with the Exploration and Excavation Branch of the Culture, Tourism and Antiquities Department of the Government of Sindh. But the excavations carried out by the French mission are financed solely by the French Ministry of Foreign Affairs, as are its training programmes of local students. The Culture Department only provides logistical help – security, vehicles, tents and tables. When I ask Didier why the local department has not contributed a single rupee for excavations or training, she chooses not to comment. Instead, she maintains that she is grateful for whatever help the department has provided. “We are working hard to achieve true Pakistani-French cooperation,” she emphasises. Last year, the French Ministry of Foreign Affairs provided three scholarships for local students who also received training in Didier’s lab for three months.

The French mission makes up for the consistency and expertise lacking in Sindh’s Ministry for Culture, Tourism and Antiquities, which is constantly in sway to winds of change. Even though Didier has met as many as seven or eight secretaries of culture since she started working in Sindh, she does not ask why. “We do not get involved in politics,” she maintains, speaking on behalf of the French mission. And it is the mission’s ability to surf above political undercurrents that has given it its longevity. Nor is she critical of the Conference on Moenjo Daro, held from February 9-11. What she cannot fathom, however, is the fact that local archaeologists, from the University of Sindh, Jamshoro, and Shah Abdul Latif University, Khairpur, who have done considerable work, were not invited to speak at the conference. Instead, only foreigners were highlighted.

Various local heritage enthusiasts who attended the conference and requested not to be named, pointed out that the individuals designated by the Culture Department to oversee the project, belonged to various independent organisations and were not archaeologists or specialists on the Indus civilisation. How then, could they define strategic plans for the future? According to these attendees, the souvenirs alone are estimated to have cost Rs. 800,000. They alleged that the conference benefited those who were not involved in field research in Pakistan, while some of the foreigners that were invited have never carried out excavations in Pakistan. Some well-funded independent institutions and foundations allegedly organised events such as the Conference on Moenjo Daro to promote themselves and collect more funds.