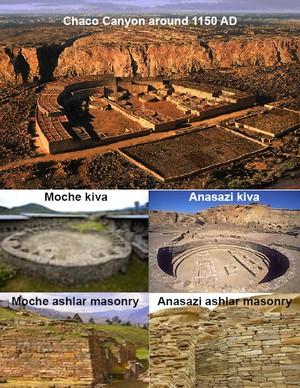 The stone masonry of Chaco Canyon bears a strong resemblance to that of the Moche in South America.

Was Chaco Canyon culturally related to the Pacific Coast of South America?

In the April 1, 2010 article on the Early Farmers of the Southwest, it was pointed out that until 800 AD the architecture of the indigenous peoples of the American Southwest was quite primitive. Most structures were simple; one room homes built from adobe walls and sapling shed roofs.  After 700 AD some Southwestern communities built up to fiver residential units together on isolated farmsteads.

Somewhere around 750 AD a new cultural influence entered the Chaco Canyon. The relatively small number of residents was a direct continuation of the Basketmaker Culture peoples.  However, they started building crescent shaped, single story apartments containing 4 or 5 units built around small kivas.  Some pottery making occurred for the first time. Construction methodology changed from post frames with adobe packed around to them to fine stone ashlar masonry constructions. Kivas are round, subterranean spaces used for ceremonial purposes.

Around 900 AD, the population growth of the region accelerated as there was a simultaneous flowering of the culture.  Construction began on the Pueblo Bonito mega-structure.  Traditionally, the semi-circular shaped building has been labeled an apartment building by archaeologists.  However, three dimensional studies by architects of the so-called “apartment buildings” of Chaco Canyon have revealed that they actually had very few residents in proportion to their size.  Pueblo Bonito could have had as few as 50-70 residents solely residing on its ground floor. The most likely use of the upper levels was storage rooms for food reserves or spaces for ceremonies.  Very few of the upper rooms have hearths for cooking or heat.

Chaco Canyon appears to have been the location of the cultural elite that dominated a large area of the Colorado Plateau between 900 AD and 1250 AD.  Food production, by necessity, was dispersed over the region among many medium and small villages.  The production of turquoise jewelry and trade stones seems to have been concentrated in Chaco Canyon.

External influences on the people of Chaco Canyon

The study of Southwestern indigenous peoples suffers from the same problem as the study of Southeastern indigenous peoples.  The “peer review” system has encouraged scholars of recent generations to quote each other rather than do original research. The “copycat” syndrome is accentuated by the proliferation of amateurs, who write books or create web sites on the Southwestern Indians. Journalists replicate these statements and past them on to the general public.

One of the favorite quotes found today, even among archaeologists, is that “beginning around 900 AD Mesoamerican type architecture appeared in Chaco Canyon.”  Amateur web sites go a step further and state that the buildings of Chaco Canyon are typical Toltec architecture. Mesoamerican means the indigenous cultures of central Mexico, southern Mexico and upper Central America.  The statement is justified by the discovery of parrot skeletons and some artifacts believed to have originated in Mexico.  The teeth of skeletons that archaeologists believe belonged to Chaco Canyon’s elite were filed and sometimes inlaid with turquoise in a manner similar to Mesoamerican elites.

The people of Chaco Canyon very likely traded with the peoples of northern Mexico.  However, the people of northern Mexico were NOT Mesoamericans.   Parrots once lived along the coasts of northern Mexico, but the region was not typified by large temples and advanced cultures. Those people could have obtained parrots and Mesoamerican artifacts through village to village trading.  As was pointed out in the April 1, 2010 article, the Valley of Mexico (Toltec Empire) is much closer to the frontier of the Southeastern Ceremonial Culture than it is to Chaco Canyon.  Because Chaco Canyon was once owned by Spain, and for a brief time, by Mexico, the general public thinks of it being close to the cultural heart of Mexico.

The architecture of Chaco Canyon during its fluorescence (900 AD – 1250 AD) bears no resemblance to Totonac, Toltec or Post Classic Maya architecture – its contemporaries.  The Mesoamerican cultures did not build freestanding ashlar masonry walls. Their temples were constructed on solid earth & rubble pyramids.  Both commoners’ homes and temples were [post, wattle & daub,] [prefabricated post ditch] or [stacked stone rubble plastered with lime plaster to hold them in place.]

Where one does find fine stone ashlar masonry construction is on the Pacific Coast of Peru and Colombia.  Ashlar is common immediately prior to the sudden cultural changes in Chaco Canyon.  The later cultures, such as the Incas, tended to use much larger dressed stones in their construction.  This known as coursed asymmetrical stone construction.

The Wari Cultural Period South America’s Pacific Rim lasted until about 1000 AD.  However around 800 AD it began to become unraveled. Several ethnic cultures flowered within the loose political controls of the Wari.  These included the LIma, Moche and Nazca.  Commoners and refugees from less sophisticated small towns could have easily paddled or sailed up the coats of Mexico to reach the outlet of the Colorado River in the Gulf of Baja California.  The Purepeche arrived on the western coast of Michoacan State about the same time that Chaco Canyon began construction of large ashlar buildings. The Purepeche also constructed buildings from ashlar.

Sub-surface round kivas, stone interior walls and tee-shaped doorways are the architectural signatures of buildings constructed in Chaco Canyon. They also may be found in Peru during the period from 100 AD to 1000 AD, and to a lesser extent until the early 1500s when Peru was conquered by the Spanish.  Human sacrifice also has a long history in Peru.  Some evidence of human sacrifice and cannibalism has been found at Chaco Canyon.

The only absolutely certain way to prove a South American ancestry for the elite of Chaco Canyon would be comparative DNA analysis.  Until then it must remain a theory that fully explains the high culture at Chaco Canyon. 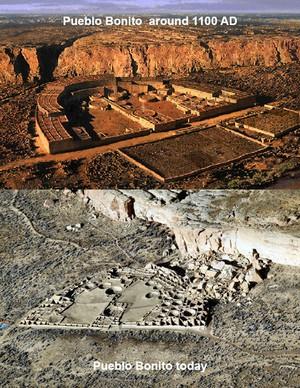 In 1849, U.S. Army Lieutenant James Simpson was exploring northwester New Mexico when he came upon Chaco Canyon.  He noted eight large ruins, seemingly built by an ancient, unknown civilization.  The local Navajo’s and meztiso’s called the largest ruin, Pueblo Bonito, which means “pretty village.” Pottery shards on the soil surface of Chaco Canyon suggested that it was Native Americans who built the large masonry structures, but for several more decades, a wide range of fanciful stories accompanied interpretations of the ruins which assigned their origin to Romans, Vikings, Egyptians, Celts, Welsh and the 10 Lost Tribes of Israel.

In 1896 rancher Richard Weatherall and student George Pepper began excavations at Pueblo Bonito under the sponsorship of the American Museum of Natural History. The excavations were financed by the Hyde Brothers and continued until 1900. Considerable damage was done initially because the two were only looking for intact “trophy” artifacts to either sell or send back to the museum in New York.  However, the two men did photograph and map about 1/4th of the rooms within the structure. As the two became more experienced in archaeology, their excavations methods did less damage to the archaeological evidence.

Weatherall eventually applied for a homestead patent from the U.S. Land Office in order to own 161 acres of Chaco Canyon. Samuel Holsinger of the Land Office studied the site and found archaeological features that Weatherall had missed. He recommended that Chaco Canyon become a national park. The patent was invalidated in 1904 and the land was taken over by the United States government.  In 1907 President Theodore Roosevelt signed an executive order creating the Chaco Canyon National Monument. Weatherall operated a trading post and tour guide service from the edge of the federally owned property until his death in 1910.

Professional archaeologists, sponsored by several universities and museums periodically worked on the Chaco ruins during the 20th Century.  The University of New Mexico was one of the more important sponsors of these studies.  As the technological skills of archaeologists improved, their excavations gained more factual information and increasingly less intrusive.

In 1980, 13,000 acres were added to the original tract of the national monument.  The newly expanded reserve was then designated the Chaco Canyon National Historical Park by Congress.  The archaeological zone is managed by the National Park Service.

It is now known that when construction was started on buildings in Chaco Canyon around 850 AD, the canyon was a forested valley with running streams.  Archaeologists believe that humans completely deforested the valley to obtain fuel and construction materials.  A drought in the early 1200s AD lowered the water table and made the land unsuitable for agriculture.  It continued to be a desert into the late 20th century.  The National Park Service is now planting vegetation in an effort to at least partially return the canyon to its original ecological state.

Pueblo Bonito is one of eight ‘Great Houses” in Chaco Canyon and is semi-circular in shape. The core of the structure is a massive stone masonry wall, which is aligned to the solar north-south axis. It covers roughly 2 acres and in its final form is up to five stories tall.  The walls are load-bearing ashlar masonry bonded with clay mortar.  The floors are primarily timber joists, in-filled with saplings, vegetative lathing and adobe. Estimates of its architectural contents vary from 600 to 800 rooms.  The variance is caused by the damage from the collapse of a rock cliff on a section of the ruins in 1947.

The National Park Service believes that Pueblo Bonito was constructed between 850 AD and 950 AD.  The original structure was a single story semi-circle.  Later construction added three to four more stories.  There are features in the structure which appear to be markers for following  the cycles of the sun, moon and planets.

The floor plans of Pueblo Bonito consist of terraced rooms overlooking a raised plaza and cluster of kivas.  Kivas were recessed, round rooms use for rituals. There were no entrances to the apartments from the curving exterior wall.  All were accessed from the inner plaza. The plaza itself is terraced into three levels and contains both large and small kivas.

For many decades, Pueblo Bonito and the other “Great Houses” of Chaco ‘Canyon, were believed by archaeologists to be massive apartment buildings. However, the archaeologists were puzzled because many rooms did not contain hearths, as would be expected in occupied apartments. In recent years, three dimensional analyses by architects have suggested that only 70-80 families lived in the structure, primarily on the lower level.  Families occupied 3-5 rooms as apartment units.  The other rooms were used for communal storage, or perhaps rituals.

During the past two decades, archaeologists have found proof of either direct or indirect trade between outlying villages and Mesoamerica.  Perhaps half of the ceramics found in the rooms of Pueblo Bonito were made with clays from outside the canyon.  Some cylindrical jars typically used by Mesoamerican traders have also been found. Archaeologists have also found the skeletons of parrots native to Mesoamerica, plus several artifacts which probably were fabricated in central Mexico.  In 2009 residue of cacao (cocoa) powder was found in some Mesoamerican type cylindrical jars.  This discovery proves that the elite living in Pueblo Bonito consumed this prestigious beverage that was only grown in the tropical regions of Mesoamerica. As archaeological work and analysis of artifacts continues in Chaco Canyon, probably many other discoveries will be made that will broaden our understanding of this remarkable community.