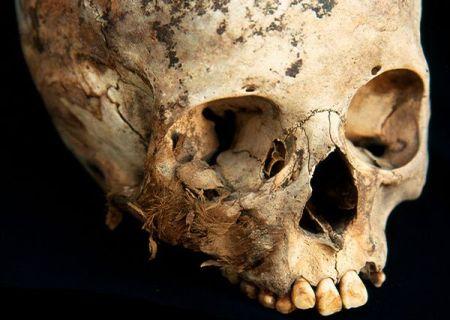 The skull of a child sacrificed at around 9 years of age. Photograph courtesy Haagen Klaus 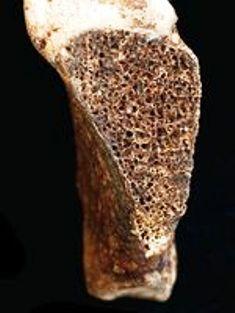 The skeletons of dozens of children killed as part of a ritual bloodletting sacrifice a thousand years ago have been discovered in northern Peru, a new study says.

The remains are the earliest evidence of ritualized blood sacrifice and mutilation of children that has so far been seen in the South American Andes, according to study leader Haagen Klaus.

Seeds of a paralytic and hallucinogenic plant called Nectandra, which also prevents blood clotting, were found with the skeletons, suggesting the children were drugged before their throats were slit and their chests cut open.

During the sacrifices, sharp bronze knives were used to hack the children to death. One skeleton had more than 25 cut marks on it. A few had their hands and legs bound with rope.

"It is so beyond what is necessary to kill a person. It really gives you the chills," Klaus, an anthropologist at Utah Valley University in Orem, Utah, told National Geographic News.

"But we are trying to understand this on their terms, not ours."

Eighty-two skeletons of the Muchik people—including 32 that were mostly or completely intact—have been discovered since 2003 at the Cerro Cerillos site in the Lambayeque Valley on Peru's arid northern coast.

It's unclear why their chests were cut open, but it may have been to cut out their hearts, Klaus said.

"When the Muchik began to sacrifice children, it's possible they were not sacrificing people in their eyes, as strange as it sounds," he said in an email.

After the bloodletting was over, the children were allowed to mummify in the desert air for at least a month, the study concluded. Empty fly pupa were found with the kids' remains, indicating that maggots ate their flesh during natural decomposition.

In ancient beliefs, the hatched fly carried deceased children's souls away and signified a reverent burial, according to Klaus.

Llama remains were also found with the bodies, suggesting that the funerals of many victims were accompanied by "solemn and very serious" feasts that included llama meat, Klaus noted.

The heads and legs of llamas were "given" to the dead, presumably to feed them in the afterlife.

More than 80 sacrifices from A.D. 900 to 1100 were carried out by the Muchik people, who occupied the northern coast after the fall of the Moche.

The Moche were independently governed agricultural societies that ruled the region from about A.D. 100 to 800.

The Moche culture's political and religious ideology had started to disintegrate around A.D. 550, in the wake of a devastating El Niño, a cyclical phenomenon that can dramatically alter climate.

But some parts of the Moche culture persisted in the Muchik—including human sacrifice. The ritualistic killing of war captives had played a major role among the Moche elite as a way to appease ancestors and natural spirits, experts say.

The Muchik apparently developed a variation on the Moche sacrificial theme by sacrificing children, according to Klaus.

Muchik Left to Own Devices

The Muchik were able to develop their own rituals despite their rule by the ethnically distinct Sicán people, which began in A.D. 900.

While the Sicán also conducted human sacrifice, the methods of killing and settings contrast with those of the Muchik, Klaus said.

The Sicán, who likely had ties to what's now southern Ecuador, "came in during the power vacuum following the final Moche disintegration, and within a hundred years they created a powerful economy that rivaled that of the Incas 400 years later," Klaus said.

The Sicán leaders focused largely on trade and were more skilled in metallurgy, fishing, agriculture, and llama herding. This focus on economics left the Muchik to their own ritual devices, Klaus said.

The Sicán's hands-off colonalism "is a completely different way of running a state than from what we are used to in the western system," Klaus said.

Edward Swenson is an archaeologist at the University of Toronto in Canada who studies the Moche.

"Archaeologists have a tendency to reduce ritual to ... political control or resistance," he said in an email.

"Obviously, there is much more to religion than simply political ideology."