Ceren (Salvador) : an ancient roadway that may solve the mystery of how the villagers survived a sudden volcanic disaster.

A University of Colorado anthropologist who worked through Central America's civil wars of the 1980s to unearth a 1,400-year-old Mayan village has made another unexpected discovery: an ancient roadway that may solve the mystery of how the villagers survived a sudden volcanic disaster.

A scalding blanket of ash from the volcano erupting around A.D. 630 froze the farming village of Ceren — in what now is El Salvador.

CU's Payson Sheets and his teams over three decades have found evidence the Mayans were in the middle of a harvest feast — deer bones, red body paint, deer headdress for dancers, an alligator-shaped caldron — when the volcano blew up from beneath a river.

No bodies have ever been found.

The road Sheets' crew found in July may have enabled a rapid escape. He now is proposing an intensified scientific hunt — targeted digging along that 7-foot-wide road — for the remains of fleeing villagers.

"It's possible almost everybody escaped and survived," Sheets said Thursday in his lab. 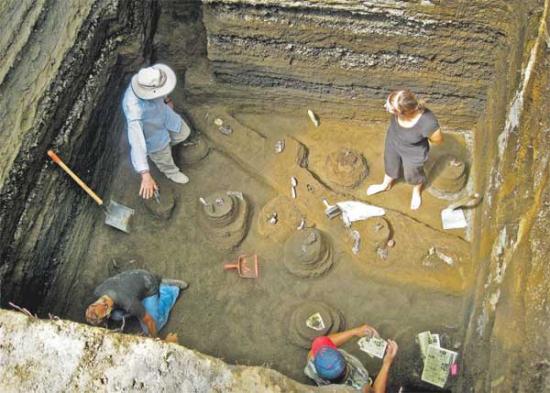 This sacbe portion includes a drainage canal to the left and corn plants preserved in ash to the right. (Photo courtesy of Payson Sheets, CU)

The point of unraveling this mystery, he said, is to understand more fully how Mayan civilization sustained itself for nearly 5,000 years — far longer than modern industrial empires.

He compared the Mayan villagers' plight when hit by a volcano with those of Louisiana residents hit by Hurricane Katrina in 2005 — modern Americans who in many cases waited for and relied on federal authorities. Ceren residents, in contrast, may have been accustomed to responding rapidly on their own initiative to environmental change — inclined toward a 2-kilometer survival dash down the roadway to safety at the first sign of eruption.

The road, above, called a "sacbe," or "white way," was built with volcanic ash and had ditches alongside for water. It was found by a team led by CU professor Payson Sheets. (Photo courtesy of Payson Sheets, CU)

"Decision-making is with the family in a village," Sheets said. "If they got out, it means they decided on the spur of the moment what to do — and did not wait for the king or priests to tell them what to do."

The roadway was discovered when Sheets' crew of 23 El Salvadoran locals was digging a pit to reveal more about Mayan agriculture. A digger with a pick hit a hard, white surface.

Sheets first stumbled onto the site around 1976, and after radiocarbon and other testing, United Nations officials in 1993 declared Ceren a World Heritage Site described as the "Pompeii of the Americas."

El Salvador's civil war broke out amid early excavations. Sheets won support from both sides — the U.S.-backed military-led government of dictator Jose Napoleon Duarte and a group of Soviet-backed left-wing militias. All wanted to understand Mayan heritage — even as combat terrified villagers and killed 75,000.

"I'm not so interested in that stuff. I'm pretty anti-elite," Sheets said. "I want to know what the other 90 percent of the population was doing."

The traditional focus on kings and priests at sites such as Tikal, in Guatemala, led to an understanding that Mayan civilization was autocratic, with people depending on rulers to act.

Sheets contends Mayans likely were more democratic, citing evidence of town councils that suggested individual farmers had an ability to adapt on their own.

At Ceren, villagers' survival of the volcanic eruption may reflect that decentralized power structure, Sheets said.

Ancient villages "where Mayans had the shared government seemed to have been more stable," he said.