Centuries Before China's 'Great Wall,' There Was Another 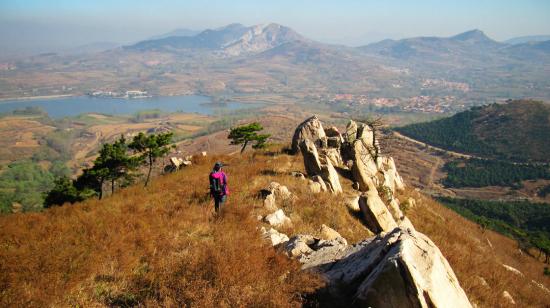 The Great Wall of China, built more than 2,000 years ago, stands as one of the monumental feats of ancient engineering. Stretching thousands of miles, it protected the newly unified country from foreign invaders.

But before the Great Wall, warring Chinese dynasties built many other walls for protection. An American archaeologist recently began surveying one of the biggest.

Gary Feinman, who is with the Field Museum of Chicago, didn't set out to excavate what he now calls "the first Great Wall." He was simply walking around eastern China's Shandong province, staring at the ground like any good archaeologist, looking for tiny pieces of pottery.

But two years ago, he came across an earthen wall. In some places, it was 15 feet high. People knew there had been an early great wall in Shandong, dating to about 500 B.C. — built centuries before the Great Wall. What Feinman discovered seemed to be a part of that early wall. "By walking this part ... we have seen how well designed it was," he says. "It really runs along the higher ridge-tops of these very craggy mountains in eastern Shandong. In the upper reaches of its run, it was amazingly well preserved."

Feinman has, essentially, adopted the wall. He's been tracing its path, mapping it, and thinks it may extend several hundred miles. "Nobody has done that before," Feinman says. "Nobody has seen how it snaked ... through such a large area."

The Chinese who built the wall used a technique called "rammed earth." Workers apparently got fine-grained soil from lower elevations and carried tons and tons and tons of it up to the ridge tops, where they dumped the dirt in piles. Then they started beating these piles until they were exceedingly hard, Feinman says – creating a wall tough enough to survive 2,500 years.

Construction like that across hundreds of miles took lots of manpower. Gideon Shelach, an archaeologist at the Hebrew University in Jerusalem, says the leaders of the Qi dynasty (which oversaw the building of the wall) had plenty of hands that they needed to keep occupied.

"They were very good at recruiting people for war, first of all," Shelach says. With so much manpower, he says, the leaders could do anything else they wanted to do, too, "so they started building those walls." 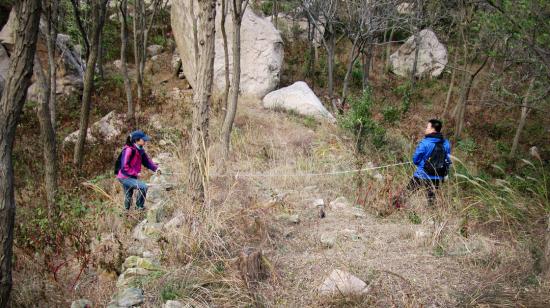 Unlike the Great Wall that would follow in 300 years, this "Great Qi Wall" was not built to keep out foreign invaders. "It was a wall between large, existing states," Feinman says.

Regional dynasties of the time employed ever-expanding armies, and were constantly at war until a very tough guy named Qin Shi Huang put a stop to it, with what Shelach says was an almost unimaginably mighty army.

"The army of the Qin that conquered all the other states had [something] like 1.5 million soldiers fighting on different fronts for 10 years," Shelach says.

Qin Shi Huang unified the regional states in 221 B.C., and created — naturally — the Qin Dynasty. Qin's soldiers were the living models for the famous terracotta warriors that were discovered in 1974. Those statues were buried along with Qin Shi Huang when he died. But before he died, Qin realized that good walls make good neighbors. He started building another wall in the north — even bigger than the Qi wall — and that second barrier eventually became part of the Great Wall that people know today.

Feinman says the Chinese public is interested in rediscovering the earlier Qi wall, though there's a lot of building going on in rural China that threatens to swallow up parts of it. That may not be a bad thing, according to Feinman.

"Oddly enough," he says, "parts of [the Qi wall] now serve as the base for dirt roads connecting communities. So what was once a means of keeping people apart is now a way of bringing them together."