A newly catalogued 1541 book, written by Erasmus (left) has pages ripped out, text blotted out with ink and two pages glued together. This book is now in the Thomas Fisher Rare Book Library at the University of Toronto. A 1538 book in which Erasmus introduces the writings of fourth-century Saint Ambrose. In it Erasmus' work is censored but this time with great beauty, with watercolors and baroque frames; it is now at the Centre for Renaissance and Reformation Studies, also at the University of Toronto.
CREDIT: Owen Jarus (left); Pearce Carefoote (right)

More than 400 years before modern-day governments tried shutting down blogs or blocking tweets, two people tasked with censoring a sometimes-critic of the Catholic Church in Renaissance Europe took to their duties in very different ways: one with great beauty, the other with glue and, it appears, a message.

Born in Rotterdam around 1466, Erasmus was a prolific writer who sought out wisdom in ancient Greek and Latin texts. His writings, mass produced thanks to the printing press, were at times critical of the Catholic Church.

By the time he died in 1536 the church was breaking apart, with splinter groups known as Protestants coming into conflict with the Catholics. English king Henry VIII was one of the most famous examples of a Protestant, creating a Church of England separate from church authorities in Rome

The conflicts that ensued between Catholics and Protestants were fought, not just with guns and swords, but with ideas, especially the printed word. Erasmus was considered by some to be a Protestant sympathizer, and in 1559 his texts were put on a Roman index of forbidden books. Both sides tried to censor each other whenever they could, with the Catholics being somewhat more effective, at least during the 16th century.

"They had the agents to be able to do it," said Pearce Carefoote, a librarian at the Thomas Fisher Rare Book Library at the University of Toronto and author of "Forbidden Fruit: Banned, Censored, and Challenged Books from Dante to Harry Potter" (Lester, Mason & Begg, 2007).

Censoring with glue ... and words

One book, "Adagorium," was published in 1541 in Lyon, France, and was cataloged this month in the Thomas Fisher Library. The book contains ancient proverbs written in Latin and Greek along with commentary by Erasmus.

After four centuries the pages of the 1541 text are still stuck together. Librarian Pearce Carefoote (holding the pages) has curated an exhibition on censorship and written a book on the subject. He told LiveScience that he has never seen a case in which a censor used glue in his work. More research needs to be done to see what the glued together portion contained.
CREDIT: Owen Jarus

Parts of it are blotted out with ink, a practice not unusual for the time. However, one section was treated with particular disdain, having pages ripped out, sections inked out and two of the pages actually glued together, still stuck after more than 400 years.

"They've censored it, and then just to make sure they glued the page together," Carefoote told LiveScience. "This is the first time I've ever seen that (the use of glue)."

If that wasn't enough, the censor appears to have left a message on the front, written in Latin, blasting Erasmus. It reads (in translation), "O Erasmus, you were the first to write the praise of folly, indicating the foolishness of your own nature." One of Erasmus' works was called "The Praise of Folly."

Carefoote cautioned that the message could've been written by another person, though the ink seems to match that of the censor. From the style of writing Carefoote thinks the censorship may have occurred late in the 16th century but more research is needed to firm up that date.

Erasmus' ideas on war seem to have gotten lots of ink; that section of the book begins with the adage "Dulce bellum inexpertis," or "war is sweet to those who haven't experienced it." The censorship starts out slow at first with just a sentence blotted out here and there, but picks up later with entire sections being inked over. Carefoote suspects some Catholics would not have been amused by these ideas on war.

"He would not have gone along with the basic 'just war' theories that the scholastics (a group of thinkers) had developed," Carefoote said of Erasmus.

After it was censored, the book was likely kept in a restricted library called an inferno, Carefoote suggests. That would've made reading it difficult. "Say this was kept in a cathedral library, in a Catholic town, what you would have to do is, you would have to put in a petition to one of the church officials," he said. "They would examine your reasons for why you need to see this book and they would give permission to let you read it."

The book was bequeathed to the library by the late Ralph Stanton, an avid collector of books and a mathematics professor at the University of Waterloo in Canada.

In contrast to the newly discovered glued-up book, another example of Erasmus' writing, held at the Centre for Renaissance and Reformation Studies at the University of Toronto, reveals a censor who took to his task with an artistic flourish. 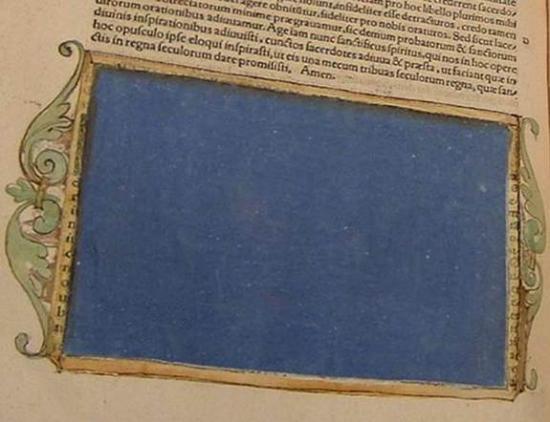 In contrast this 1538 book, containing essays by Erasmus introducing the work of St. Ambrose, was censored beautifully, this section with a blue pigment and ornately designed border.
CREDIT: Photo by Pearce Carefoote, cropping by Owen Jarus

Published in Basel, Switzerland, in 1538 this book contains essays by Erasmus introducing the writing of St. Ambrose, a fourth-century saint who was the bishop of Milan.

"It is one of the most exquisitely beautiful examples of censorship, with the offending passages obliterated using vibrant watercolors framed in baroque scroll frames with attending putti (an image of a male child)," Carefoote writes in his 2007 book. While the censor blanked out the prefaces by Erasmus he left the saint’s work alone. It's not known what Erasmus said that got him censored.It's also not known why the censor, probably a librarian, approached his job with such artistry.

This section, featuring an orange-colored pigment, has an image of at top, believed to be that of a putto, a male child.
CREDIT: Photo by Pearce Carefoote, cropping by Owen Jarus

"You have some librarians who just love books and so it could have been that the book itself he wanted to preserve in as good a state as he possibly could, so therefore he complied with the law but he did it in such a way that it was not offensive to the book," Carefoote said.

Whatever the reasons, these censors have left researchers with two remarkable 16th-century artifacts, now within walking distance of each other. Two works by the same author, both of which were censored, one with glue and the other with artistic beauty.