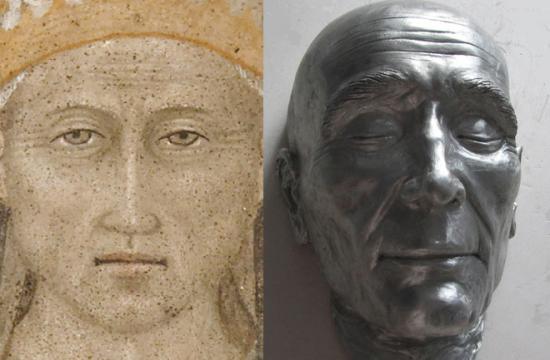 Celestine V, the hermit pope who set precedent for Benedict XVI, has been given a new face and fate by researchers who have examined his skeletal remains.

The last pontiff not chosen by a conclave — and the first to declare that a pope could rightfully resign — Celestine V is regarded as one of the Catholic Church’s most enigmatic popes.

His remains, kept in the Basilica of Santa Maria di Collemaggio in L’Aquila, Italy, did not show his real face, but a wax mask with the likeness of Cardinal Carlo Confalonieri, the Archbishop of L’Aquila from 1941 to 1950.

Beneath the mask, a half-inch hole suggested that Celestine died from a nail driven through his head while he was imprisoned by his successor Boniface VIII.

“For centuries this hole on the skull has fueled speculations and legends,” said Luca Ventura, of the San Salvatore Hospital’s Department of Pathology in L’Aquila. “But our analysis found no trace of the murder engineered by Boniface. On the contrary, we can say beyond doubt that Celestine wasn’t alive when the lesion was made.”

According to the researcher, the morphology of the lesion clearly shows it was produced on a skeletonized skull. Most likely, the hole was made with a pointed, metallic object during one of the many reburials of Celestine’s bones.

Relying on forensic techniques and laser scanner, another team of researchers led by Sergio Tiberti, of the L’Aquila University and Giulio Sacchetti, of Rome’s University Tor Vergata, used the skull to reconstruct Celestine’s face in the form of a silver mask.

“The laser scanner virtual reconstruction produced the face of a 50 year old man,” Marino Di Prospero, an artist who had already worked on funerary masks of mummified saints, told Discovery News. “The information was useful to age a model which was made with traditional forensic techniques,”

“The result is the serene face of a nearly 90-year-old man who can still inspire emotions,” Di Prospero said. “That was quite an artistic task.”

Born in 1209 as Pietro Angelerio, also known as Pietro da Morrone, Celestine accepted the papacy in 1294 at age 85 after having lived as a hermit monk in a cave in the Abruzzi mountains.

He was chosen to succeed Nicholas IV by desperate cardinals eager to break the stalemate of an electoral conclave that had gone on for more than two years.

Weakened and manipulated by Charles II, King of Sicily and Naples, Celestine soon realized the mistake he had made. Five months after he was elected pope, he stepped down, citing “deficiencies of physical strength” and “longing for the tranquility of the former life” among the reasons for his decision.

Cardinal Benedetto Caetani, who had engineered the abdication, was promptly elected his successor with the name Boniface VIII.

Celestine could not enjoy tranquility in his final months. Fearing a schism, Boniface ordered the abdicating pope to be imprisoned.

Celestine went on the run for 9 months but was eventually caught and imprisoned in the castle of Fumone, which belonged to Boniface. He died there in May 1296, 18 months after his abdication.

“We can’t establish the real cause of death,” Ventura said. ”A previous research carried test for heavy metal poisoning with negative results.”

Life at the fortess might have however worn out Celestine.

“Contemporary sources cite pneumonia and a possible hemiplegia (paralysis of one side of the body),” Ventura said.

Analysis on the remains revealed that Celestine was 5 foot 5 inches tall and suffered from chronic sinusitis, parodontopathy, vertebral arthritis and Schmorl’s nodes, which are herniations of the intervertebral disc likely caused by weight carried at a young age.

Canonized in 1313, following Philip IV of France’s nomination for sainthood, Celestine did not rest in peace.

In 2009 the glass casket containing his remains was found intact under the debris and rubble produced by the devastating earthquake that struck the Abruzzo region.

Wearing the silver mask with his new face, his bones hidden under papal vestment which include the pallium donated by Benedict XVI in 2009, Celestine will now remain on display at the Basilica of Santa Maria di Collemaggio in L’Aquila.