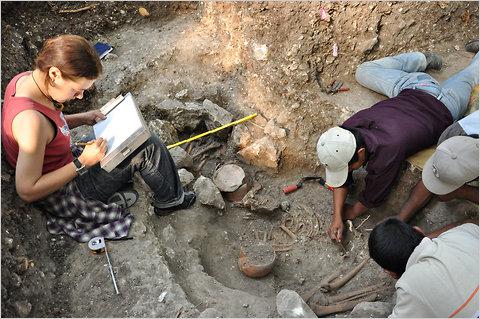 Takeshi Inomata and Daniela Triadan of the University of Arizona excavated the Maya site of Ceibal in Guatemala. In this post, they answer readers’ questions about their recent expedition.

Q. I was particularly drawn by Professor Inomata’s hypothesis that building the large pyramids helped the Mayans build their society. We can see a parallel here in the U.S. with Kennedy’s goal to place an American on the moon. Then, we did not have the technology to get it done, but aspiring for this goal helped plump our creativity, and coordinate our intellectual and fiscal resources. Once the U.S. got to the moon, the commercialization of the related technologies (video cameras, to Mylar sheets, to materials and wireless technology) helped power the U.S. to an unprecedented boom in development and economic prosperity. Rightly, we did not reach the moon because we had the technology, but aspiring for the moon helped us develop the resources to reach the moon and helped society. Certainly this has happened all over the world. Important question for the professor: Who or what was their Kennedy? And, what big pyramid should we build next?  (Arun Shanbhag, Boston)

Q. It is interesting to me to contrast the dramaturgy used by elites to rally support around themselves and the public projects, whether circuses or buildings, that seem to be a simultaneous exhibition of that power/support and a reinforcement of it. Just how were vast segments of those ancient societies, and their resources, motivated to build pyramids, conduct circuses, etc., when probably that use of resources might not have been optimal in terms of people’s objective interests? (Benjamin R. Stockton, California)

A. We can never tell who their Kennedy was, but we suspect that the experiment of building the first pyramids probably required leaders who advocated the bold project and a society that was ready for it. An important social background for this change was increasing interaction with other groups across wide areas, including the Olmecs, which stimulated the exchange of new ideas and materials. As the construction proceeded, the leaders who organized the operation may have become the early elites, with more power and prestige. So construction projects probably brought profound social changes, including the emergence of centralized, hierarchical political organization, community integration, economic development, etc.

An important point is that the ancient Maya probably did not foresee these social consequences of construction activities. In this sense, these effects were not necessarily the results of conscious manipulations on the part of emerging elites. In early Maya society, much of the labor for public construction appears to have been provided by commoners rather than slaves. The participants possibly found attraction or meaning in these collaborative operations, as well as in the feasts and public ceremonies that went with them.

A more difficult question is how we evaluate, and how the ancient Maya perceived, these changes. Were the increased social inequality and a larger community desirable for them? This is not a simple yes-or-no question. We need to think carefully about positive and negative aspects of such changes, as well as our own assumptions that underlie these value judgments. These problems possibly apply to public projects in modern societies as well. Even though the short-term effects of modern projects on economy and material conditions may be predictable to a certain degree, their long-term social consequences are often not clear. We do not think that archaeology gives an answer to the question of what pyramid we should build next, but an understanding of what happened in the past may be necessary as we contemplate our collective projects in the future and their social effects.

Q. I would like to extend the discussion into the theoretical mists of time to suggest an attempt to address the development of language and the writings of the Maya–which suggest a much greater antiquity to the society (or the rudiments of society) throughout the world of the Maya. By the time of organization for pyramid-building, ages must have passed; and ages more for the creation and distribution of the language from its origin to the walls of the structures. (D.W. Reynolds Jr., Newport News, Va)

A. You are undoubtedly right that the origins of Maya languages long preceded the emergence of the first pyramid. There must have been a long process of social changes and developments before the establishment of sedentary communities with substantial buildings, but archaeological evidence on these early periods is extremely scarce. Writing is a different matter. The earliest evidence of Maya writing comes from the site of San Bartolo, dating from 300 to 200 B.C., centuries after the first substantial public construction at Ceibal, around 1,000 B.C. Like those in other civilizations of the world, Maya writing was closely tied to the power of the ruling elite. Maya texts commonly described royal history, public ceremonies and warfare, in which rulers and other elites were protagonists. As the knowledge of technologies and various resources is closely associated with political and economic power in the modern world, the command of writing, along with the related fields of history, calendar, astronomy, etc., provided an important basis of elite power and prestige in Maya society.

Q. What do you find was the prevalence of ramón trees (now being called Maya nut) in/around your Maya cities? Ages ago a friend told me his anthropology professor was saying these nut-bearing trees probably formed much of the shade canopy that would have sheltered the old Maya cities, and they also provided much of the food. Yes? No? Sometimes? It’s not just a matter of curiosity to me. While tree crops are insensitive to moderate droughts and floods that are devastating to annuals like maize, a catastrophic disease or other similar problem for trees would mean a long-term loss of a critical food source… something primal societies would have been unable to cope with.   (Greenpa, Minnesota)

A. The analysis of carbon isotopes in human skeletal remains and the study of carbonized botanical remains from various sites indicate that at the height of Maya civilization, during the Late Classic period (A.D. 600 to 830), the lowland Maya heavily depended on maize. Although they continued to use forest resources, ramón nuts were probably not their main staple during this period. An important question that we are addressing in our research is how this heavy reliance on maize developed. The overemphasis on maize, as you note, may make the agricultural system vulnerable to climate change and pests and may lead to soil exhaustion. It is not nutritionally sound, either. Prior to the foundation of Ceibal, people probably practiced mixed subsistence combining cultivation, gathering and hunting, and they most likely used various kinds of forest resources widely. With the establishment of a sedentary community at Ceibal, did they intensify the cultivation of maize? We hope that the results of our environmental studies will shed light on this issue. 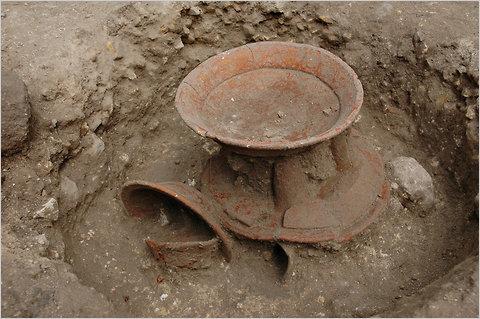 Takeshi Inomata  -   Ceramic vessels with large supports placed one over the other.

Q.  I’m wondering how similar the Late Preclassic ceramic caches and offerings at the plaza were. In the two photos, the vessel form and decorative techniques appear quite similar. I’m also curious as to whether these vessels may have been created specifically for ritual use, or whether they could also have served as functional domestic objects. Lastly, whether it was exclusively elite wares, or whether plain wares were included.  (J. Lowe, Austin, Tex).

A.  All the Late Preclassic ceramic caches (A.D. 1 to 200) that we have found in the plaza contained monochrome red vessels, which appear to have been produced specifically for these rituals. But the red paint with a waxy look that we see on these pots had been used widely, both on ritual and domestic vessels, since 600 B.C. We should reiterate that these caches were deposited at the time of a major social change in the transition from the Preclassic period to the Classic, which was accompanied by the establishment of rulership, the common use of stone monuments with inscriptions, etc. While the Maya continued to use the traditional paint, they were adopting new vessel forms, including those with large supports. By combining the study of these vessels with radiocarbon dates, we are trying to build a fine chronology of ceramics and ritual practices.

Q.  We’re interested to understand how you determined that the building was still in some sort of use while the new floor was being installed. Being in the middle of D.I.Y. renovations on our home, we’ve been racking our brains trying to imagine the signs that would lead you to your conclusion.   (Ambrit, Hattiesburg, Miss.) 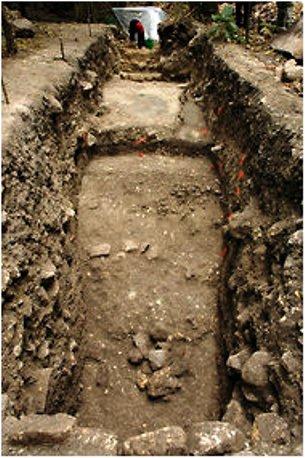 Takeshi Inomata  -   The eroded back wall of the Early Classic platform of the East Court.

A. In some cases, we find evidence of temporary abandonment. In the excavation of the East Court, we found that the back retaining wall of its Early Classic version had collapsed to be covered by eroding soils. About the same time, a pyramid in the Central Plaza was also left to erode away before its next version was built over it. It appears that Ceibal was nearly abandoned around the fifth century A.D. and was reoccupied in the seventh century. Under the heavy tropical rain these buildings deteriorate quickly without constant maintenance. This means that when we find buildings in a good condition, we can usually assume that they were in use when the next versions were built over them. But the Maya sometimes intentionally destroyed buildings before they renovated them. In some cases, it is very hard to determine whether damage was caused by intentional destruction or by erosion that resulted from disuse. In the case of the Preclassic East Court building, the subsequent floor was one of three that were laid down, abutting the building wall. Afterward this construction was completely covered by yet another floor. We did not see any signs of erosion or deterioration between the different flooring episodes, and thus think that the three floors were used during the life of the building.

Q.  In archaeology they always remember that by excavating a site, they are forever destroying, and so have to make a careful decision about whether to excavate or not. Is the same true for these lake bed samples?   (Joel, Peru)

A   The extraction of lake sediment cores is an expensive operation, and the analysis of one core is time-consuming. So environmental scientists carefully choose coring locations, as archaeologists do with their excavation units, so that they can take the best samples possible for the given coring technique. But the impact of a three-inch-diameter coring tube on a large lake bed is fairly small. This allows scientists to core the same lake repeatedly over a long period to refine their interpretations and to apply new technologies.

Q.  How many University of Arizona archeology scholarships have been provided to the local Mayan population so that they can participate at a higher level in the unearthing, preservation, study and interpretation of their ancestors’ cultural treasures? (Einstein)

A.  We have to confess, so far none. Two of our Guatemalan archaeology students have joined the Ph.D. program at the University of Arizona, and we hope to be able to admit more, particularly indigenous Maya students. But the situation of the Maya people continues to be difficult. Many of the Q’eqchi’ Maya whom we work with have had minimum schooling, and the literacy level is low and few have a good command of Spanish. We were told that only one person from this community has entered university. Out of the small number of Maya who advance to higher education, very few choose archaeology as a career, partly because of the limited economic opportunities that the field offers.