Nearly a hundred skeletons buried in a cave in southeast Utah offer grisly evidence that ancient Americans waged war on each other as much as 2,000 years ago, according to new research.

Dozens of bodies, dating from the first century CE, bear clear signs of hand-to-hand combat: skulls crushed as if by cudgels; limbs broken at the time of death; and, most damning, weapons still lodged in the back, breast and pelvic bones of some victims — including stone points, bone awls, and knives made of obsidian glass. 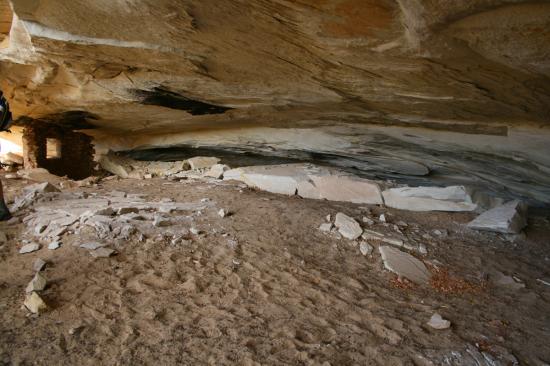 Cave 7 in southeastern Utah as it appears today

Signs of violence were evident in 58 of the approximately 90 bodies found in the cave. Most of the victims were men, but at least 16 women were also found among the dead, as well as nearly 20 children, some as young as three months old.

Since the discovery of this prehistoric charnel house — known to archaeologists as Cave 7 — more than a hundred years ago, there has been little doubt about the violence visited upon those interred there.

But anthropologists continue to debate what that violence meant — specifically, whether Cave 7 was simply a burial ground for casualties of individual conflicts and small skirmishes over centuries, or whether it was more like a war cemetery, where victims were put to rest after a single, catastrophic conflict between cultures.

The site was first excavated in 1893 by Richard Wetherill — the self-taught archaeologist who also led digs at Mesa Verde and Chaco Canyon — and it was a historic discovery in many regards. Judging by the artifacts and other clues found around them, the mutilated bodies were the first evidence of a new people: a pre-ceramic culture that predated the Ancestral Pueblo. From the handiwork they left behind, Wetherill called them “Basket People,” later to be known as Basketmakers, a culture that thrived in the Southwest from about 500 BCE until 750 CE or later.

But the significance of this find was almost overshadowed by the circumstances surrounding the Basketmakers’ deaths. The carnage found in Cave 7 could only be explained, Wetherill concluded, by the “sudden and violent destruction of a community by battle or massacre.”

And this interpretation held for more than a century, until 2012, when radiocarbon dating of some of the bones from the cave showed that the burials actually spanned many centuries — from the first century CE to the early 300s — suggesting that the dead represented several, smaller conflicts over time.

Now, a new analysis of the Cave 7 remains finds that, while the dates do cover a range, the victims of violence in particular appear to date from the same period, intimating that they’re evidence of a “single-event mass killing.”

In a recent study, published in the Journal of Archaeological Science, Dr. Phil Geib of the University of New Mexico and Utah archaeologist Winston Hurst obtained new radiocarbon dates for some of the remains, but they also relied heavily on a traditional standard of archaeology: context.

Drawing on Wetherill’s original field notes, as well as photographs and other documentation, they determined the positions of the bodies within layers of sediment, and also in relation to each other, to assess which were buried together.

In doing this, they identified four sets of remains that were clearly buried in tandem — each from slightly  different parts of the cave, some bearing obvious signs of violence, others not — to serve as samples for the new radiocarbon dating. 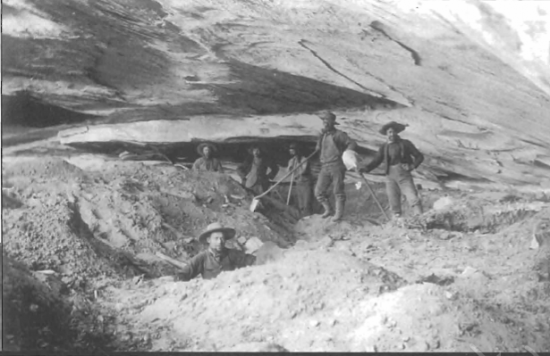 The first group consisted of eight adult men, their bodies flexed and their faces turned toward the mouth of the cave, all but one of whom exhibited signs of what the scientists call “extreme cranial trauma.”

The second featured the body of a young woman with three children positioned on her breast, ranging in age from one to three years, none of which showed any skeletal damage.

The third included seven skeletons seemingly stacked in a haphazard pile, four of them males that had clearly suffered yet more “cephalic brutalization.”

The fourth burial was that of four adult women, one of whom may have been injured at the time of death, and another young child.

Analysis of collagen, a protein, extracted from 11 bone samples among these four groups showed that three of the groups dated to around the same time — from about 1,915 to 1,950 years ago, within the dating process’s margins of error.

Only the remains in the second group, the undamaged female skeleton with the three children, were slightly more recent, dating to about 1,880 years ago.