Ancient travel A huge treasure trove of artefacts including thousands of fragments of pottery provides the first evidence that the sea-faring Lapita people settled in mainland Papua New Guinea.

The discovery, by a group of archaeologists from Australia and Papua New Guinea led by Dr Bruno David and Professor Ian McNiven from Monash University, may also give clues about the origin of Torres Strait Islanders.

The groups' findings are to be presented this weekend at the Australian Archaeological Association Conference in Toowoomba.

The Lapita culture developed on islands off the east coast of Papua New Guinea around 3500 years ago. Approximately three hundred years later the Lapita people started heading east to become the first humans to settle the Solomon Islands, Vanuatu and Fiji, moving later to Samoa and Tonga.

Evidence of their settlement is found in the remains of intricately patterned pottery used for rituals.

But while fragments of the pottery had been found on mainland Papua New Guinea, archaeologists believed the Lapita people never settled in this area.

"We thought that these were an island people only, there was no evidence of these people going onto the PNG mainland at all until we had our findings near Port Moresby," says McNiven.

Between 2009 and 2010 McNiven's teams of archaeologists and local community members excavated several sites at Caution Bay, north-west of Port Moresby.

"When we dug deeper down between 1 and 2 metres below the surface we found evidence of Lapita people and lots of it," says McNiven.

This suggests the Lapita community was very well established, not just passing traders, he says. 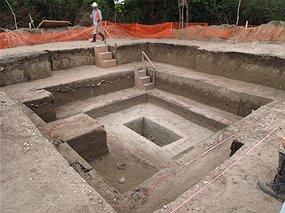 The excavations also revealed a wealth of implements — stone tools, cutting tools and stone axes made out of volcanic rock — as well as Lapita pottery fragments. The largest site, known as Bogi 1, contained thousands of fragments of pottery.

Also included in the find were scraping tools made of rare obsidian found on West Fergusson Island, 500 kilometres to the east.

"So suddenly everything changed. These weren't just people moving out into the Pacific moving further and further east. We now know they came underneath the bottom part of Papua New Guinea and settled on the mainland," says McNiven.

"This is a whole new chapter of Pacific history that nobody knew about."

McNiven says extensive radiocarbon dating on the site indicates the material is between 2500 and 2900 years old.

And while some archaeologists still hold doubts about the find, McNiven says the designs are identical to those found elsewhere in the Pacific.

Professor Glenn Summerhayes from the University of Otago is an expert in Lapita archaeology.

Summerhayes, who was not involved in the project, says some of the pottery is definitely Lapita.

"The pottery we're looking at is a later form of Lapita. [Early Lapita] is quite intricate ... over time the pottery becomes a bit more simplified," explains Summerhayes.

"Not all of [the pottery found] looks like new Lapita, but some of it does, which suggests to me that we are witnessing another expansion along the south coast that we had not imagined."

"This is either tradeware coming in, or probably more likely part of the Austronesian push."

McNiven says the discovery could be linked to an earlier find of 2500 year-old pottery in the Torres Strait Islands.

"At that time [2003] the earliest pottery on the southern coast of PNG was only 2000 years so everyone said 'No, no you must be wrong. You can't have 2500 year old pottery in the Torres Strait Islands'."

"But now we've found this Lapita pottery on the south coast which is more than 2000 years old. So bingo!

McNiven believes the Lapita people come are coming around the southern part of PNG, they're setting up near Port Morseby and … eventually their descendents may have moved into the Torres Strait.

"I think this may be … telling us who Torres Strait Islanders are."

Summerhayes says more data is needed to confirm this link.

"I'm not going to say one way or another because to be quite honest I haven't got a clue anymore. The fact that they've found Lapita pottery west of Port Moresby after years of top rate archaeologists have been working in that region … just tells me how much we don't know about the past."