Cause of the big plague epidemic of Middle Ages identified

Cause of the big plague epidemic of Middle Ages identified 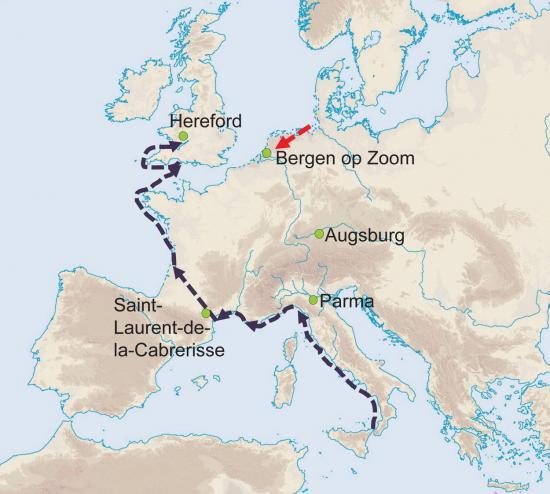 The 'Black Death' was caused by at least two previously unknown types of Yersinia pestis bacteria.

The latest tests conducted by anthropologists at the Johannes Gutenberg University Mainz (JGU) have proven that the bacteria Yersinia pestis was indeed the causative agent behind the "Black Death" that raged across Europe in the Middle Ages. The cause of the epidemic has always remained highly controversial and other pathogens were often named as possible causes, in particular for the northern European regions. Using DNA and protein analyses from skeletons of plague victims, an international team led by the scientists from Mainz has now conclusively shown that Yersinia pestis was responsible for the Black Death in the 14th century and the subsequent epidemics that continued to erupt throughout the European continent for the next 400 years. The tests conducted on genetic material from mass graves in five countries also identified at least two previously unknown types of Yersinia pestis that occurred as pathogens.

"Our findings indicate that the plague traveled to Europe over at least two channels, which then went their own individual ways," explains Dr. Barbara Bramanti from the Institute of Anthropology of Mainz University. The works, published in the open access journal PLoS Pathogens, now provide the necessary basis for conducting a detailed historical reconstruction of how this illness spread.

For a number of years, Barbara Bramanti has been researching major epidemics that were rampant throughout Europe and their possible selective consequences as part of a project funded by the German Research Foundation (DFG). For the recently published work, 76 human skeletons were examined from suspected mass graves for plague victims in England, France, Germany, Italy, and the Netherlands. While other infections such as leprosy can be easily identified long after death by the deformed bones, the problem faced in the search for plague victims lies in the fact that the illness can lead to death within just a few days and leaves no visible traces. With luck, DNA of the pathogen may still be present for many years in the dental pulp or traces of proteins in the bones. Even then it is difficult to detect, and may be distorted through possible contamination. The team led by Bramanti found their results by analyzing old genetic material, also known as ancient DNA (aDNA): Ten specimens from France, England, and the Netherlands showed a Yersinia pestis-specific gene. Because the samples from Parma, Italy and Augsburg, Germany gave no results, they were subjected to another method known as immunochromatography (similar to the method used in home pregnancy tests for example), this time with success.

Once the infection with Yersinia pestis had been conclusively proven, Stephanie Hänsch and Barbara Bramanti used an analysis of around 20 markers to test if one of the known bacteria types "orientalis" or "medievalis" was present. But neither of these two types was found. Instead, two unknown forms were identified, which are older and differ from the modern pathogens found in Africa, America, the Middle East, and the former Soviet Union regions. One of these two types, which are thought to have contributed significantly to the catastrophic course of the plague in the 14th century, most probably no longer exists today. The other appears to have similarities with types that were recently isolated in Asia.

In their reconstruction, Hänsch and Bramanti show an infection path that runs from the initial transportation of the pathogen from Asia to Marseille in November 1347, through western France to northern France and over to England. Because a different type of Yersinia pestis was found in Bergen op Zoom in the Netherlands, the two scientists believe that the South of the Netherlands was not directly infected from England or France, but rather from the North. This would indicate another infection route, which ran from Norway via Friesland and down to the Netherlands. Further investigations are required to uncover the complete route of the epidemic. "The history of this pandemic," stated Hänsch, "is much more complicated than we had previously thought."