Vessels discovered in a Scythian grave mound contained traces of opium and marijuana, confirming the claim of an ancient historian. 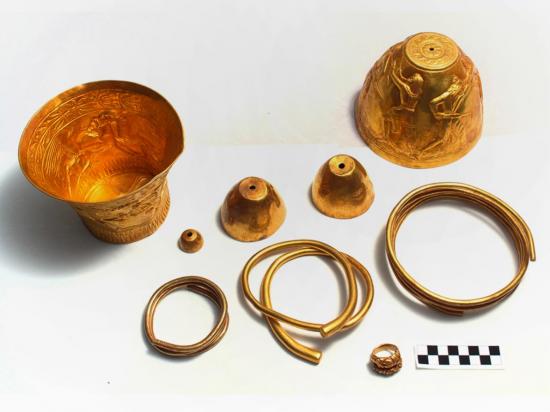 They ruled the vast grasslands of Eurasia for a thousand years, striking fear into the hearts of the ancient Greeks and Persians. But they left no cities or settlements behind, only massive grave mounds, called kurgans, dotting the steppes from Mongolia to the Black Sea.

Now one of those kurgans, located in the Caucasus Mountains of southern Russia, has yielded an intriguing discovery: golden artifacts that are shedding light on the shadowy world of the Scythians, fierce nomads whose exploits—and drug-fueled rituals—were chronicled by the Greek historian Herodotus.

"It's a once-in-a-century discovery," says Anton Gass, an archaeologist at the Prussian Cultural Heritage Foundation in Berlin. "These are among the finest objects we know from the region."

The find—kept secret until now to protect it from looters—first came to light in the summer of 2013, when Stavropol-based archaeologist Andrei Belinski began excavating the kurgan, called Sengileevskoe-2, to clear the way for a power-line project.

A black residue inside the vessels came back positive for opium and cannabis.

At first Belinski wasn't optimistic about finding much inside, as there were telltale signs that the kurgan had been plundered in the past. But a few weeks into the excavation, his team came across a thick layer of clay. Digging underneath, they discovered a rectangular chamber lined with broad, flat stones. Inside was something the looters somehow had missed: golden treasures placed there 2,400 years ago.

"It was definitely a surprise for us," Belinski says. "We weren't expecting to find anything like this." 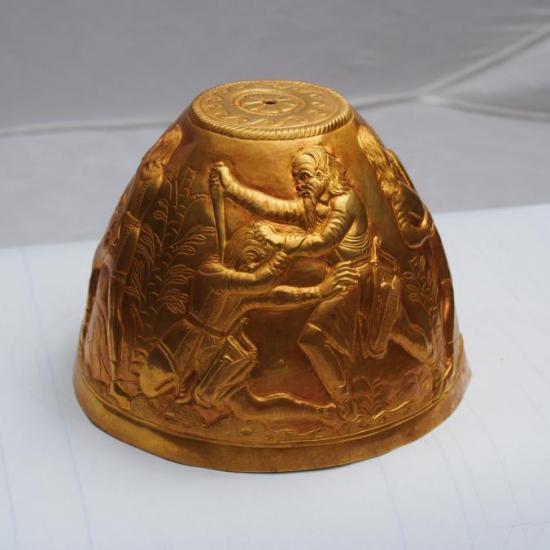 An enraged husband slays the son of an unfaithful wife, according to one interpretation of this scene on an exquisitely detailed Scythian vessel. PHOTOGRAPH BY ANDREI BELINSKY

Belinski asked criminologists in nearby Stavropol to analyze a black residue inside the vessels. The results came back positive for opium and cannabis, confirming a practice first reported by Herodotus. The Greek historian claimed that the Scythians used a plant to produce smoke "that no Grecian vapour-bath can surpass … transported by the vapor, [they] shout aloud."

Because the sticky residue was found on the inside of the vessels, Belinski and Gass think they were used to brew and drink a strong opium concoction, while cannabis was burning nearby. "That both drugs were being used simultaneously is beyond doubt," Gass says.

Once the residue and dirt were cleaned off, the decoration on the gold vessels shone through. One vessel shows an old, bearded man slaying young warriors. The other is covered in mythological creatures: Griffons rip apart a horse and a stag in a bleak landscape that Belinski thinks represents the Scythian underworld.

To archaeologists, the information contained in the images on the gold is exciting. From the warriors’ shoes to their haircuts, the depictions are amazingly lifelike. "I've never seen such a detailed representation of the clothing and weaponry of the Scythians," says Belinski. "It's so detailed you can see how the clothing was sewn."

Gass thinks the scene of the old man slaying the young warriors could be a reference to the "Bastard Wars" reported by Herodotus, who wrote that Scythians spent 28 years on the warpath against neighboring Persia. When they finally returned home, the marauders found intruders in their tents—the bastard children of the Scythians' lonely wives and their slaves. Perhaps the slaughter that ensued was deemed important enough to commemorate in solid gold.

Belinski, however, thinks the representation is more metaphorical, perhaps representing a power struggle after the death of a Scythian king or ruler. "When a king died, there was chaos," he says. "The spirit world was upset by the death of the king, and order had to be born anew."

The central mound was fully excavated last fall. Though no other artifacts were found, Gass and Belinski uncovered a network of trenches and earthen rings around the mound that may have been part of a larger ceremonial complex.

Political tension in the region has put the project on hold, but researchers hope to head into the field again soon. "It's like a detective investigation. We don't understand it all, not immediately," says Gass. "We need to keep digging."