Ancient 'service station' unearthed beside the A1

Mesolithic settlement was unearthed near Catterick in North Yorkshire

Many people may feel that they have spent a great deal of time on the A1 road, which connects London and Edinburgh. But the route has been in use for a staggering 10,000 years, according to newly-discovered archaeological evidence. A Mesolithic settlement, which has been compared to a modern-day service station, has been unearthed by researchers alongside the A1 near Catterick in North Yorkshire.

The route, which is now the A1 between London and Edinburgh, may have been in use for a staggering 10,000 years, newly-discovered archaeological evidence suggests. Experts have discovered ancient artefacts during the widening of the road through North Yorkshire (pictured)

This means the route predates previous estimates that claimed it was built by the Romans. The site is believed to have been a kind of overnight shelter, used by people travelling north and south thousands of years ago. A number of flint tools dating back to between 6000 and 8000 BC were also discovered at the site.

Steve Sherlock, Archaeological Clark for the project, said: ‘This was a place that these people knew of - a place they could return to on many occasions, to stay sheltered overnight during their travels."It is telling us there is evidence for people using the route and moving through the area over periods of time.It is also adding to our knowledge of the early Mesolithic period, a time we don't know very much about and this is very interesting. 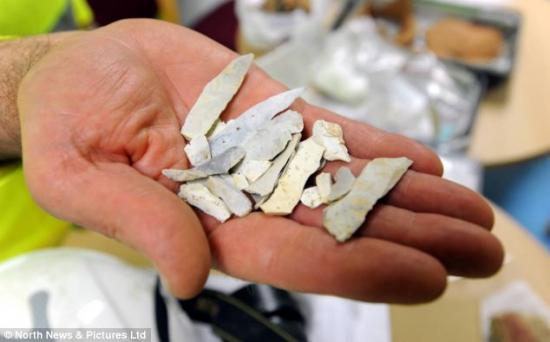 A number of flint tools (pictured) dating back to between 6000 and 8000 BC were also discovered at the site, which is believed to have been a kind of overnight shelter by people travelling north and south centuries 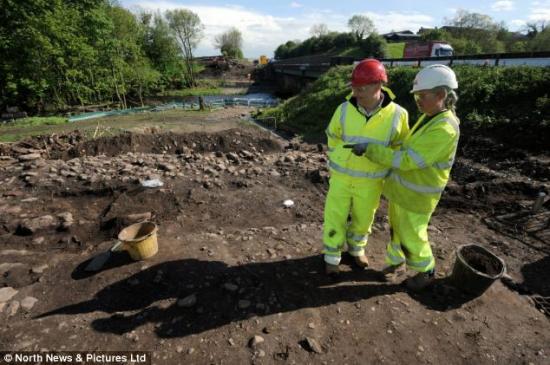 A Mesolithic settlement (pictured), which has been compared to a modern-day service station, has been unearthed by researchers alongside the A1. Evidence of Iron Age, Mesolithic and Neolithic settlements have previously been found near the Roman town of Cataractonium, near the River Swale not far from this location

‘We found a small structure which resembled a type of shelter where they were making the flint tools that were also present at the site.’This rare find was uncovered during the excavation of known Roman settlements in advance of plans to upgrade the A1 to motorway status between Junctions 51 and 56. Neil Redfearn, principal inspector of ancient monuments for English Heritage in North Yorkshire, said: 'I think this is really tantalising. This discovery gives us an even greater understanding of the time depth and movement through this landscape. Can we ask questions about route ways that predate the Roman period?’ he asked. The A1 is the longest numbered road in the country and is under an almost constant state of upgrade.  Archaeologists have been excavating ancient monuments between Leeming and Barton, where construction work will begin to widen the road. 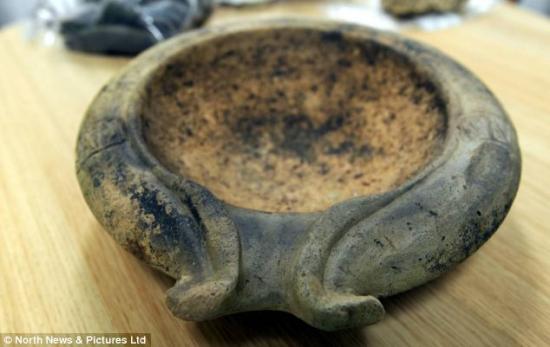 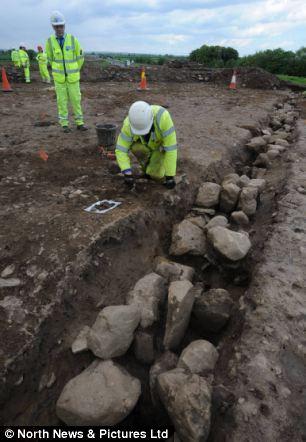 Archaeologists were surprised to find the ancient 'service station'  which provided shelter for travellers heading north and south 10,000 years ago. 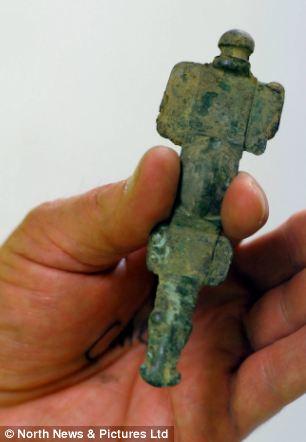 A Saxon brooch was also unearthed at the site. Archaeologists are busy trying to find treasures before the widening of the A1 goes ahead