History has a way of getting plowed, or buried, or worse - bulldozed.

That's true in York County, where the Catawba Indians have lived for centuries. There's no telling what historical treasures have been lost to make way for development, archaeologists say.

But on the banks of the Catawba River - on land destined for the site of a new county museum - lie the remnants of two 18th-century Catawba Indian villages, unearthed while the land was being prepared for development. 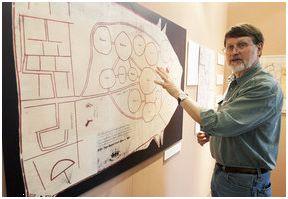 Steve Davis, associate director of Research Laboratories of Archaeology at the University of North Carolina, discusses a reproduction of a 1721 map, originally drawn on a deerskin.

Now, more than 50,000 artifacts - from large pottery pieces to tiny shards - excavated from the villages are helping archaeologists at the University of North Carolina at Chapel Hill weave a more complete narrative of who the Catawbas were and how their culture underwent abrupt transformations as a result of trade, war and a devastating epidemic.

The sites near Interstate 77 and Sutton Road are the historic Catawba towns of Nassaw and Weyapee, said Steve Davis and Brett Riggs, research archaeologists from UNC's research laboratories of archaeology.

The sites are extremely valuable, especially since only a handful existed at the same time as Nassaw and Weyapee, and few remain, Riggs said.

While archaeologists have found evidence of most of the sites, some sites have weathered time, erosion and other forces better than others.

"At this point, we can say at least 50 percent of this record is gone," he said. "It's a very finite resource."

Last fall, the artifacts were displayed at UNC's Wilson Library as part of "Unearthing Native History," an exhibit tracing the development of the Catawba Nation through historical accounts and artifacts excavated by UNC researchers at sites including Nassaw and Weyapee.

In summer 2007 and 2008, Davis and Riggs led a team of UNC archaeologists in excavating the two villages in Fort Mill, bordered by the Catawba River, I-77 and Sutton Road.

The foundation set out to build an environmentally-focused community on a portion of the 400 acres, hoping the sale of real estate would pay for a new county museum on the river.

Early surveys of the land revealed archaeological and environmental features. That's when Davis, Riggs and their field school came and worked on the sites.

Artifacts they found include pottery, ceramic, metal fragments, gun parts, tools and beads. The artifacts are housed at UNC's research laboratories of archaeology under Davis' and Riggs' supervision.

Museum leaders say they planned to preserve important archaeological and historical features in green space as the development moved forward.

Plans to build eventually were put on hold when the economy soured.

In a short time, various ethnic divisions among the Catawbas coalesced, forming what has evolved into the present Catawba Indian Nation.

Following the historic record and determining the manufacturing date of English pipe stems unearthed in the towns, the researchers believe the two communities occupied the area in the 1750s and stayed no later than 1759.

That year, Indian warriors returned from the French and Indian War - and brought with them smallpox, an epidemic that claimed the lives of at least half the Catawbas in the region.

Survivors of the war and disease from each of the towns merged and briefly re-established near present-day Camden.

The pottery and artifacts unearthed at the Nassaw site include English wares they accumulated while fighting in the war and many tools and pottery they made themselves, each telling a different story.

"An abundance of gun parts proved their importance as soldiers," Riggs said. At that time, "the colonies were pouring goods and firearms" into the villages.

Also prevalent were fragments of brass kettles - the envy of any Catawba homemaker, Riggs said.

The Catawba reused smaller pieces of the brass to make jewelry, arrow points and other objects.

Fragments of gun parts including rifle barrels, English ceramic, pipes, and glass wine and rum bottles showed the close contact the Catawbas had with the English.

Even the blade of a Scottish dagger shows the international reach of trade, Riggs and Davis said.

The Catawba pottery made in Nassaw and Weyapee reflects a major cultural shift, Davis and Riggs said.

Most notable is the stark contrast between the pottery they made in the 1750s in Nassaw and the pottery made just a few years later, after epidemic and economic necessity drove them and other groups together.

The sudden - not gradual - break from tradition shows how adaptable and skilled the Catawba potters were and how attuned they were to the market.

This later pottery, often referred to as "colonowares," was traded far and wide for years to come and serves as the basis of the pottery the Catawba still make.

"They were familiar with this material. They already had it," Riggs said. Imitating it was easy. 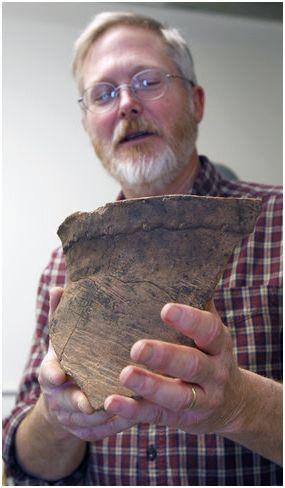 Brett Riggs, research archaeologist with the Research Laboratories of Archaeology at the University of North Carolina at Chapel Hill, holds a piece of a Catawba Indian pot from the 1750s found at the site of Nassaw Town on the Catawba River.

Artifacts are only objects when separated from the land, Davis said. Looking at the organization of the village, the way homes were built and how the village was organized shows how the inhabitants lived.

The Catawbas traditionally buried their dead inside the village, Riggs and Davis have found while excavating other Catawba sites.

Then came smallpox, wiping out at least half the population.

"Their villages were cemeteries," Davis said.

With half deceased and another quarter sick, about all the healthy could do was care for the ill, Riggs said. With so many dying, the Catawba might have buried their dead outside the village as well, he said.

Confirming that suspicion, Riggs and Davis found graves located a distance from the village site.

It's likely that more archaeological research would reveal more burials near the villages, providing insight into how many died and how the living dealt with the epidemic, Riggs said.

Davis, Riggs and their field school researchers excavated only a small fraction of Nassaw and Weyapee, illustrating the land's potential for more exploration.

A complete excavation of the villages - and elsewhere on the property - would reveal more artifacts, buried pit features and burials, they said.

"The work at Nassaw gives us a much broader understanding of what was going on in that world than we could get from any single site," Riggs said.

"Nobody today can say they know everything about their ethnic past," said Winonah Haire, the tribe's historic preservation officer.

Whenever new sites are discovered, they "add to the base of knowledge we have about our ancestors, and there's an act of discovery, information you may not have known," she said.

Ideally, the sites would remain protected and available for research later, Riggs said. Only when threatened by development would he recommend complete excavation.