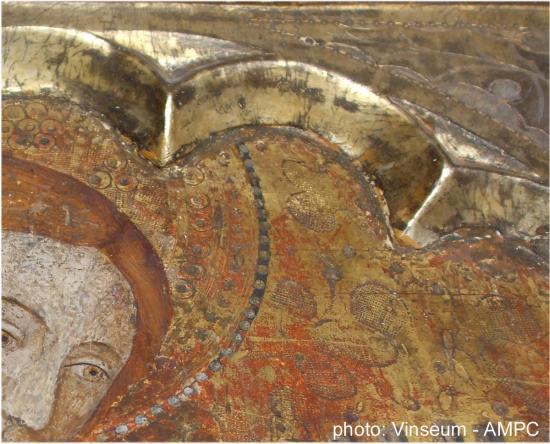 An example of degradation shown in the detail of the ‘La Mare de Déu’ altarpiece dated 1459 from the Vinseum Museum of Vilafranca del Penedčs (Catalonia). ©Vinseum Museum. Credit: AMPC.

Scientists from the Technical University of Catalonia in Barcelona have teamed up with Diamond Light Source to use a brilliant infrared microbeam to understand at the microscopic scale molecular processes affecting the decay or preservation of polychrome carved wood adorning churches and altarpieces depicting saints.

Celebrated on 23rd April each year, St George is not only the patron saint of England, but also the autonomous region of Catalonia and many other countries. His image, and those of other saints, adorns a number of medieval altarpieces in Catalonia around Europe. But many of these sacred artifacts are badly damaged due to the corrosive effects of air on organic-based glues or varnish that hold or cover the thin silver or gold foils used for the Saints’ aureola – the radiant cloud that surrounds the depicted sacred person.

The results of the group’s work published in the journal Analytical and Bioanalytical Chemistry demonstrate that, under different atmospheric conditions, various geographic areas and different climates, the microscopic alteration compounds formed on precious metal lustres are due to atmospheric corrosion but mainly depend on the state of conservation of the organic protective coating.

Dr. Nati Salvado, from the Technical University of Catalonia and lead researcher on the project, explains: “The conservation state of the silver foil is found to be directly related to the silver-atmosphere contact extent. When protected by a paint layer or a well-preserved resin coating, the silver foil can be found in a good conservation state. On the contrary, if the protective layer appears partly or fully absent leaving the silver surface, either directly or through the cracks, exposed to the atmosphere, the silver alteration products are all that is left.”

Microscopic samples of silver decorations from various 15th Century artworks in different states of conservation were examined at Diamond.  These include the valuable altarpieces of St George, St Lucia, St Joan and others, some on display in major collections such as the Museu Nacional d’art de Catalunya in Barcelona.

Dr. Salvado said: “We are studying different artworks from the period of the old Crown of Aragon in order to determine the similarities and differences in the painting technique between painters and their relations with other painters in Europe. It is a very interesting historical period because it corresponds to the transition from Gothic to Renaissance style and technique. The artworks were preserved in various geographic areas with different climates, and the corrosion products enable us to assess the effect of the environmental conditions on the corrosion of silver foils.”