Human remains discovered beneath the floors of mud-brick houses at one of the world's first permanent settlements, were not biologically related to one another, a finding that paints a new picture of life 9,000 years ago on a marshy plain in central Turkey.

Even children as young as 8 were not buried alongside their parents or other relatives at the site called Çatalhöyük, the researchers found.

"It speaks a lot to the type of social structure that they might have had," study researcher Marin Pilloud, a physical anthropologist with the United States military at Joint Accounting Command, in Hawaii, told LiveScience.

Çatalhöyük covered 26 acres (10.5 hectares), and its people — estimated to be as many as 10,000 — would have made a living by growing crops and herding domesticated animals. It was built on a marshy plain in central Turkey.

Before Çatalhöyük, most people on the planet made their living as hunter-gatherers, moving around the landscape in order to survive. In the period after Çatalhöyük was founded, more agricultural settlements were created in the Middle East, paving the way for large cities and the birth of the first civilizations. 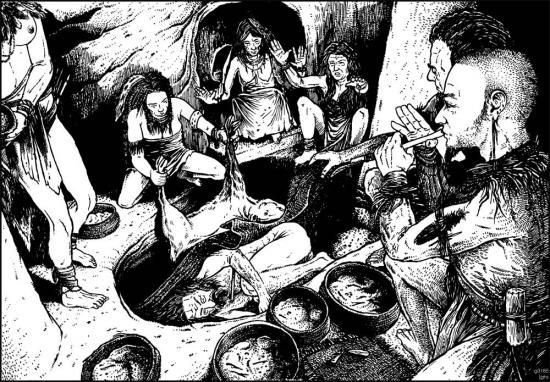 A reconstruction of how a burial may have happened at Çatalhöyük. CREDIT: Çatalhöyük Research Project

When archaeologists first dug up the site in the 1950s and '60s, they found that the settlement contained no streets. Its plastered mud-brick houses were bunched up against each other, and the inhabitants entered them by way of a ladder on the roof. Inside the homes, the people drew art on the walls and created spear points and pottery.

They also buried their dead (up to 30 of them per house) beneath the floors.

To figure out how the buried humans were related, scientists tried — unsuccessfully, due to the advanced age and contamination — to extract DNA from the skeletons.

So Pilloud and Clark Spencer Larsen of Ohio State University analyzed the next best thing: the size and shape of their teeth. Since people who are related should have similarities in tooth morphology, the researchers compared the ancient dental remains of 266 individuals from the site. Their results are detailed in a paper recently published in the American Journal of Physical Anthropology.

They found that the people buried beneath the floor of each house were, in general, not related to each other. With the possible exception of one building, this occurred throughout the entire site for as long as the settlement existed. 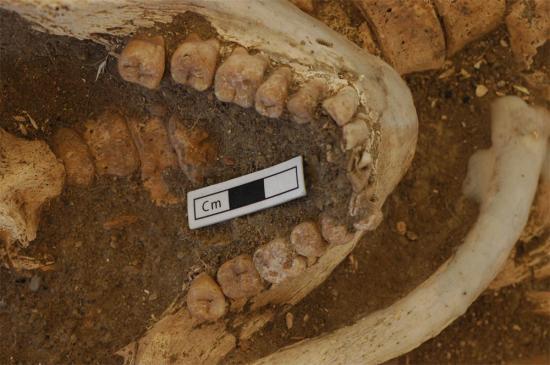 The researchers used dental remains from 266 individuals to determine how they were related, with an example of a human jaw found at the site shown here.
CREDIT: Çatalhöyük Research Project

"It doesn't look as if there was a strong genetic component to determining who would be buried together," Pilloud said. The discovery suggests people living at Çatalhöyük were not tied to each other through strong bonds of kinship, she added.

"I'm not trying to argue that biological relationships would not have been perhaps meaningful to the people at Çatalhöyük," Pilloud said. But rather, biological kinship "wasn't the sole defining principle much like we presume it was in the hunter-gatherer era."

Professor Ian Hodder of Stanford University, who directs current excavations and research efforts at Çatalhöyük, told LiveScience that the results offer a new perspective on what life was like at the ancient settlement.

"It's really quite exciting. Normally archaeologists have to just infer what the biological relationships might be; it opens up a whole new world," said Hodder, who was not directly involved in this study. "In some ways the results are counter-intuitive; they're not really what we expected."

The results support one idea scientists have put forth: that Çatalhöyük society was determined by membership in houses in which a group of people passed down rights and resources, Hodder said.

"Membership of the house was not based on biological kin but on a wide range of processes by which people could join the house," he explained.

Each house may have had access to its own tools, hunting grounds, water sources and agricultural lands. The organization of each house at Çatalhöyük may have in fact encompassed several actual homes at the site.

"What distinguishes each entity is their co-ownership of a series of resources," Hodder said.

The change from biological to more practically based bonds may have been the result of the Çatalhöyük people's move to adopt an urban lifestyle, based on agriculture. That could have altered their view of family relationships.

"Before you were hunters and gatherers, in loose groups that were very highly mobile. Now you're all tied together, and you're all living in close quarters," Pilloud said. "They might have called on other groups of individuals, outside of their biological family, to do things like take the herd to the pasture or to help with the harvest, things that might have required more people."

Hodder said this discovery suggests Çatalhöyük was a more complex society than has been thought.

"I think that as society becomes more sedentary and complex that kinship itself doesn't seem to be sufficient to hold it together," he said. "This is suggesting that they've got [a] sufficiently complex level that they needed something more complex than kinship."