Archaeologists in Italy have discovered a mummified foetus from the 19th century that is thought to have undergone a destructive operation while it was still inside its mother’s womb.

It appears the procedure to break up the foetus was carried out after its death, when the mother’s life was in danger- and the remains were then carefully wrapped up.

The mummy is the only case of the surgical practice - which was popular in ancient times - in the central region of Italy, researchers claim. 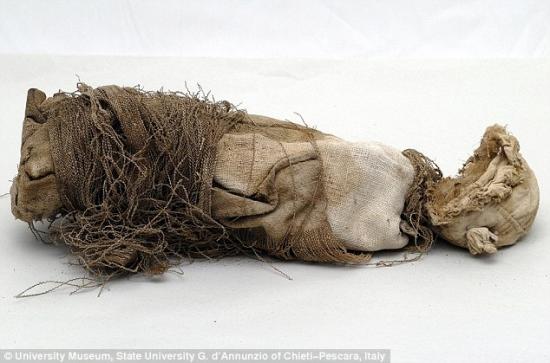 The gruesome find came to light after an earthquake struck L’Aquila, Italy, in 2009, Live Science reported.

The 6.3 magnitude disaster killed 300 people as well as damaging buildings including the St. John the Evangelist church in the village of Casentino.

It was beneath this church that the mummified bodies, including the foetus, were found in underground rooms.

Researchers estimate that the foetus was laid to rest in 1840. They X-rayed the remains to discover that the skeleton was not connected properly, so some of the bones had been moved around. The X-ray is pictured

Researchers estimate the foetus was laid to rest in 1840.

They X-rayed the remains to discover that the skeleton was not connected properly, highlighting that some of the bones had been moved around.

Experts could not establish the sex of the foetus because the pelvic and jaw bones were damaged, but they think it was 29 weeks into development when it perished.

They think the procedure took place because the skull had been dissected in places, and separated from the spine.

And the arms were found to be broken at the joints, according to the study, published in the International Journal of Osteoarcheology.

These characteristics ‘strongly suggest a case of embryotomy,’ according to Ruggero D'Anastasio of University Museum at University of Chieti, Italy. 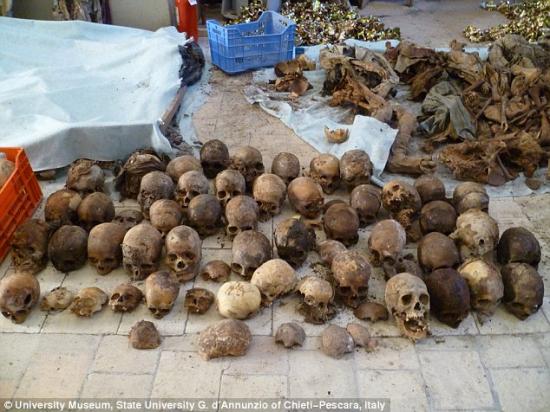 Other mummified remains (pictured) discovered at the site have undergone radiocarbon dating and are thought to date back to the 19th century or earlier. Some have lesions from autopsy procedures

Embryotomy is the dismemberment of a foetus in the womb in order to make a delivery possible by natural means.

Dr D'Anastasio said that such a procedure was common in Alexandria and Rome in the 1st and 2nd centuries.

It was used to remove a foetus from the womb that had already died, or to preserve a mother’s life if she was threatened by delivery complications.

Some experts claim that embryotomy was used as an extreme method of abortion in medieval times, but was not thought to be common less than 200 years ago.

The remains of the foetus were reassembled into its natural shape, with pieces of skull placed carefully inside a carefully-made cloth.

Unlike the brutal procedure, the dressing of the remains suggests compassion for unborn children at the time.

Other mummified remains discovered at the site have undergone radiocarbon dating and are thought to date back to the 19th century or earlier.

Some of the bodies had lesions from autopsy procedures, showing doctors at the time removed bone from the skull in order to access the brain.