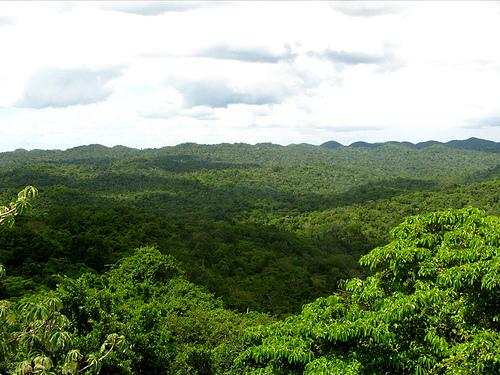 A study supported by a NASA grant through the Space Archaeology program and the University of Central Florida, University of Florida, Space Research Initiative, has released its findings on research conducted in Belizean forests, comparing previous satellite data to recently acquired data using laser technology.

“Addressing the problem of deforestation/forest degradation is critical as, during the 2009-11 archaeological field seasons (January-March), the sounds of chainsaws were heard almost daily by researchers working near the epicenter which is located H”6 km from the border,” the researchers said. “Researchers repeatedly stumbled upon small cleared areas, some with planks remaining and evidence of horse paths that were used to transport the lumber .”

The deforestation findings are detailed in a recently released study captioned, “Use of airborne LiDAR to delineate canopy degradation and encroachment along the Guatemala-Belize border”, published in Tropical Conservation Science: Vol. 5, No 1 (2012), and authored by John F. Weishampel and Jessica N. Hightower of the Department of Biology at the University of Central Florida, along with Arlen F. Chase and Diane Z. Chase of the Department of Anthropology of UCF.

The report said that focus areas were analyzed in the Caracol Archaeological Reserve (CAR), located next to the Chiquibil National Park (CNP) and Chiquibil Forest Reserve (CFR), and adjacent to the Guatemalan border.

“Unfortunately, as we are learning more about the archaeological remains at Caracol with LiDAR, this same technology is also detailing extensive modern deforestation and looting along the Guatemala-Belize border that is encroaching several kilometers into the archaeological reserve and threatening the preservation of Belize’s cultural and natural heritage,” Weishampel et al documented.

“Most of the deforestation over the last 30 years occurred during the last decade (2000-2010),” they also note, and “most of the deforested areas continued to be used for agriculture or pastureland, and hence forests were not permitted to regenerate.”

The researchers note that, “Tropical rainforest clearing and degradation significantly reduces carbon sequestration and increases the rate of biodiversity loss. There has been a concerted international effort to develop remote sensing techniques to monitor broad-scale patterns of forest canopy disturbance.”

They compared satellite-derived measures of canopy disturbance that occurred over a three-decade period since 1980 to those derived from a 2009 airborne LiDAR campaign over the Caracol Archaeological Reserve in western Belize, and found that where they were able to overlap the data, they showed more than a 58% increase in the extent of canopy disturbance.

“For the entire archaeological reserve, with the addition of LiDAR, there was a 2.5% increase of degraded canopy than estimated with Landsat alone, indicating that 11.3% of the reserve has been subjected to illegal selective logging and deforestation,” the researchers added.

They go on to say that, “Incursions into the reserve from the Guatemala border, represented by LiDAR-detected canopy disturbance, extended 1 km deeper (to 3.5 km) into Belize than were derived with Landsat.

“Thus, while LiDAR enables a synoptic, never-seen-before, below-canopy view of the Maya city of Caracol, it also reveals the degree of canopy disturbance and potential looting of areas yet to be documented by archaeologists on the ground.”