More than five centuries after Christopher Columbus’s flagship, the Santa Maria, was wrecked in the Caribbean, archaeological investigators think they may have discovered the vessel’s long-lost remains – lying at the bottom of the sea off the north coast of Haiti. It’s likely to be one of the world’s most important underwater archaeological discoveries.

“All the geographical, underwater topography and archaeological evidence strongly suggests that this wreck is Columbus’ famous flagship, the Santa Maria,” said the leader of a recent reconnaissance expedition to the site, one of America’s top underwater archaeological investigators, Barry Clifford.

“The Haitian government has been extremely helpful – and we now need to continue working  with them to carry out a detailed archaeological excavation of the wreck,” he said.

So far, Mr Clifford’s team has carried out purely non-invasive survey work at the site – measuring and photographing it.

Tentatively identifying the wreck as the Santa Maria has been made possible by quite separate discoveries made by other archaeologists in 2003 suggesting the probable location of Columbus’ fort relatively nearby. Armed with this new information about the location of the fort, Clifford was able to use data in  Christopher Columbus’ diary to work out where the wreck should be.

An expedition, mounted by his team a decade ago, had already found and photographed the wreck – but had not, at that stage, realized its probable identity.

It’s a current re-examination of underwater photographs from that initial survey (carried out back in 2003), combined with data from recent reconnaissance dives on the site (carried out by Clifford’s team earlier this month), that have allowed Clifford to tentatively identify the wreck as that of the Santa Maria.

The evidence so far is substantial. It is the right location in terms of how Christopher Columbus, writing in his diary, described the wreck in relation to his fort.

The site is also an exact match in terms of historical knowledge about the underwater topography associated with the loss of the Santa Maria. The local currents are  also consistent with what is known historically about the way the vessel drifted immediately prior to its demise.

The footprint of the wreck, represented by the pile of ship’s ballast, is also exactly what one would expect from a vessel the size of theSanta Maria.

Using marine magnetometers, side-scan sonar equipment and divers, Mr. Clifford’s team has, over several years, investigated more than 400 seabed anomalies off the north coast of Haiti and has narrowed the search for the Santa Maria down to the tiny area where the wreck, which the team thinks may well be Columbus’ lost vessel, has been found.

A re-examination of the photographic evidence taken during the 2003 initial survey of the site by Mr. Clifford and his son Brandon has also provided evidence which is consistent with the vessel being from Columbus’ era - including a probable early cannon of exactly the type  known to have been on-board the Santa Maria.

When Clifford and his team returned to the site earlier this month, their intention was to definitively identify the cannon and other surface artefacts that had been photographed back in 2003. But tragically all the key visible diagnostic objects including the cannon had been looted by illicit raiders.

“We’ve informed the Haitian government of our discovery – and we are looking forward to working with them and other Haitian colleagues to ensure that the site is fully protected and preserved. It will be a wonderful opportunity to work with the Haitian authorities to preserve the evidence and artefacts of the ship that changed the world,” said Mr. Clifford.

“I am confident that a full excavation of the wreck will yield the first ever detailed marine archaeological evidence of Columbus’ discovery of America.”

“Ideally, if excavations go well and depending on the state of preservation of any buried timber, it may ultimately be possible to lift any surviving remains of the vessel, fully conserve them and then put them on permanent public exhibition in a museum in Haiti.

“I believe that, treated in this way, the wreck has the potential to play a major role in helping to further develop Haiti’s tourism industry in the future,” he said.

Mr Clifford, who discussed the wreck site with the President of Haiti, Michel Martelly last year, is one of the world’s most experienced explorers of underwater archaeological sites. He has carried out survey work on dozens of historic wrecks in different parts of the world over the past four decades –  and was the discoverer and excavator of the world’s first fully verified pirate shipwreck, the Whydah, back in 1984,  and more recently discovered Captain Kidd’s flagship off Madagascar.

The Santa Maria was built at some stage in the second half of the 15 century in northern Spain’s Basque Country. In 1492, Columbus hired the ship and sailed in it from southern Spain’s Atlantic coast via the Canary Islands in search of a new western route to Asia.

After 37 days, Columbus reached the Bahamas – but, just over ten weeks later, his flagship, the Santa Maria, with Columbus on board, drifted at night onto a reef off the northern coast of Haiti and had to be abandoned. Then, in a native village nearby, Columbus began building his first fort – and,  a week later, leaving many of his men behind in the fort, he used  his two remaining vessels to sail back to Spain in order to report his discovery of what he perceived as a new westerly route to Asia  to his royal patrons  - King Ferdinand and Queen Isabella of Spain. 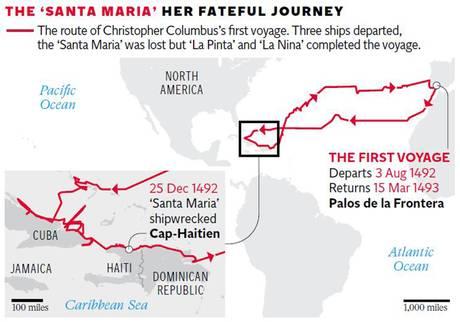 A leading American maritime archaeologist, Professor Charles Beeker of Indiana University, who accompanied Mr Clifford’s recent reconnaissance expedition to Haiti and who also carried out an underwater visual assessment of the site, says that it “warrants a detailed scientific investigation to obtain diagnostic artefacts”.

“There is some very compelling evidence  from the 2003 photographs of the site and from the recent reconnaissance dives that this wreck may well be the Santa Maria,”

“But an excavation  will be necessary in order to find more evidence and confirm that,” said Professor Beeker who is Director of the University of Indiana’s Office of Underwater Science.

The investigation into the wreck is being supported by the American TV network, the History channel, which has secured the exclusive rights to produce a major television programme on the subject.

A hand-drawn map by Christopher Columbus shows the northern coast of Española (Hispaniola), where his flagship, the Santa Maria, sank in 1492.