In a century most of Canada’s important arctic archaeological sites will be damaged beyond repair, impacted by erosion, permafrost thawing, and rising sea levels brought on by climate change. Some will be gone completely—and archaeologists have been racing against the clock to save as much information about these unique sites as they can.

Historically, northern Canada is underlain with permanently frozen soil for ten or 11 months of the year with only the active layer—the top 10 to 20 centimetres—thawing out during the summer. This frozen soil can stretch for hundreds of metres below the Earth’s surface.

“For us archaeologists it’s incredible because organic artifacts tended to be perfectly preserved and in a lot cases they’ve literally been frozen since the sites were abandoned, until we dig them up,” said Dr. Max Friesen, ​a professor and arctic archeologist at the University of Toronto. “Most of my colleagues working almost anywhere else in the world don’t have a hope of getting this kind of stuff.”

But with global climates heating up, the Arctic’s active layer extends deeper every summer, and one of the largest contributing factors to the destruction of arctic sites is thawing permafrost. This great thaw is leaving organic artifacts to rot—or, in some cases, wash into the ocean—forcing arctic archaeologists to survey and excavate the most important sites before they’re gone.

Dr. Friesen’s team is in the middle of a multi-year excavation in the ​Mackenzie Delta on the western coast of the Northwest Territories. It is the fastest sinking arctic coastline in Canada and home to some of the most important Inuit archaeological sites in the country—some dating back to the 1200s, Dr. Friesen said. 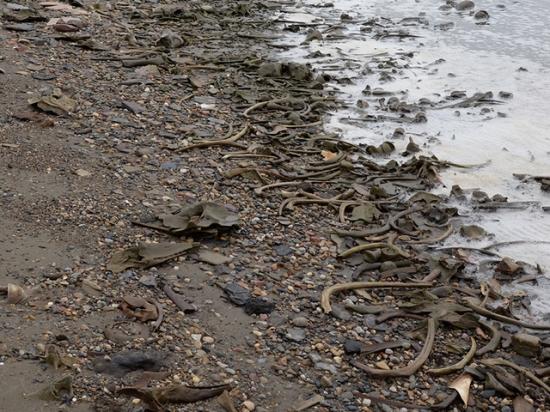 The beach at Kuukpak covered in beluga whale bones that have eroded from sod houses. Image: Max Friesen

One of the team’s excavation sites, what was once the village of Kuukpak, is a classic area for large scale beluga whale hunting in historic Inuit culture. The site is in an ecotone—an area where multiple ecozones overlap—making it an incredibly rich environment with over 50 species of mammals as well as numerous fish and bird species. Such generous conditions made Kuukpak home to some of the largest Inuit villages ever to have existed.

“This site had probably about 500 people, compared to an average [site] of about 150, this site is really a massive site by Northern standards,” Dr. Friesen said.

Along with a wealth of artifacts, like animal bones and hunting tools, Dr. Friesen’s team excavated the first fully uncovered sod house, a traditional Inuit lodging that would have housed between 15 to 30 people in the 1400s.

“There are a lot of categories of information you can get [from these artifacts] the two bigs ones are the diet, hunting patterns and economy on one hand and on the other hand its information about the technology and social organizations of historic Inuvialuit,” Dr. Friesen said adding that all artifacts recovered from the site are automatically property of the government of the Northwest Territories.

But Kuukpak won’t last long. Like so many other rich arctic archaeological sites it is being destroyed by erosion at an alarming rate.

“In some areas the coast is actually moving back five metres a year, so in a decade that’s 50 metres,” Dr. Friesen explained. “And when you think of an average early Inuvialuit site that might be 100 metres by 30 metres, that means you can lose an entire site in a decade.” 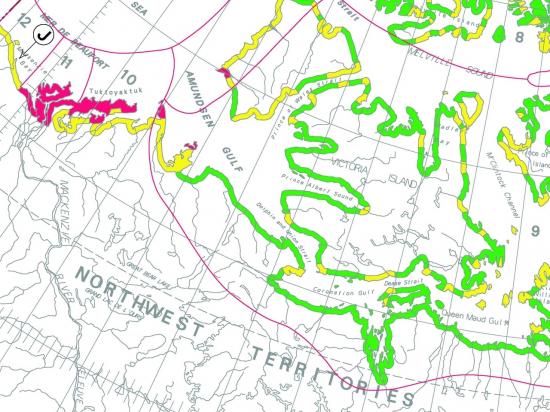 Mackenzie Bay is in the very top-left corner of the map. Look for the letter "J." Image: ​Natural Resources Canada

Worse, the sod houses—the largest artifacts in the Mackenzie Delta—cannot be preserved for future generations; transporting something of such a size would be overwhelmingly costly, and a logistical nightmare for the team.

“The idea is to get the best digitally mapped version [of the house] as we can and preserve the information, but not the house itself,” Dr. Friesen said. The team hopes to make their 3D scan accessible to the public for future generations.

But while archaeologists are struggling to preserve Arctic history, modern towns are eroding just as rapidly as archaeological sites. The hamlet of Tuktoyaktuk, with a population of close to 900 people, is on a sinking peninsula and local governments are trying to figure out how long they have before they have to start moving buildings.

“There are areas in [Tuktoyaktuk] where in a big storm the water is more or less coming up to the houses. So you can imagine that if a government has ‘x’ amount of money to deal with climate change impact—they have to start with that kind of stuff,” Dr. Friesen said.

Given the imminent danger to modern towns, projects that aim to save arctic archaeological sites will have to continue to fight for funding. While there has yet to be a large scale projection of permafrost thawing done for the Northwest Territories, there has been one done for Alaska, where it’s expected that mostly every site in the state will have thawed out by the year 2100.

Dr. Friesen pointed out that many of the sites that are being affected by climate change are extremely significant, and “one of a kind in the Inuvialuit world.”

“It’s horrible,” he told me. “There are huge sites in the North of Alaska that are as bad as these ones or worse. In the Siberian Arctic its the same thing.”

Dr. Friesen and his team are hoping to continue to excavating around the Mackenzie Delta into 2018.

“I’m hoping that when the project is over there will at least be this limited amount of stuff that will have been saved that wouldn't have been saved otherwise,” Dr. Friesen said.