Can DNA evidence fill gaps in our history books?

If you go back far enough, all people share a common ancestry. But some populations are more closely related than others based on events in the past that brought them together. Now, researchers* reporting in the Cell Press journal Current Biology on September 17 have shown that it's possible to use DNA evidence as a means to reconstruct and date those significant past events. The findings suggest that evidence in our genomes can help to recover lost bits of history.

"We now have the statistical machinery to uncover which historical events have produced the mosaic genomes of people in Europe today," says George Busby of the University of Oxford. "The successful reconstruction of the genetic history of a region of the world that has been well investigated both archaeologically and historically suggests that these approaches have the potential to be applied to areas where history has not been so well recorded and where genetics might be the only way of recovering history."

Busby and his colleagues applied a new method they've developed to compare single genetic variants among populations, taking into account the relationships among those markers based on their physical proximity along the chromosomes. That information can be used to infer subtle relationships among populations, including those that are genetically very similar, as well as the history of a continent.

The new work shows that all European populations have mixed over time as people picked up and moved from one place to another. Usually this mixing has involved nearby groups, but sometimes populations bear the mark of invading populations from more distant locations.

"Much as different cultures have often borrowed elements from each other, we are now seeing that the genomes of people alive in Europe today contain ancestry from multiple different places, from within Europe and outside," says Cristian Capelli, the study's senior author.

The results offer interesting insights into human history, including the lives of "regular people."

"History is often written by the winners and the elites—we often do not hear about the everyday life of people," Busby says. "By studying the DNA of populations and understanding how different groups are ancestrally related to each other, our analysis tells the story of all people."

For example, the researchers found evidence of contact across Central Asia with groups from Mongolia. In fact, they see evidence that Mongolians migrated into Europe in two waves: once at a time that matches the known expansions of Genghis Khan and the other occurring much earlier, prior to 1000 CE in groups of North East Europe, including the Chuvash, Russians, and Mordovians.

The researchers also see evidence of mixing among Europeans in the Mediterranean and people from West and North Africa at many times and places over the course of history. The Slavic expansion also left its mark on European genomes, showing that this was a key event in the genetic history of the region.

The researchers say it's now "clear that migration and admixture have been the norm, rather than the exception, throughout human history." 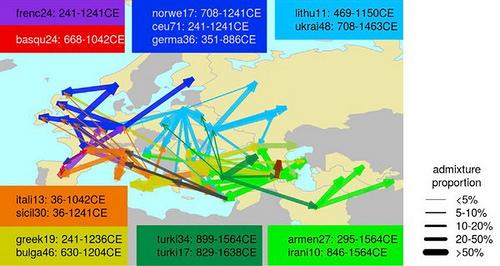 Gene flow within West Eurasia is shown by lines linking the best-matching donor group to the sources of admixture with recipient clusters (arrowhead). Line colors represent the regional identity of the donor group, and line thickness represents the proportion of DNA coming from the donor group. Ranges of the dates (point estimates) for events involving sources most similar to selected donor groups are shown.  Credit:  Busby et al./Current Biology 2015

This research was supported by the University of Oxford, the Wellcome Trust, the Royal Society, the Biotechnology and Biological Sciences Research Council, and the British Academy. Co-author James Wilson is a shareholder, employee, and director of the commercial genetic ancestry testing company ScotlandsDNA.