Can Abecedaries Be Used to Date the Book of Psalms?

Using Letter Order in the Ancient Hebrew Alphabet for Clues 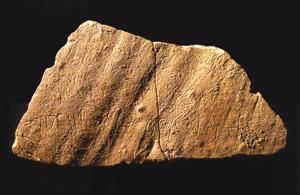 The Izbet Sartah Abecedary (12th century B.C.E.), which reads left to right, reverses the ordinary order of the letters ayin (o) and pe(p). This and other ancient abecedaries shed light on the date of some of the Book of Psalms.

Hebrew language scholar Robert Alter once called the dating of individual psalms “a region of treacherous scholarly quicksand.” While many of the 150 psalms that make up the Book of Psalms include superscriptions attributing them to “David” or other individuals, these should not be taken as reflections of authorship, but rather that the psalms were dedicated to that person or connected to their life. In the July/August 2012 issue of Biblical Archaeology Review, Mitchell First escapes the chronological quicksand with a unique approach – he compares ancient abecedaries to the Book of Psalms for a new perspective on letter order in the ancient Hebrew alphabet.
An abecedary (or abecedarium) is an inscription of the alphabet without any additional text. In the recent BAR article “What’s the Oldest Hebrew Inscription?,” [link] Christopher Rollston investigates two abecedaries (or abecedaria) –the Izebet Sartah abecedary and the Tel Zayit abecedary – as contenders for the distinction. Mitchell First compares the letter order on these abecedaries to the Book of Psalms in his article, “Can Archaeology Help Date the Psalms?” 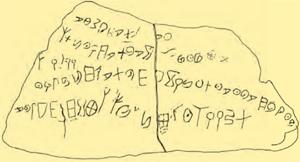 The Book of Psalms is traditionally divided into five books. There is a scholarly consensus that the first three books are the earlier collections, with the first as the earliest and the fifth, which refers to the Babylonian exile, as the final. Many of the psalms are written as acrostics, with successive verses beginning with successive letters of the alphabet. Yet the letter order of the acrostics in the Book of Psalms is not consistent. Is this a textual error, or is it a chronological cue pointing to developments in the ancient Hebrew alphabet?
Alphabets generally follow a set order; a comes before b, aleph comes before beth, etc. In the middle of the Hebrew alphabet, ayin comes before pe.” In the 12th-10th century B.C.E. Izbet Sartah and Tel Zayit abecedaries, the order of these letters is reversed—the pe comes before the ayin.
The acrostics of the first Book of Psalms repeat the ancient Hebrew alphabet four times, at Psalms 9-10, 25, 34 and 37. Mitchell First makes some interesting discoveries about the order of the Psalms:

First supports his conclusions with a discussion of an additional text from Kuntillet ‘Ajrud and extends his study of letter order to the fifth book of Psalms in “Can Archaeology Help Date the Psalms?” Read it in the BAS Library as it appears in the July/August Biblical Archaeology Review.