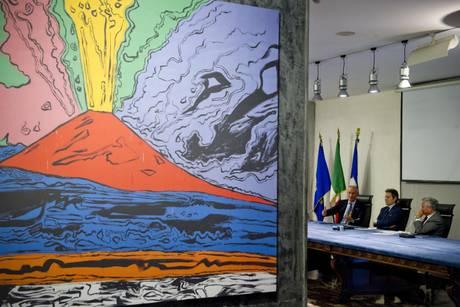 Some researchers are suggesting that Neanderthals were driven to extinction by a massive volcanic eruption near Naples.

The suggestion is one of the topics under debate this week at a conference at London's British Museum examining what forces led to the destruction of the Neanderthals and what led to the triumph of the homo sapiens.

One new theory holds that a gigantic eruption of the volcano in the Campi Flegrei area near Naples 39,000 years ago was catastrophic for the Neanderthals.

That was the biggest volcanic eruption in Europe for more than 200,000 years and scientists say that its enormous plumes of ash would have blotted out the sun for months, or possibly years.

And that, in turn, would have caused temperatures to plummet and filled the atmosphere with toxic matter that may have contributed to the end of the Neanderthals.

But not all scientists agree.

Some argue the Neanderthals were already extinct before the eruption.

This is just one of the major issues at the conference called: "When Europe was covered by ice and ash". At the meeting scientists will also try to understand why homo sapiens are the only species left today and why other version of humanity died out.