Calvert Island (Canada): Footprints found may be oldest on continent 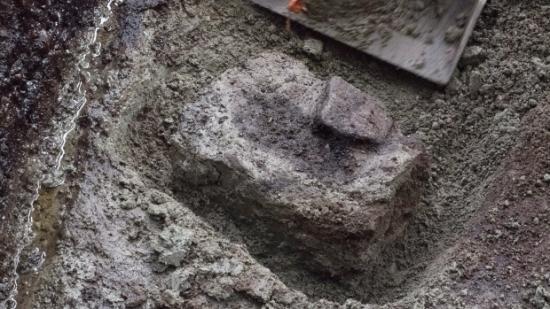 A section of soil where the impressions of human footprints buried at a shoreline archaeological site were discovered by researchers on Calvert Island, B.C. (Joanne McSporran / THE CANADIAN PRESS)

Evidence of what could be the oldest family camping trip in North America has been discovered below the shoreline of a remote British Columbia island.

Fossilized human footprints believed to be of a man, woman and child and estimated to be more than 13,000 years old were discovered at Calvert Island, which is located on B.C.’s central coast and is accessible only by boat or float plane.

Remnants of an ancient campfire were found nearby.

Archeologist Duncan McLaren said radiocarbon dating indicates the charcoal materials are 13,200 years old, and he is preparing to duplicate those tests to confirm the results.

“We’re very excited about it,” he said.

Sites in Washington, Oregon and Alaska also confirm human activity more than 14,000 years ago but they do not have fossilized footprints, said McLaren.

“We figure that at some point people were hanging out around this fire,” he said. “They left their footprints in the grey clay and then they were subsequently filled by this black sand, which essentially preserved the footprints.”

The footprints’ sizes indicate they were made by a large adult, likely a man, a smaller adult, believed to be a woman, and a child whose feet would fit a present-day child’s size-seven shoe.

McLaren said the footprints illustrate how long people have lived along B.C.’s coast. He said the Calvert Island footprints are 800 years older than human footprints discovered on nearby Haida Gwaii.

“It shows that this place we inhabit has a long history,” said McLaren.

“Often in Canada and North America the history of the land is glossed over as being very recent, but if you look at the archaeology it’s showing there’s a very long-term history of occupation and land use going back 13,000 years.”

McLaren is part of a larger research team drawn from the University of Victoria, Hakai Institute and Heiltsuk and Wuikinuxv First Nations. They discovered the footprints in April 2014 but returned last month to confirm their find.

“It was a lot of physical labour. We had to do preliminary testing, which we did last year, then move to a painstaking excavation with hand tools. The footprints that we found were close to a metre below the surface, so removing the material above that takes some time.”

Sea levels along B.C.’s coast have shifted dramatically over the centuries due to ice ages, but Calvert Island has remained relatively stable, he said.

B.C.’s Lower Mainland and Haida Gwaii have risen and dropped by more than 150 metres, washing out many potential archeological sites, but Calvert Island is the same place it was thousands of years ago, he said.

McLaren said researchers purposely worked close to the Calvert shoreline, believing their digs would hold treasures that were relatively untouched by the forces of nature.

“We haven’t excavated all of these footprint as of yet,” he McLaren. “We’ve only opened up a fairly small area, two-by-two metres. We’re fairly certain that there will be additional footprints as well as the potential for…other features in the same area that we have been working.”

VIDEO = WATCH: Archaeologists from B.C. are showing off a discovery that has amazed the whole world. They’ve found human footprints, thousands of years old, buried beneath the sand on a remote island. As Robin Gill reports, they give a fascinating glimpse into the humans who roamed the continent long ago.