Calixtlahuaca was a large urban center of the Matlatzinco culture, closely related to the Aztecs.

Bioarchaeologists work with the traditional archaeologists to try to understand the way a group of people lived based on the remains they leave behind.  While working on the site of Calixtlahuaca in Mexico, Doctor Michael Smith and his team uncovered four full burials and the areas with broken bone rasps discussed in the previous post, all of which were later analyzed by Kristin Nado. Six burials is a relatively small sample size. While the site provides insight to the lives of a small group of people, archaeologists tend to prefer larger samples to understand trends and diversity among the population. From this smaller sample, bioarchaeologists can observe individuals and how those individuals lived, as will be discussed later, though the broader understanding of the group is limited. 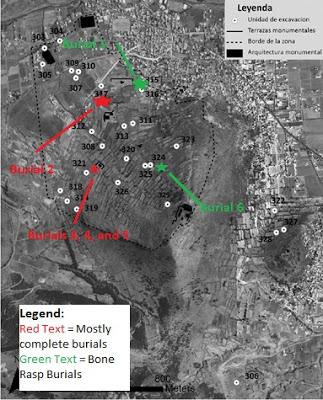 Three burials are physically close together, which may imply some sort of familial relationship between burials 5, 4, and 3 (which contain two adult males and an adult whose sex is unknown).  The two of these three bodies with preserved feet share a congenital condition known as non-osseous tarsal coalitions. This condition is also found in burial 2, which is from a different house excavation.  According to Nado, tarsal coalitions are when two or more tarsal bones are connected by bone or cartilage. This union of bone can be painful, and can also affect the sufferer’s ability to walk.  Further study of the inhabitants of Calixtlahuaca would provide a better understanding this condition in the region. If other remains were uncovered, it would allow bioarchaeologists like Nado to analyze if the condition is regional or possibly only specific to certain groups. DNA evidence of the relationship would strengthen the claim.

Beyond this potential familial relationship, the man in Burial Four has pathologies that are not found in the other burials.

Burial Four is a male, who was between 25 and 29 years old at the time of death. Based on the man’s bones, Nado could immediately identify several pathological problems that give insight into the life of this man.  The tarsal coalitions are present, which would probably have caused pain. The lip of his acetabulum (colloquially known as the hip joint) appears to have extra articular surfaces. Nado has hypothesized that this may be due to a dislocation of the hip earlier in his life that was never realigned.  This would have been extremely painful, if not completely crippling to individual in Burial Four. The injury was sustained long enough before death that the bone had time to repair itself and try to accommodate the new location of Burial Four’s femur. This would have taken years. 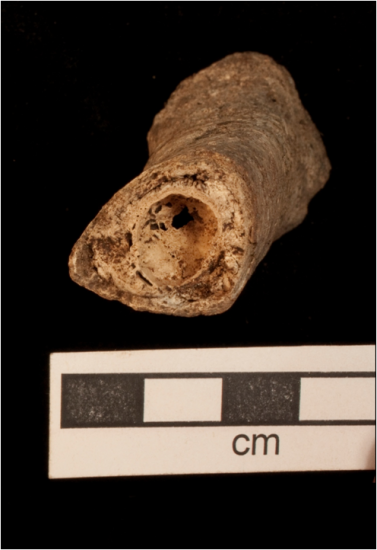 His left tibia is also of interest.  It is unlike any other long bone found on site. Inside normal long bones is the medullary cavity, where the marrow is found. In Burial Four’s tibia, there seems to be a bubble of bone. The bioarchaeologists of SHESC remain puzzled as to what it could be, though it has been suggested that a cyst in the bone ossified, and that this is what remains.

More can be learned from his skeletal remains. The teeth on the left side of his mouth are significantly more worn than those on the right, which Nado has suggested may have been due to use of his teeth for things beyond chewing. Was this for some task he performed because he could not walk?  Only Burial Five had a similar, albeit less prominent, wear pattern, also known as “bilateral asymmetry”. If more mandibles/maxilla can found at the site, more research into the presence of this wear could be performed. Was it specific to a group or family? What caused it? What does this tell us about social organization at the site and the relationship between Burial Four and others of his time?

While not everything that happened in life can be viewed in the skeletal remains of a person, bioarchaeology offers a glimpse into the lives of those long gone.  Thanks to Dr. Michael Smith, Angela Huster, Juliana Novic, Kristin Nado and the Calixtlahuaca team for their efforts to discover more about how people lived long ago.