Cahokia (USA): Largest Earthwork, Monks Mound, May Have Been Built in Only 20 Years 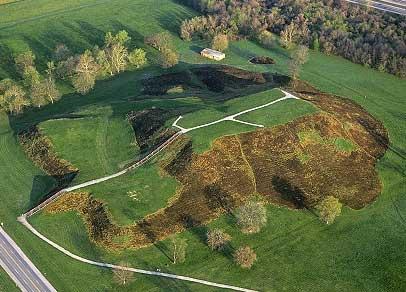 An aerial view of Monks Mound, the largest prehistoric earthwork in North America.

It was ten stories tall, and wider at the base than the Empire State Building. And nearly a thousand years ago, it was the centerpiece of the continent’s largest city north of Mexico.

Today, the search to determine how native engineers built Monk’s Mound — North America’s biggest prehistoric earthen structure — has turned up some new and crucial, but very small, clues: the seeds and spores of ancient plants.

Researchers studying the giant platform mound at the heart of the settlement of Cahokia have studied its internal structure in closer detail than ever. And their new findings suggest that the huge earthwork may have been built surprisingly quickly — perhaps in just a fraction of the time that archaeologists once thought.

“Monks Mound is an incredibly complex bit of earthen architecture,” said Dr. Timothy Schilling, who co-authored the new research as part of his dissertation.

“Whether or not you would call it engineering, the builders were certainly in tune with their materials.

“We documented massive repairs done on the mound, and these were done pretty darn efficiently.”

At its peak from about 1050 to 1100 CE, Cahokia was home to as many as 15,000 people, and Monks Mound was constructed as its symbolic center: a towering, rectangular series of terraces topped with a large public building, perhaps a temple.

Investigations into how the mound was built began in the 1960s, when researchers drilled nine core samples and, based on the layering that they found, surmised that it was constructed in 14 stages, over the course of as much as 250 years.

This seemed plausible enough at the time, considering that the mound was built entirely by hand.

Workers are thought to have loaded baskets at a nearby source of fill dirt, called a borrow pit, and then shaped the dirt and clay into a flat-topped pyramid 30 meters [100 feet] tall — all without wheels, metal tools, or beasts of burden. 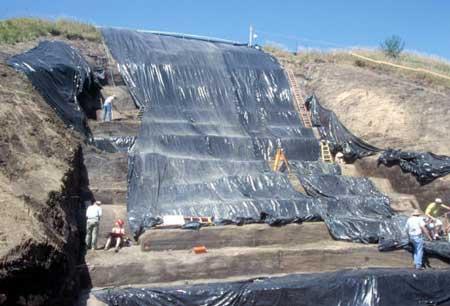 But when the slopes of Monk’s Mound began to collapse in 2005, Schilling and Dr. Neal Lopinot of Missouri State University, who led the new study, took advantage of the repairs being done to collect 22 samples from an exposed face of the mound’s interior.

Their aim was to study the sediments from the surrounding floodplain that were used to build the earthwork.

These samples were filled with tiny plant life that could reveal where the dirt came from, and how long it sat undisturbed before it was moved to the mound.

“We decided to look for plant material, because quite a bit of information can be derived from sediments, particularly about environments,” Schilling said.

“We were hoping to understand the source for the sediments in the mound.”

Using optical and electron microscopes, Lopinot studied the samples and found plant remnants that suggested the soil in Monks Mound had not gone undisturbed for very long.

For one thing, with the exception of plants that were used as food, like elderberry, all of the seeds found were of annual plants — plants that only live for one year — including wetland species such as quillwort and spike rush.

The absence of any perennial plants, which live for two years or more, suggests that the borrow pits used to build the mound were disturbed frequently.

“If there was a substantial time lapse between the use of the borrow pits, we would have a different environmental profile — more well established perennials versus weedy annuals,” Schilling explained.

“Consequently, we think activity in the borrow pits never ceased long enough for perennials to become established. Construction must have been relatively continuous without long interruptions.”

Lopinot, who led the research, agreed.

“Given the great dominance of seeds from annual weeds in the … samples,” he said, “it seems evident that the areas where soils were obtained were much disturbed, probably due to the continuous removal and thereby disturbance of those soils.

“This evidence supports Tim’s argument that Monks Mound was built over a relatively short period of time — that is, a few decades — not intermittently for some 250 years as once believed.”

Moreover, the seeds that were found were all uncarbonized, or unburned; this, too, may suggest that the soil had been quickly turned over, the pair noted.

In places where soil is not disrupted, archaeologists often find burned plant material as a sign of human activity, like from fires or cooked food, they explained.

“Typically, archaeobotanists look for carbonized plant remains at archaeological sites, because there is a greater level of certainty that the remains are associated with human activities — food, wood for fires, et cetera,” Schilling said.

Lopinot added that the unburned remains were well-preserved, suggesting that they had not been exposed on the surface of the borrow pit for long.

“Uncarbonized remains … typically decompose relatively rapidly at open-air sites in non-arid to semi-arid contexts,” Lopinot added, “whereas carbonized remains can remain at such sites for many thousand years.”

In addition to these finds, the researchers discovered another striking aspect of Monks Mound’s construction: Parts of it appear to have been built from whole blocks of sod, rather than basketfuls of soil.

“They are cut sodblocks turned upside down and stacked like bricks,” Lopinot said.

Schilling added, “This is the first time sodblock construction, or repair, has been identified in the mound.”

All of this evidence taken together suggests to the researchers that Monks Mound was built quickly and efficiently.

Rather than taking two centuries or more, they believe, the continent’s largest earthwork was constructed in one-tenth that time.

While cautioning that their research doesn’t provide “absolute ages” for the mound’s construction, Schilling noted that the “data do not contradict a very short chronology.”

The microscopic clues turned up by their research may then lead to a new understanding of one of America’s most impressive prehistoric monuments, Schilling said.

“At first glance, the mound fill sediments look like just dirt, but in reality we’ve added a considerable amount of knowledge to what the local Cahokia environment looked like while the mound was being constructed,” he said.

“In the big scheme of things, it may be a small discovery,” Lopinot added, “but we think it’s one that should receive far more attention in the future, wherever mound excavations are being undertaken by conscientious archaeologists.”

While the construction of Monks Mound may have been much faster than some experts believed, it was still a herculean effort that dwarfed the high-tech emergency repairs that the scientists themselves witnessed in 2005.

“While we probably did the best repair job possible — it seems to be holding up fine nearly 10 years later — the Mississippians were able to fix the mound and make it last for almost 1000 years,” Schilling said.

“So, in short, it took a lot of smarts to build Monks Mound and have it last for as long as it has.”

Lopinot and Schilling report their findings, with colleagues Gayle Fritz and John Kelly of Washington University, in the Midcontinental Journal of Archaeology.