CAHOKIA MOUNDS (USA): the remnants of a sprawling metropolis

Cahokia Mounds & the remnants of a sprawling metropolis 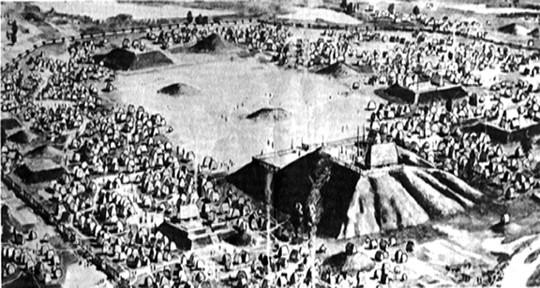 An artist's depiction of Cahokia Mounds at its peak.

Located on an expansive flood plain near the confluence of the Illinois, Mississippi and Missouri rivers is the preserved central section of the largest prehistoric Indian city north of Mexico. As a World Heritage Site, Cahokia Mounds includes 68 hand-packed earthen mounds, a wooden sun calendar, several burial tombs and a central plaza, all spanning across 2,200 acres (880 ha). There are 80 remaining mounds in total, out of 120 known.

Among the most interesting excavations, “Mound 72” produced nearly 300 burials including a 45-year-old male ruler whose body was placed upon 20,000 shell beads. Next to his body were four men with their heads and hands missing, along with the bodies of 53 women between the ages of 15 and 25 who were sacrificed with their ruler. The city at its height in 1200 CE was home to at least 20,000 residents, but may have been as high as 50,000. At that time Cahokia had a larger population than the city of London, England. Expansive agricultural fields encircling the city supported the citizens. Cahokia is also the renowned birthplace of archeoastronomy, the science of identifying astronomical alignments within the architecture of prehistoric structures. Archeoastronomy became a new component of North American archaeology following Warren Wittry’s 1964 discovery of several woodhenges at Cahokia. Wittry demonstrated that these wooden features were solar observatories and determined that its builders had an integral understanding of celestial movements.

The Mississippi River and many of its tributaries once supported an advanced early American civilization that mysteriously disappeared. The Mississippian Culture thrived for 500 years, emerging around 900 CE, seemingly as a direct result of the earlier Adena and Hopewell mound builders of the middle Ohio Valley. The cultures’ lasting legacy is the variety of mound cities to be found along waterways from Wisconsin down to the Gulf of Mexico. Many of these early settlements were developed later as modern cities; for example, St. Louis, Missouri was originally called “Mound City.” The people are known as the “Mississippian Culture” mound builders because no recorded name exists. Similarly, the name “Cahokia” is taken from a sub-tribe of the Illini Indians because no knowledge of the original name exists. Like the Mayans in Central America, this advanced culture went into decline, then all but vanished by the time modern Europeans explored the area. Suggestions as to why Cahokia was abandoned include natural resource depletion, climatic change, war, or social unrest. Most likely an outbreak of smallpox or another lethal disease was unleashed in 1541 by Spanish conquistadors led by Hernando De Soto during their ill-fated search for gold across southeastern North America. De Soto and his men recorded some of the mound cities still under construction and occupied, yet never made it as far north as Cahokia. What actually became of the original Cahokia inhabitants remains a complete mystery. Later tribes lacked the oral traditions or knowledge of the site to link them to any actual builders, yet Cahokia was the largest city of the Mississippian Culture.

Ceremonial activities such as human sacrifice and sun worship took place at Cahokia. Atop the pyramids were astronomical observatories, sometimes burial crypts, and usually ritual buildings where a priest-king would oversee various ceremonies. Monk’s Mound at Cahokia is the largest prehistoric structure in North America. Originally more than four city blocks long, the sacred pyramid had a base slightly larger than Egypt’s Great Pyramid.

At first glance, the layout of prehistoric Cahokia is remarkably similar to the design of Central American sacred cities, carefully arranged in rows of houses surrounding various open plazas. Platform mounds were erected to house leaders in elevated temples and were laid out based on specific solar and other astronomical events. The central precinct facing Monk’s Mound was enclosed by a high stockade wall plastered with hardened clay, effectively making it a giant fortress. Bastions were erected at regular intervals to make defense of the walls easier. Excavations show that the walls were rebuilt at least four times and also uncovered thousands of arrowheads where the walls would have burned under siege.

A wooden sun calendar, named “Woodhenge” by Wittry, was erected to determine the seasons and to schedule ceremonial activities, including where various games were to be played. Cahokia is sometimes referred to as “the City of the Sun” because a “Birdman” tablet was found, similar in appearance to Quetzalcoatl, regarded as the high priest of the city. But perhaps the greatest similarity to prehistoric Central American culture lies within the enormous earthen mounds shaped like pyramids. The largest pyramid at Cahokia was erroneously named Monk’s Mound after French Trappist Monks who lived at the site in the 1800s, much later than any of the mound builder cultures. Monk’s Mound is the single largest prehistoric earthwork in the Americas. This ancient pyramid once had a base of 16 acres (6.4 ha), making it larger than the Great Pyramid in Egypt. The earthen mound once stood 10 stories tall, yet due to soil settlement and erosion it is now only 35 feet (11 m) in height. Important ceremonies were held on two levels of the great mound. At the top, a priest-king lived in a huge wooden temple, dedicated to the sun god.

Recent drilling into Monk’s Mound has revealed an unsuspected find. In January 1998, workers broke a drill bit when they struck a hard surface while probing into the mound. According to archaeologists, the find could be the remnants of a ceremonial structure, a burial tomb, a cache of tools, or some sort of drainage system. The structure was encountered at 40 feet (12 m) under the second terrace, where the drill bit broke after boring through 32 feet (9 m) of stone. What makes this interesting is that the Mississippian Culture is not known to have used stone for their construction, at least not at this site. Further remote sensing at the site found three “anomalies”—the original stone structure, a densely packed earth structure above it, and a second earthen structure was identified 70 feet (21 m) deeper into the center of the mound. These finds may be part of an older structure pre-dating Monk’s Mound. It is common throughout the world for ancient sites to be located on top of older structures or upon their original foundations.