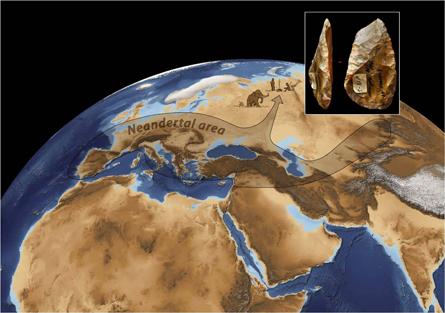 Northern Exposure -  Map shows the location of the more than 30,000-year-old Byzovaya site near the Arctic Circle in northern Russia in relation to Neandertals’ known settlement area. Inset shows a Byzovaya stone tool from two angles.Science/AAAS

Artifacts found in this desolate region imply that the toolmakers adapted to frigid temperatures and dark winters, says a team led by archaeologist Ludovic Slimak of the University of Toulouse, France. Around that time, modern human groups in Europe and southwestern Asia underwent pivotal cultural changes. Some groups even reached Arctic spots near the new finds and left behind artifacts associated with that human cultural transition.

The new Arctic discoveries present a much tougher call. The stone implements -- manufactured between 34,000 and 31,000 years ago at Byzovaya, a site in Russia’s Ural Mountains -- resemble scraping and cutting tools associated with 130,000- to 30,000-year-old European Neandertals, Slimak and his colleagues report in the May 13 Science. To complicate matters, groups of Homo sapiens that lived in northern Africa and southwestern Asia between 200,000 and 45,000 years ago made tools like those of Neandertals.

If Neandertals held court at Byzovaya, then these stocky members of the human evolutionary family lived near groups of H. sapiens that reached the Russian Arctic by 36,000 years ago (SN: 9/22/01, p. 187). If modern humans made the distinctive Byzovaya tools, “it would imply that Arctic H. sapiens groups preserved an older Stone Age culture after the expansion of modern societies in the rest of Eurasia,” Slimak says. 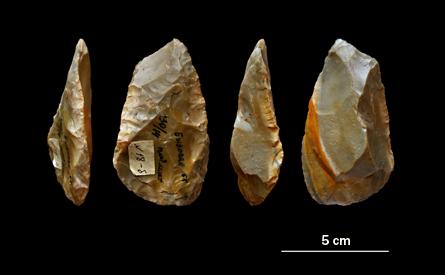 Tough Call -  Stone tools, such as the one shown here from different angles, found at a more than 30,000-year-old site near the Arctic Circle might have been made by Neandertals, ancient people or even a recently proposed Neandertal relative, scientists say.Hugues Plisson, Science/AAAS

Stone tools attributed to anatomically modern human societies, which date to as early as 45,000 years ago in southern Russia, include small, rectangular blades and spear points. Such implements haven’t been found at Byzovaya.

Slimak’s discoveries resemble stone tools used not only by Stone Age people but by some recent hunter-gatherers to kill and butcher game, comments archaeologist John Hoffecker of the University Colorado at Boulder.

Human-made, old-school tools at Byzovaya would support the idea that stone blades and other cultural signatures of modern societies emerged in Europe, where people migrating from Africa competed for resources with native Neandertals, suggests archaeologist John Shea of Stony Brook University in New York.

Slimak and his colleagues studied more than 300 stone artifacts and 4,000 animal bones that have been excavated by their team and another group since 1996. The artifacts include cutting tools and large rocks from which these implements had been removed with pounding stones. Nearly two dozen mammoth, reindeer and brown bear bones display butchery marks.

Age estimates for the Arctic site rest on measurements of carbon decay rates in animal bones from different soil layers and a calculation of the time elapsed since stone artifacts were buried.