Earlier this year a rare Bronze Age founders hoard, buried within a pot in an Essex field, was excavated by archaeologists after being discovered by metal detectorists. The excavation was recorded by 360Production in the  following video.

Laura McLean, Finds Liaison Officer (FLO) for the Portable Antiquities Scheme, explained,  “This is a really exciting find and a good example of metal detectorists and archaeologists working together to uncover and record our history, making sure it is not lost forever”

In late September Laura was contacted by the landowner who had given permission for a metal detectorist to search on his land. He mentioned that a few interesting objects had turned up which might need closer examination. The landowner and the detectorist, Mr Humphreys brought the objects into Colchester and Ipswich Museums to be looked at and reported under the Treasure Act as, what had been uncovered amounted to a Bronze Age hoard.

About a week later, Laura was contacted by three Essex based metal detectorists who also had permission to detect on the same land. Mr Hill, Mr Mann and Mr Starr had recovered Bronze Age material from the same area. However, in the process the three detectorists had discovered part of an in situ pottery vessel which appeared to be associated with the metalwork. Running their detectors over the visible rim of the pot, it was clear to them that there was more metalwork to be retrieved. Knowing that this was undoubtedly in its original undisturbed Bronze Age context, they made the decision to leave it in the ground and proceeded to back fill the hole. They then contacted Laura to report what they had found so that it could be excavated archaeologically. 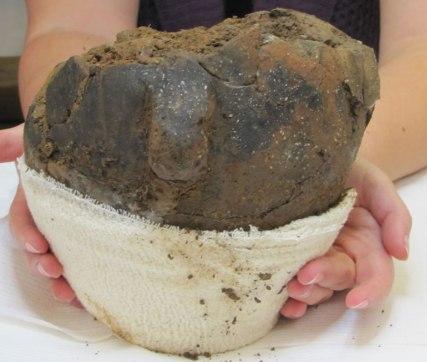 The recovered metal work and ceramic vessel have been undergoing analysis in the lab at the Colchester & Ipswich Museum Resource Centre. The cataloguing of the hoard material is an ongoing process as each piece of metal work has to be assessed and identified. Several of the complete axes contain soil in their sockets, and the contents have to be carefully removed in order to look for any metal work or organic matter that may have been deliberately stuffed into the socket opening. The position of the broken pieces of metalwork contained within the pot may also give an insight into the selection process of  the person who deposited this hoard  in the Bronze Age.  The metal work is currently attributed to the Late Bronze Age Ewart Park metalworking tradition (c. 1000–800 BC). 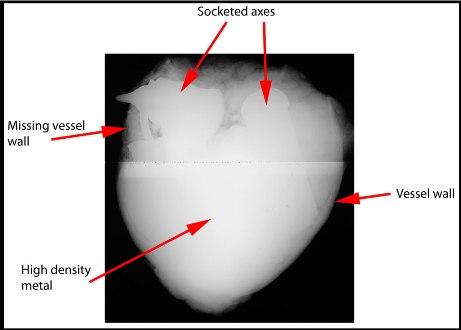 As well as working on the metal work, the block-lifted vessel needed some attention. The pot was x-rayed in its block-lifted condition, an.d from this could be clearly seen the outline of two socketed axes – one appeared to be complete, and the other showed the blade end only. The lower areas of the pot showed up as bright white areas, due to the high density of metalwork contained in the lower section. The x-ray was also important to see the extent of damage to the pot itself. The pot was then unwrapped and examined by Stefanie White (Conservator, Colchester and Ipswich Museums) to assess the pot’s condition particularly in the areas where  damage had already occurred. Looking at the base and walls of the vessel, there were some clear fractures that needed to be addressed before micro-excavation of the contents could begin. 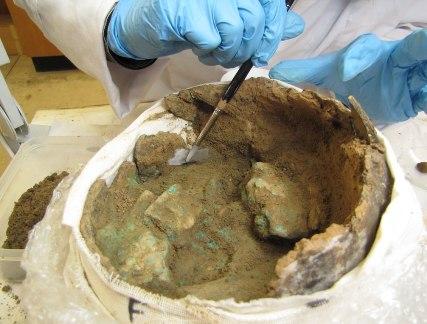 The external surface of the pot was cleaned and consolidated with reversible conservation adhesive. A support consisting of bandages, calico and a polymer was then constructed and wrapped around the base and sides of the vessel to act as a reinforcement,  thus enabling the removal of the metal contents. The soil was removed in layers using the x-ray as a guide, and the position of the metal work was documented. Two complete socketed axes and some fragments were removed, as well as part of an ingot and the tip of a socketed spear. Further soil was removed, and an area of compacted metal work was then uncovered – the area of ‘white’ in the x-ray.   As the objects were so tightly packed in the vessel, the surfaces of the metalwork had corroded and stuck together, making it impossible to remove any further pieces individually.  A new approach to the conservation of the pot and the removal of its contents had to be considered, so the vessel was disassembled along its fracture lines to complete the process. 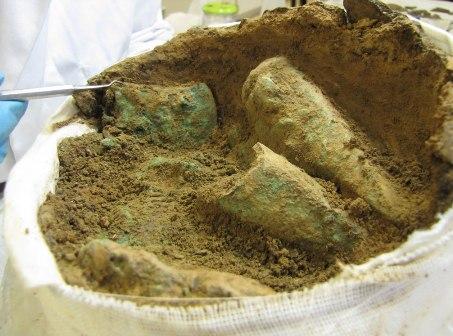 Currently, the material from the hoard including the ceramics are being examined and a report is being compiled to present to the Essex Coroner’s Office in early 2011 – it will be the coroner who can legally declare the hoard to be treasure. 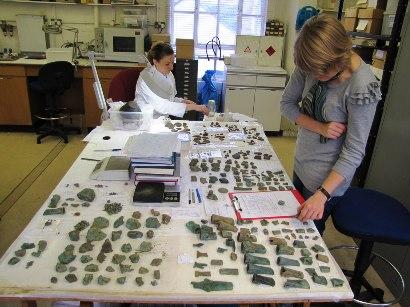 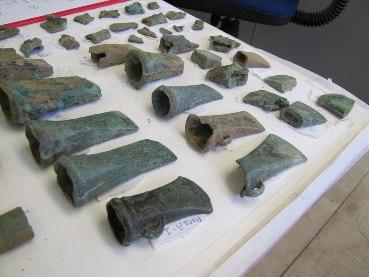