Ancient remains uncovered in Ukraine represent some of the oldest evidence of modern people in Europe, experts have claimed. 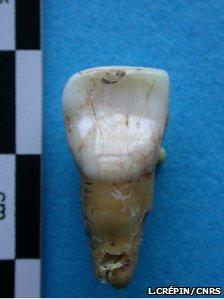 The 32,000-year-old fossils bear cut marks suggesting they were defleshed as part of a post-mortem ritual. 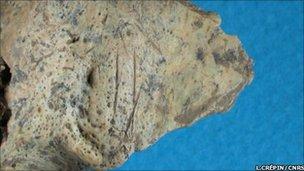 Details have been published in the journal PLoS One.

Archaeologist Dr Alexander Yanevich from the National Ukrainian Academy of Science in Kiev discovered the four Buran-Kaya caves in the Crimean mountains in 1991.

Since then, roughly two hundred human bone fragments have been unearthed at the site.

Among the shards of human bones and teeth, archaeologists have found ornaments fashioned from ivory, along with the abundant remains of animals.

The artefacts made by humans at the site allowed archaeologists to tie the ancient people to a cultural tradition known as the Gravettian.

This culture came to span the entire European continent and is named after the site of La Gravette in France, where this stone age culture was first studied.

Researchers were able to directly date the human fossils using radiocarbon techniques. The shape and form of the remains told the scientists they were dealing with modern humans (Homo sapiens sapiens).

One thing that intrigued researchers was the scarcity of human long bones (bones from the limbs) in the caves.

But the human remains consisted of vertebrae, teeth and skull bones no larger than 12cm.

What is more, the positions of cut marks found on the human fragments were distinct from those found on the animal bones.

And while the bone marrow had been removed from butchered animals, it had been left alone in the case of the human remains at the site, explained co-author Sandrine Prat from the French National Centre for Scientific Research (CNRS) in Paris.

She suspects this demonstrates that human bones were processed differently from those of animals. Human flesh was removed as part of ritual "cleaning", not to be eaten.

The finds offer anthropologists a glimpse into a very early and important human culture, said Professor Clive Finlayson, an evolutionary ecologist and director of the Gibraltar Museum.

"Gravettian culture is the culture that defines modern humans.

"These people had knives, lightweight tools, open air camps, they used mammoth bones to make tents," he said, adding that this was the earliest example of the Gravettian cultural tradition.

Professor Finlayson said that uncovering evidence of this culture in Ukraine gave weight to the idea that early modern people spread into Europe from the Russian plains, not north through the Balkans from the Middle East.

Anatomically Modern Humans (AMHs) are known to have spread across Europe during the period coinciding with the Middle to Upper Paleolithic transition. Whereas their dispersal into Western Europe is relatively well established, evidence of an early settlement of Eastern Europe by modern humans are comparatively scarce.

Based on a multidisciplinary approach for the study of human and faunal remains, we describe here the oldest AMH remains from the extreme southeast Europe, in conjunction with their associated cultural and paleoecological background. We applied taxonomy, paleoecology, and taphonomy combined with geomorphology, stratigraphy, archeology and radiocarbon dating. More than 160 human bone remains have been discovered. They originate from a well documented Upper Paleolithic archeological layer (Gravettian cultural tradition) from the site of Buran-Kaya III located in Crimea (Ukraine). The combination of non-metric dental traits and the morphology of the occipital bones allow us to attribute the human remains to Anatomically Modern Humans. A set of human and faunal remains from this layer has been radiocarbon dated by Accelerator Mass Spectrometry. The direct-dating results of human bone establish a secure presence of AMHs at 31,900+240/−220 BP in this region. They are the oldest direct evidence of the presence of AMHs in a well documented archeological context. Based on taphonomical observations (cut marks and distribution of skeletal elements), they represent the oldest Upper Paleolithic modern humans from Eastern Europe, showing post-mortem treatment of the dead as well.

These findings are essential for the debate on the spread of modern humans in Europe during the Upper Paleolithic, as well as their cultural behaviors.