A University of Missouri archeologist has found a 4,000-year-old statue in Peru that gives new insight into an ancient agricultural society. 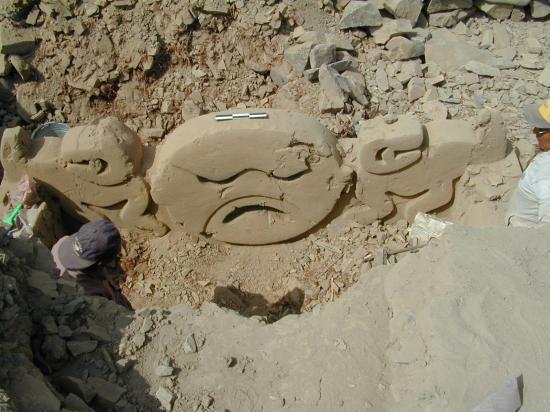 Exposed sculpture of the menacing disk flanked by two mythical foxes. The foxes have lunar eyes that face the December solstice sunset.

Robert Benfer, a professor emeritus of anthropology, said the mud plaster bust – a bust of a figure blowing a trumpet and another mask-like image flanked by foxes – was found at the “Buena Vista” site in the Andes Mountains, about 30 miles north of Lima, Peru. Radiocarbon dating indicates the bust was created around 2,000 B.C, making it the oldest 3-D statue found in the Americas. 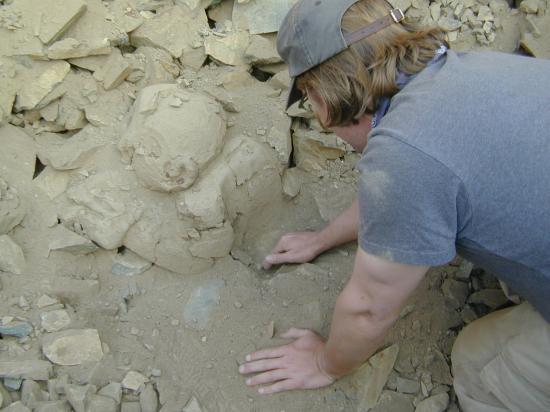 Neil Duncan, an anthropologist from MU, is beginning the excavation of the bust of the musician. The rocks to the left are from a looter’s pit. The figure is seated at one side of a corridor that leads to the temple with the menacing disk and fox sculptures.

“This is really the find of a lifetime,” Benfer said. “This bust helps us better understand this culture. As with many ancient cultures, the Andean people had a great investment in agriculture and some of their myths and legends revolve around growing and gathering food. Even today, the Andean people still tell stories about the fox as they explain the gift of the first cultivated foods. The Andean legend says the fox found a rope that led to heaven where it found an abundance of new foods. When the fox fell from heaven, it split open, providing a variety of new foods for the Andean people.” 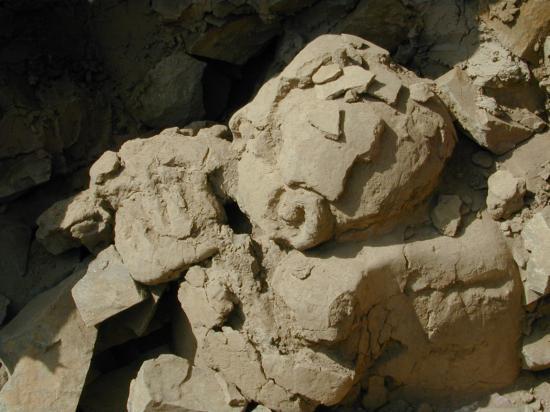 The 4,000 year old bust is fully exposed, although the legs are not visible because they hang over the edge of a wall. The fingers of the hands can be seen on the flute.

The Andeans had their own Zodiac signs, and the constellation of the fox is still associated with the timing of agricultural events such as planting and irrigation, Benfer said. At sites like Buena Vista, ancient astronomer-priests directed the construction of platform pyramids and art in their temples based on astronomical alignments of the sun, moon and other figures in the Andean Zodiac. 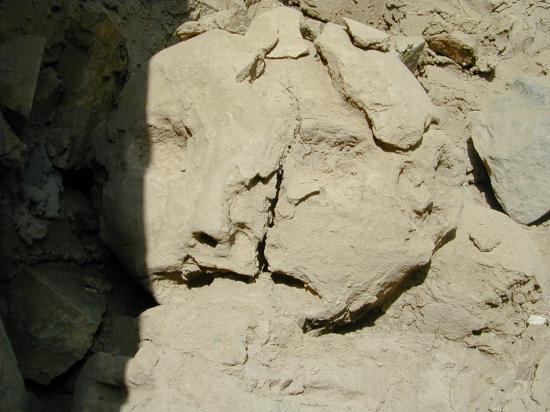 The musical instrument can be seen touching the mouth of the musician. Benfer believes this could be a representation of a Strombus trumpet that was used in Inca times and still today in the Andes.

On the 4,000-year-old statue, it appears that the horn player is announcing the priests when they enter the Temple of the Menacing Disk, a site first discovered by Benfer in 2004. On the left, the female foxes around the menacing disk mask-like central figure face the June solstice sunset with two eyes shaped like the moon, indicating gathering darkness Benfer said. On the right, the male fox has one eye shaped like the sun, looking to the rising sun of the December solstice.

“Anthropologists think that many of our beliefs today stem from ancient beliefs, but only occasionally can these beliefs be confirmed,” Benfer said. “This is one of those times. Myths and symbols are reused and recycled in different ways, but the lessons remain the same.  The Andean people couldn’t read; yet, the fox story survives and is at least as old as the horoscopes many people read today. The story depicted in the statuary symbolizes the basic opposition between the sun and the moon, male and female, day and night, good and evil.”

Benfer said there is still excavation to do at the site and that future discoveries may give more insight into the mythology. 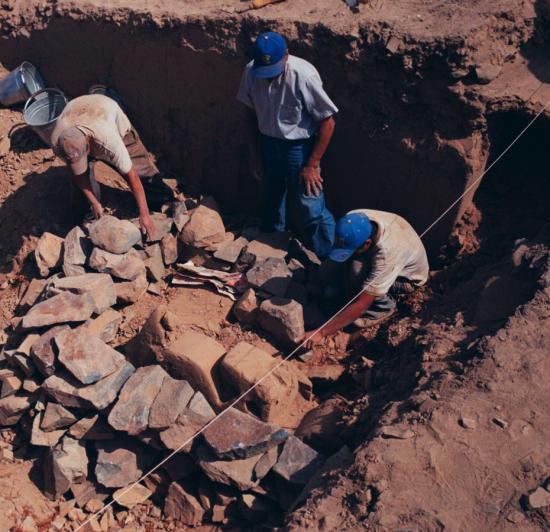 The first fox sculpture is being excavated by Peruvian team members.

The paper “Ancient South American Cosmology: Four Thousand Years of the Myth of the Fox,” was co-authored with Louanna Furbee, a MU professor emeritus of Linguistic Anthropology, and Hugo Ludeña, of the National University of Federico Villarreal  of Perú. It is being published in the upcoming edition of the Journal of Cosmology.