Was it the evolution of the hand, or of the brain, that enabled prehistoric toolmakers to make the leap from simple flakes of rock to a sophisticated hand axe?

A new study finds that the ability to plan complex tasks was key. The research, published today in the Public Library of Science journal PLoS ONE, is the first to use a cyber data glove to precisely measure the hand movements of stone tool making, and compare the results to brain activation.

“Making a hand axe appears to require higher-order cognition in a part of the brain commonly known as Broca’s area,” said Emory anthropologist Dietrich Stout, co-author of the study. It’s an area associated with hierarchical planning and language processing, he noted, further suggesting links between tool-making and language evolution.

“The leap from stone flakes to intentionally shaped hand axes has been seen as a watershed in human prehistory, providing our first evidence for the imposition of preconceived, human designs on the natural world,” he said. 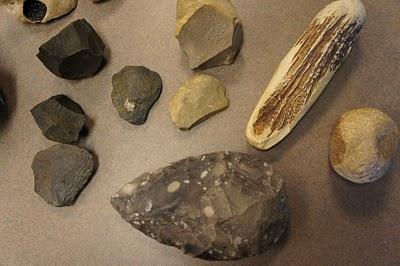 "For the past two million years, stone tool making has been the most common and consistent human technology," Stout says. Photo by Carol Clark.

Stout is an experimental archeologist who recreates prehistoric tool making to study the evolution of the human brain and mind. Subjects actually knap tools from stone as activity in their brains is recorded. (Watch the video, above, to see how Stone Age tools were made.)

“Changes in the hand and grip were probably what made it possible to make the first stone tools,” Stout said. “Increasingly we’re finding that the earliest tools required visual and motor skills, but were conceptually simple.”

For this study, Stout used a data glove to record the exact hand postures of the research subject across a range of prehistoric technologies. He teamed with Aldo Faisal, a neuroscientist at Imperial College London, and archeologists Jan Apel of Gotland University College in Sweden and Bruce Bradley of Exeter University in Devon, England.

“I assumed that the manual dexterity was going to be greater for making the hand axe,” Stout said. “But we found that the hand gestures were so similar that we couldn’t distinguish them.” 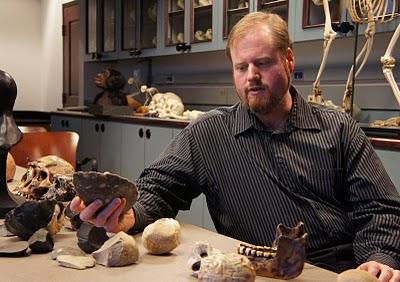 The leap from stone flakes to a hand axe was "a watershed in human prehistory," Stout says. Photo by Carol Clark.

A previous study by Stout found differences in the brain activation associated with Oldowan versus Acheulean technologies. It was unclear, however, whether the difference was due to higher-level behavior organization or lower-level differences in manipulative complexity.

The results of the data glove study point to higher cognition. “The advances of Late Acheulean technology were not about increased dexterity. They were about the ability to plan complex action sequences,” Stout said.

A hand axe requires the maker to begin with a precise, symmetrical end in mind. A variety of tools are involved, from a large rock to rough out the basic shape of the axe, to a softer implement, such as an antler billet, to thin and sharpen the edges.

The ongoing research could lead to new understanding of the modern human brain. “For the past two million years, stone tool-making has been the most common and consistent human technology, done by virtually every society,” Stout said. "It’s an important human behavior that probably helped shape our brains.”