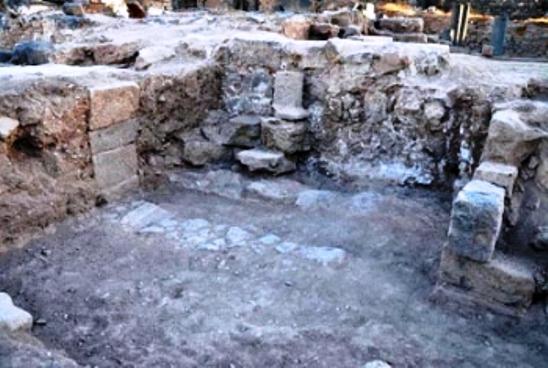 The Roman bathhouses in the archaeological city of Bosra, which were built in a strategic location at the center of the ancient city, played a very important role in the social life of the inhabitants during the Roman reign as they were centers for making commercial transactions and exchanging information, in addition to their role in entertainment.

Director of Bosra Antiquities Department Wafaa al-Audi said expanding the first part of the bathhouses in the 3rd century AD indicates the increase in the number of citizens at that time, adding that the chambers contained suitable basins while the walls were covered with marble slabs and decorated with wall paintings.

She indicated that the floor was also furnished with marble boards or mosaic paintings while a number of squares were built and decorated with vestibules encompassing several pillars.

The archaeological findings at the site, particularly the clay pieces and tools prove that the bathhouses witnessed a stage of restoration and precise organization in the 4th and 5th centuries AD while an external square was built in the 6th century.

In the 12th and 13th centuries AD, a number of commercial shops were built over the streets surrounding the bathhouses, in addition to establishing a network of roads passing through the ancient buildings and fixing water pipes made of baked clay.

The bathhouses included four halls built of basalt stone as they were carved with great preciseness and huge sizes in the shape of regular bonds with the same height.

The walls of the bathhouses contained pipes of hot water and air on which there were windows closed with double wooden shutters form the outside while they were closed with colorful glass from the inside.

Glass-made open basins were put inside the gypsum between brick-made bases while the domes were built on the walls.

Head of the national expedition working at the bathhouses Basim Hassan said the expedition unearthed two clay lanterns at the site, in addition to a number of clay pieces of different sizes and shapes dating back to the Byzantine Era.

He indicated that the expedition cleaned the chamber built next to the western stair, adding that it worked on emptying the chamber of the rubbles to find a room with dimensions of 360cm x 480cm, and at its center an arch was built of carved stones.

At the internal part of the 210cm-height room there is a wall with holes at its lower part which indicate that it was built in a later period.

At the entrance of the room, a stone-made small door was unearthed, in addition to 3 clay lanterns dating back to the Byzantine and Ayyubid reigns.

The expedition also unearthed a basalt-made pillar with a 155cm-height and 80cm-diameter at the external passageway. On top of the pillar, the name of a Roman leader was carved. A Nabataean crown was also unearthed at the site, three heads of which are lost.

At the external part in the northern side of the bathhouses, a spillway for the salty water of the Roman bathhouses was unearthed, at the end of which a huge amount of Byzantine clay pieces were found. The wall constitutes a roof for the spillway with a length of 8, 5 meters.

There were three public bathhouses in Bosra City which provided massage service for the people. According to the archaeological findings, the bathhouses date back to the Bronze Age and later, the Iron Age. They were built in line with the Nabataean architectural style, and used as bathhouses in the middle of the 2nd century AD.