The footprints have been found in an area of exposed peat, along with holes which could have supported a causeway across ancient salt marshes

Human and animal fossilised footprints that may be from the Bronze Age have been exposed on a Ceredigion beach.

Archaeologists are racing against changing tides to record and excavate the find in peat at Borth, which gives a snapshot of a time when the shore lay further west.

Staff and students from the University of Wales Trinity St David are carrying out the work.

As well as the footprints, a line of post holes has been found, which could have been a causeway.

They lie across an area that would have been salt marsh when the footprints were made.

The Royal Commission on Ancient and Historic Monuments is providing survey support, mapping the extent of the peat and other exposed features.

Submerged forests have been found further north on the beach and nearby in the past.

Dr Martin Bates is one of the archaeologists leading the excavation team, and it was his father, retired geologist Denis Bates, who discovered the footprints last month.

Dr Bates told BBC Wales' news website: "My father has had an interest in submerged forests for many years.

"He was down in February as this part of the beach was very clear.

"For various reasons the patterns of sand movement have been temporarily altered and it means this area of beach has been stripped of sand.

"He noticed the marks and told me they didn't look natural." 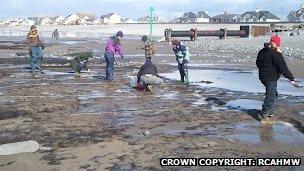 He estimates they have a window of a few months to log the discoveries and take samples away for environmental testing before the sands shift again and cover the footprints up.

"In the context of Ceredigion and west Wales, it's the first time we have found this type of evidence.

"The submerged forests [nearby] are probably the most significant in the UK.

"What we have never had before is documented evidence of human habitation."

Dr Bates added that there were a range of footprints discovered, including cattle, sheep or goat and possibly a bear.

However the one which resonates with him is a print which belonged to a young child.

"We have got a footprint of a four-year-old's foot where we can see the toes and everything.

"I can stand where this child was standing about 4,000 years ago and even though we would have been seeing different things, the intimacy of that is quite special."

Work in previous years on submerged forests found on the area to the north has established that a forest was growing in the area between 3000 and 2500 BC.

The area was gradually waterlogged with peat growth. A number of finds in the area included a Mesolithic composite tool of antler, two flints, an auroch (extinct ox) skeleton and a piece of antler.