Huge fortresses of this kind pose an enigma in Viking history.

The Borgring fortress was discovered using airborne laser technology. It was built during the reign of the Viking king Harald Bluetooth in the 10th century - Goodchild et al / Antiquity 2017

A rare archaeological discovery has brought to light a historic 10th century Viking fortress to the south of Copenhagen.

The Borgring fortress is an incredibly accurate circular shape, measuring about 150 metres in diameter. It is the first of its kind to be found in Denmark for 60 years. The findings are published in a study in the journal Antiquity.

The structure is one of the Trelleborg-type fortresses that have a distinctive overall shape and internal structure. The earthworks, houses and other structures are meticulously arranged within the fortress. They have V-shaped ditches that are precisely circular, with four gates at the four points of the compass.

The Borgring fortress had been tentatively identified in the 1970s, but the technology was lacking then to verify whether it really was a Trelleborg-type fortress, study author Søren Michael Sindbæk of Aarhus University, told IBTimes UK.

"That is the most beautiful aspect of our results – the suspicion that this could have been a fortress was raised by a very beautiful map made in 1970 that was the best survey method you had in those days. But it was impossible to prove it in those days."

With more sensitive modern technologies such as LiDAR – airborne laser scanning – Sindbæk and his colleagues were able to measure subtle differences at ground-level suggesting the presence of the ring.

Before its destruction, the Borgring fortress was made of wood and earth-and-turf ramparts. The fortress had two streets with an intersection in the middle to form a cross shape. The streets would have been paved with timber, connecting four large wooden buildings within the fortress.

There have only been about five confirmed Trelleborg fortresses discovered in Denmark to date. They were all built in a curiously short period between 975 and 980 CE, during the reign of King Harald Bluetooth. They are massive, circular structures typically between 140 to 250 metres in diameter.

"They posed a real enigma about the Viking Age when they were first discovered," Sindbæk said. "The Vikings were perceived to be a society of local petty kings competing over power."

This kind of organised control was usually associated with much later medieval kingship. The fortresses represented a surprising degree of organisation and centralisation that was not easily found in other surviving aspects of Viking culture. So how did such large and expensive structures suddenly appear in the Danish landscape around the year 975?

"They are related to a period of exceptional expression of kingship," Sindbæk explained. "The question is whether that means we need a complete reassessment of Viking society, or whether we should just be revisiting evidence from this particular period."

Due to the very short period that the structures were built – just five years – the latter is the most likely, Sindbæk said. The fortresses were most probably built during a period when the Vikings faced strong external enemies in the German and Slavic lands.

"If we look at the 970s and 980s it's exactly a time where every authority bordering on this empire is in a high state of emergency. There is a military power which is unprecedented and isn't repeated again for several generations," Sindbæk said.

The need to build Trelleborg fortresses fell away after the German emperor died in the 980s, so no more of the costly structures were built.

"The fact that they are these strange features that only occur under tension is fascinating.

"We have barely any other similar fortresses in Norway or Sweden, and in Denamrk there are no other very large fortresses of any kind. So they are very special. Because of the dates it seems that they coincide with a very unique military situation." 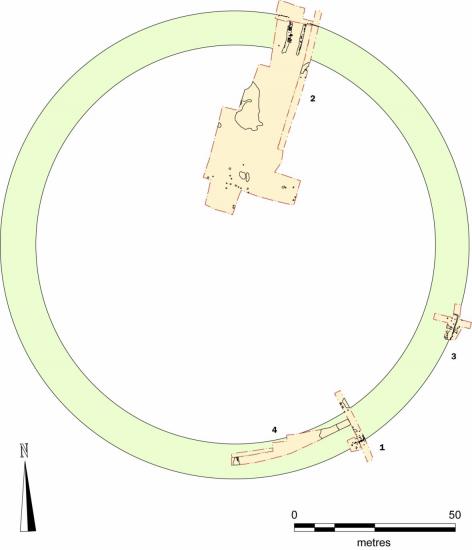