Farinelli suffered from a thickening of the cranium that is found almost exclusively in post-menopausal women. 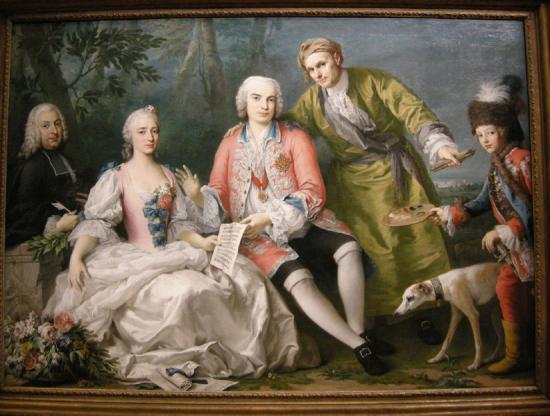 Farinelli (center, in red), as portrayed in this 1750 oil painting by Jacopo Amigoni. The painting is housed in the National Gallery of Victoria in Melbourne, Australia - Sailko

The legendary castrato singer Farinelli (1705–1782) suffered from a disease typical of post-menopausal women, according to the first-ever osteological analysis of a eunuch.

The poorly preserved remains of the 18th-century singer were exhumed in Italy in 2006. While Farinelli's music fans hoped to find the secret of a legendary voice, the scientists' goal was to reconstruct the singer's biological profile and the changes brought about by his castration before puberty.

Depriving Farinelli of his testes and their testosterone secretions not only resulted in the absence of male-type growth of the larynx, but also caused hormone-related pathologies.

"The fact that this disease was found in Farinelli's bones shows some important effects of castration," said Maria Giovanna Belcastro at the Laboratory of Bioarchaeology and Forensic Osteology of Bologna University.

The research project was supported by a group of music enthusiasts at the Centro Studi Farinelli and by a team of scientists led by Belcastro and Gino Fornaciari, professor of forensic anthropology at the University of Pisa.

The practice of castrating promising young singers began in the 16th century and was outlawed in Italy only in 1870. It was linked, in part, to Catholicism's ban on females singing in church.

Like many other boys destined to a singing career, Farinelli, whose real name was Carlo Broschi, was castrated before puberty to preserve his boyish treble voice into adult life.

Indeed, Farinelli became the most popular singer of his day. His voice could span over three octaves and he could hold a note for a whole minute without taking breath.

At the age of 32, when he was at the height of his career, Farinelli was invited to Spain by Queen Elisabetta Farnese, who believed that the castrato's powerful and sweet voice would cure the depression of her husband Philip V.

The music therapy lasted for 23 years. While in Spain, Farinelli sang the same four songs every night to Philip, established an Italian opera company, but never again performed publicly.

In 1760, at the age of 55, having amassed a vast fortune, the singer retired to Bologna, where he lived until his death at 78.

Analysis of his bone remains showed other effects likely related to castration at an early age.

"The epiphyseal line [what remains after growth ceases and the growth plate of children and adolescents disappears] was still visible on the medial border of the left scapula (the bone connecting the upper arm bone with the clavicle) and on the left iliac crest (the most prominent bone on the pelvis). Both sites are normally completely fused at 23 years," Belcastro and colleagues wrote in the Journal of Anatomy.

They added that epiphyseal lines almost never persist past about 35 years old.

Such delayed epiphyseal fusion produced long limb bones and a subsequent tall stature. Based on the length of the right ulna, the researchers estimated that Farinelli was about six feet, three inches tall.

He also had a decent teeth. According to the researchers, 25 teeth were preserved and only two were decayed.

"The health and aesthetic of the dentition is likely to have been important in the career of a singer," they wrote.

Most importantly, the researchers found that Farinelli's cranial fragments revealed an extreme thickening of the forehead, up to 21 millimeters, pointing to a severe case of hyperostosis frontalis interna (HFI).

Due to its slow progression, the disease, which is found almost exclusively in post-menopausal women and men with sex hormonal imbalances, rarely poses a risk for the individual. However, in severe cases, it can be associated with headaches, epilepsy and dementia.

It wasn't Farinelli's case. Historic accounts record that three weeks before his death he sang almost the whole day long, that he preserved a good memory and was lucid until the day before his death.

"These elements indicate that he did not suffer from any of the behavioral disturbances and psychiatric disorders that have been associated with HFI," the researchers concluded.

According to Kristina Killgrove, a biological anthropologist at the University of North Carolina, the research is important because hyperostosis frontalis interna is not well understood in both contemporary and historical medicine.

"These findings may therefore be important for bioarchaeologists who want to investigate the life histories of eunuchs, such as those who lived in Pharaonic Egypt or during the later Roman Empire," Killgrove told Discovery News.