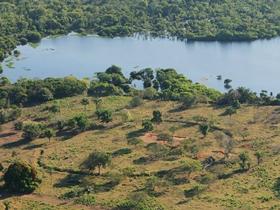 A team of researchers with members from the U.K., Germany and Bolivia has found evidence that suggests that parts of Bolivia now covered with rainforest were drier and more savanna-like just 2000 to 3000 years ago, a time when people were already living in the area. In their paper published in Proceedings of the National Academy of Sciences, the researchers describe how they took sediment core samples from lakes and noted large ditches dug by people that lived in the area during a time before the rainforests—their findings suggest such people adapted to the wetter climate over time, rather than moved into it and started cutting down trees, as has been suggested by other research.

Cutting of trees in the area recently revealed ditches dug by people thousands of years ago—each about a kilometer long and three meters deep by four meters wide. No one knows yet why the ditches were dug, or what purpose they served. But in this new effort, the researchers took core samples from sediments that had formed over thousands of years in nearby lakes. In examining the samples, the researchers were surprised to find grass pollen of the type typically found in the savanna, such as in Africa. The core samples also showed that people in the area were planting maize during the same time period.

The discovery of the ditches and pollen in the core samples suggests that people were living in the area and farming, prior to the changeover to rain forest. As the rainforest took hold, due to an increasingly wetter climate (possibly due, the researchers suggest to a slight change in Earth's orbit), the people living in the area likely adapted by preventing trees from growing in farm areas or cutting new areas to increase yields. These findings suggest that early people living in what is now northeastern Boliva, were neither hunter-gathers nor tree cutting settlers hacking out a living. Instead, it appears that they were simply farmers both before and during the onset of the rainforest.

The researchers also noted that the core samples showed that rain forest plants became dominant in one area as recently as 500 years ago, possibly due to the disappearance of the people that lived there dying from diseases brought by European settlers.

Abstract
There is considerable controversy over whether pre-Columbian (pre-A.D. 1492) Amazonia was largely "pristine" and sparsely populated by slash-and-burn agriculturists, or instead a densely populated, domesticated landscape, heavily altered by extensive deforestation and anthropogenic burning. The discovery of hundreds of large geometric earthworks beneath intact rainforest across southern Amazonia challenges its status as a pristine landscape, and has been assumed to indicate extensive pre-Columbian deforestation by large populations. We tested these assumptions using coupled local- and regional-scale paleoecological records to reconstruct land use on an earthwork site in northeast Bolivia within the context of regional, climate-driven biome changes. This approach revealed evidence for an alternative scenario of Amazonian land use, which did not necessitate labor-intensive rainforest clearance for earthwork construction. Instead, we show that the inhabitants exploited a naturally open savanna landscape that they maintained around their settlement despite the climatically driven rainforest expansion that began ∼2,000 y ago across the region. Earthwork construction and agriculture on terra firme landscapes currently occupied by the seasonal rainforests of southern Amazonia may therefore not have necessitated large-scale deforestation using stone tools. This finding implies far less labor—and potentially lower population density—than previously supposed. Our findings demonstrate that current debates over the magnitude and nature of pre-Columbian Amazonian land use, and its impact on global biogeochemical cycling, are potentially flawed because they do not consider this land use in the context of climate-driven forest–savanna biome shifts through the mid-to-late Holocene.