Archaeologists from TVAS have unearthed the grave of a warrior who died at around the time of Caesar's Gallic Wars, in the 50s BC. 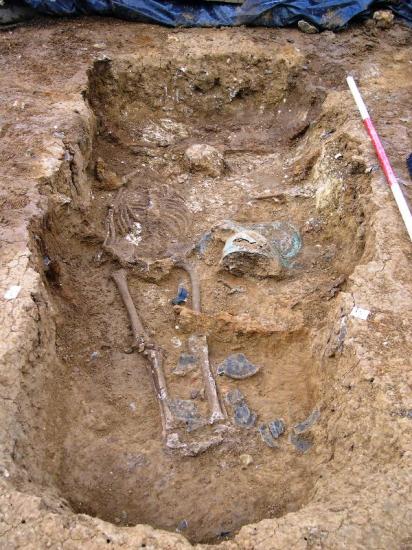 The team, led by Andy Taylor, has been excavating in advance of a new housing development on behalf of Berkeley Homes (Southern) Limited and Persimmon Homes (South Coast) Limited.

These excavations have revealed Bronze age boundary ditches and occupation, a small hoard of four Middle Bronze Age bronze axes (palstaves), an Iron Age roundhouse and a Roman building, set amongst fields. But the chief interest lies in the finding of a rich, isolated burial, which is not part of a larger cemetery and is not otherwise distinguished from the rest of the site. The deceased, a mature male more than 30 years old, was laid out in a grave and was accompanied by grave goods. These included three large, complete, pottery jars placed at the end of the grave, presumably containing offerings to the gods or food for the journey into the afterlife, an iron knife and several items made of bronze. One appears to be a cavalry helmet and the other a shield boss. 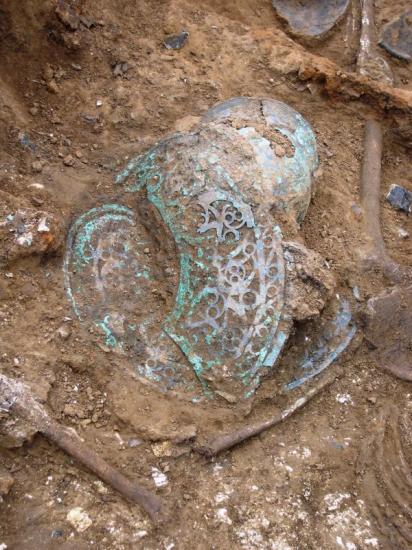 Close-up of the bronze shield boss and latticework.

Also present are two bronze latticework sheets highly decorated, perhaps used to cover the shield; they seem to big to be elaborate cheek-pieces for the helmet, but that is another possibility. The burial and its grave goods seem to have been placed in a large coffin or casket bound by iron hoops with a further iron framed structure placed on top. 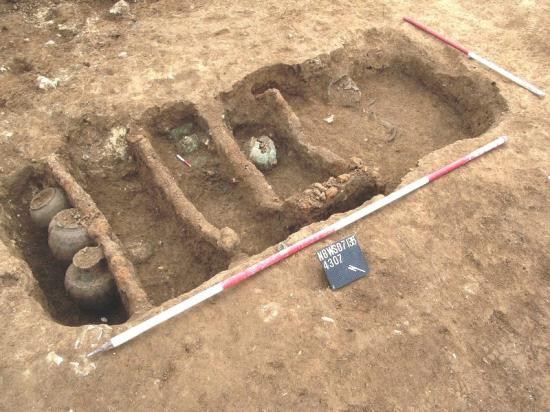 A general view of the grave early on in its excavation. This photo clearly shows the iron framework and the three complete pots.

The bronze objects are not well preserved and have been lifted in blocks of soil by a specialist for careful excavation and conservation in the laboratory prior to their study in detail. The provisional date of the burial from the associated pottery, which seems to have been made specially for the funeral, and may have its origins in Normandy, indicates that it took place at the very beginning of what archaeologists term the Late Iron Age, perhaps around 50BC.

The burial does not appear to be so rich as some from the 1st century BC to 1st century AD in south-east England, but shares similarities with famous graves of Late Iron Age date from Welwyn and St Albans (Herts); Colchester (Essex); and Aylesford (Kent), and less close similarities with others from the continent. All of these are likely to have been graves of princes or chiefs (or, possibly, priests) but all are dated later than this site appears to be. It is also unclear if our warrior was himself from Gaul, or simply had acquired pottery from Normandy on his campaigns.

The Iron Age people of this area were in essence pro-Roman, and the Emperor Claudius, a century later, launched an invasion, initially, to restore the local king Verica to his throne. Our deceased does not seem rich enough to have been a king, but his weaponry, and likely date of death, suggest he may have been one of the mercenaries Caesar claims were accustomed to fight for the Gauls against him, which he used as one of his pretexts for his abortive invasions of England. Cross-channel links of this rather shadowy kind have long been known, but this grave is one of the most exciting pieces of evidence yet found confirming the personal nature of these connections.