Archaeologists have made a world-class Bronze Age find on a small field in North Denmark.

Constanze Rassmann, the curator of Museum Midtjylland, shows off the largest of the bronze axes. (Photo: Private photo)

Five huge Bronze Age axes have turned up in a field in Boest near Nørre Snede in Jutland, the museum writes in a press release.

And when they say huge, they mean huge. The axes are around twice the size of those usually found, explains Rassmann, who doesn't hesitate to compare the find to winning Champions League.

"Five such Bronze Age axes have been found in all Northern Europe to date, and then we go and five more in one go. That's fantastic," says the enthusiastic museum curator according to tv2.dk.

The axes date from 1600 BCE, which makes them one of the earliest Bronze Age finds in Denmark.

The gallery above contains pictures of the impressive find which has drawn archaeologists from far and wide to the field in Jutland.

The five bronze axes are each up to 30 cm (12") in size and contain as much as a kilo of pure metal. They help to emphasise how incredibly rich a place Boest was in the Bronze Age – something also indicated by earlier finds.

The archaeologists are wondering whether the axes were buried for ritual purposes.

"The axes are incredibly beautiful. They were painstakingly laid out next to and on top of each other and it's likely they were buried as a sacrifice to the gods," Rassmann told the newspaper Vejle Amts Folkeblad. 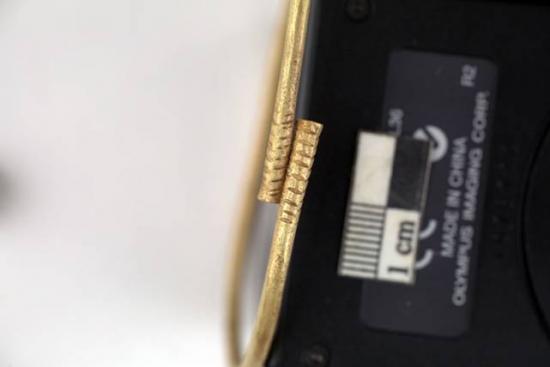 In late April, the archaeologists also found two gold amulets and a gold ring at the excavation site. This is a close-up of the declaration on one of the amulets, each of which weighs 21 grams. (Photo: Johannes Kalmbach / Römisch-Germanische Kommission)

The ritual intentions are underscored by yet another sensational find made at the excavation site. Besides the axes, the archaeologists also found traces of four rows of posts, the height of a man, stretching at least 100 metres across the landscape. 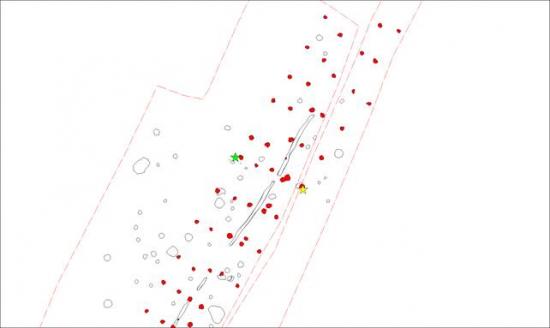 Overview of the site of the find near Nørre Snede. The green star indicates where the axes were found, and the archaeologists found gold artefacts at the yellow star. The red dots symbolise posts which marked out an ancient processional route. (Illustration: Museum Midtjylland)

"We imagine that this was [associated with] a ritual of some kind. Whether it was a death ritual or a plea for good weather, we have no idea. So far we've followed the traces of the posts for 100 metres until they "disappear" into woodland. But we hope to get the opportunity to dig it all up at some stage," says Rassmann according to tv2.dk

Museum mid-Jutland actually has a local Christmas tree grower to thank the extraordinary find which is now ended up in their conservation lab.

The owner of the field, Esben Arildskov, had asked his brother-in-law to survey the area with a metal detector before he started planting Christmas trees. He wanted to make sure that he didn't destroy anything historic; a decision that turned out to be very wise.

His brother-in-law, Bent Rasmussen, found two axes and when the professional archaeologists came to the site they found another three within a very small area.

"From that period, around 1600 BCE, we only know of five other axes that were spread across northern Germany, Denmark and Sweden. But finding five axes in one place is completely unheard of and ground-breaking in the world of archaeology," Rassmann told the local newspaper in Skanderborg.

The axes are undergoing conservation at Museum Midtjylland, after which they will be taken to the National Museum of Denmark in Copenhagen.