For more than 40 years, archaeologists have been coaxing what they could from the traces of an ancient Puebloan settlement in New Mexico they call Blue J.

Buried under a thousand years’ worth of eroded stone and wind-blown sand, Blue J has intrigued experts with what little it has revealed: the outlines of nearly 60 households, situated around a series of open plazas, the masonry and building styles dating their construction to the 11th century.

Almost entirely unexcavated, the settlement sits just 70 kilometers south of Chaco Canyon — the nexus of Ancestral Pueblo culture — and was built during the heyday of Chaco’s widest influence.

And yet Blue J has been notable so far for what it appeared to lack: the monumental, ceremonial architecture that would signal its role as a Chacoan community.

No trace has been found of a multistory great house, for instance, which in other settlements was key to both ritual and trade; nor had experts detected any circular, subterranean kivas, where elites would have met for worship and decision-making. 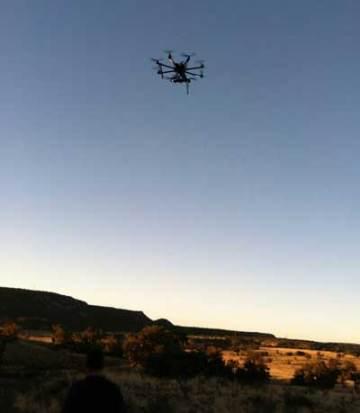 “Because of the lack of visible Chacoan ceremonial architecture, such as a monumental great house or great kiva,  I’ve actually argued that the people of Blue J may have resisted Chaco Canyon religious dominance by pointedly not building any Chaco-style architecture,” said Dr. John Kantner, an archaeologist with the University of North Florida.

But now Blue J appears to be giving up some of its secrets, and changing the perspective of Kantner and others, as new technology allows archaeologists to see under the desert floor.

Using a small, remote-controlled copter equipped with a heat-sensing camera, Kantner and his colleagues were able to discover ruins last June that for decades had been obscured by soil and sagebrush.

The features revealed by the copter — or drone, as they call it — may reshape archaeologists’ understanding of the size, scope, and cultural affiliations of the Blue J community.

“The drone work was able to show us that at least some of the sites are much larger below the surface than can be seen on the surface,” Kantner said in an interview.

“Since I had gone to the expense of excavating a couple of the households … I knew that there was  hidden architecture, but I didn’t have any quick and inexpensive way to determine that without digging a whole lot of holes.

“At the very least, the drone work suggests the village was much larger than I had originally calculated based on surface remains.”

The camera mounted on the drone used infrared sensing to detect the ambient desert heat retained by the underground masonry, explained Dr. Jesse Casana of the University of Arkansas, co-author of the new Blue J research published in the Journal of Archaeological Science.

“Because the stonework of the archaeological ruins retains heat longer than surrounding soils, we can use the technology to reveal ‘hot’ areas where stone rubble was buried as well as ‘cool’ areas showing cavities below the surface,” Casana said in a statement.

Over the course of five aerial surveys, each about 11 minutes long, the drone used this technology to detect the footprints of a large blocks of rooms facing an open courtyard, as well as sections of enclosing walls, and — most notably — two large, deep, circular features, one of which fits the dimensions of a ceremonial kiva. 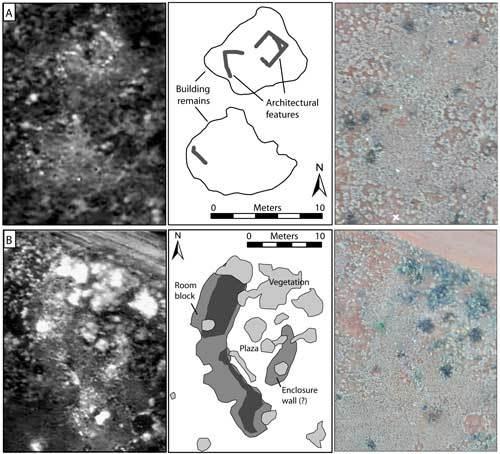 Scans from aerial surveys show thermal images on the left with photographic images of the surface on the right.
As detailed by the illustrations at center, the thermal images reveal traces of ruins that aren’t visible on the surface. (Photos courtesy Kantner and Casana)

“The drone identified at least one circular, buried anomaly that is almost exactly the right size for a great kiva,” Kantner said. ”It is decidedly not visible in any way on the surface.”

This feature may have the biggest implications of any other discovery made by the drone, he said, since the presence of a distinctly Chacoan religious structure would suggest that Blue J was, in fact, within Chaco Canyon’s cultural sphere of influence.

“If it is indeed a great kiva, I’ll have to change my interpretation of how villages like Blue J interacted with Chaco Canyon,” he said.

While Kantner weighs the permissions and funding that would be necessary to finally excavate Blue J, Casana, who specializes in the archaeology of the Middle East, sees opportunities for using unmanned aerial vehicles, or UAVs, at sites around the world.

“This project has convinced us that UAV-based thermal imaging holds great potential for discovery and mapping of ancient sites,” Casana said.

“Traditional archaeological fieldwork is time-consuming and labor intensive, and surveying large areas can become expensive. We’ve known for decades that thermography might theoretically be a powerful alternative approach, but it’s only with these new technologies that it’s become feasible.”

“We will soon be trying this out in other parts of the world, with the goal of making aerial thermography a routinely used method for uncovering the human past.”