Recently published research describes how archaeologists outfitted a customized drone with a heat-sensing camera to unearth what they believe are ceremonial pits and other features at the site of an ancient village in New Mexico. 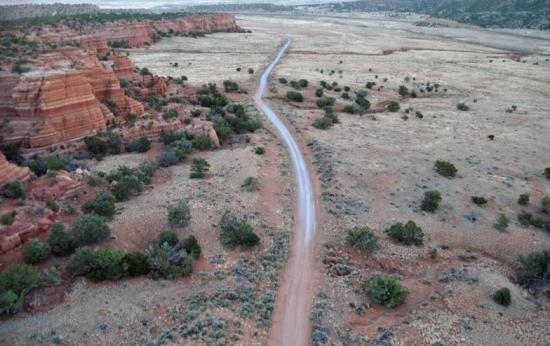 Photo provided by the University of North Florida Office of Research, shows an aerial photo taken from a drone of the Blue J area in northwestern New Mexico. Researchers outfitted a customized drone with a heat-sensing camera to unearth what they believe are ceremonial pits and other features at the site of an ancient village in New Mexico. Jesse Casana, AP

The discovery of the structures hidden beneath layers of sediment and sagebrush is being hailed as an important step that could help archaeologists shed light on mysteries long buried by eroding desert landscapes from the American Southwest to the Middle East. The results of the research were published earlier this month in the Journal of Archaeological Science.

Since the 1970s, archaeologists have known that aerial images of thermal infrared wavelengths of light could be a powerful tool for spotting cultural remains on the ground. But few have had access to million-dollar satellites, and helicopters and planes have their limits.

Now, technology is catching up with demand.

Archaeologists can get quality images from very specific altitudes and angles at any time of day and in a range of weather using inexpensive drones and commercially available cameras that have as much as five times the resolution of those available just a few years ago. A basic eight-rotor drone starts at about $3,700.

Jesse Casana, an archaeologist at the University of Arkansas, teamed up with University of North Florida professor John Kantner last summer to test the drones in a remote area of northwestern New Mexico, south of Chaco Canyon—once the cultural and religious center of ancient Puebloan society.

Kantner has been studying a village in the area known as Blue J. He found two households at the village's edge through test digs, but much of Blue J's secrets remain buried under eroded sandstone and wind-blown silt. 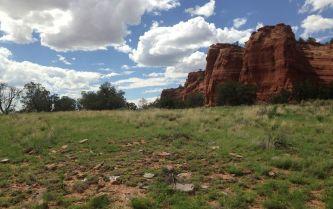 Photo provided by the University of North Florida Office of Research shows a surface shot taken by a drone of some of the remnants of stone at the Blue J village in northwestern New Mexico. Researchers outfitted a customized drone with a heat-sensing camera to unearth what they believe are ceremonial pits and other features at the site of an ancient village in New Mexico. John Kantner, AP

Blue J was most active close to 1,000 years ago, around the same time as Chaco. So finding structures such as kivas and great houses at the site would help solidify the theory that Chaco's influence spread far and wide. Kivas are circular, subterranean meeting places associated with ceremonial activities. Great houses were massive multistory stone buildings, some of which were oriented to solar and lunar directions and offered lines of sight between buildings to allow for communication.

Aside from dozens of anthills, the drone picked up on much larger, unnatural circular shapes that are thought to be kivas. From the surface, these structures are invisible, Kantner said. He said crews can use the drone information to plan a dig at the location to search for the archaeological remnants.

"Really within a few hours we were able to survey this area that took me a long time, years of what we call ground reconnaissance and excavation to see what's below the surface," he said. "So this is great for quickly and pretty cheaply being able to find sites."

There already is talk about using the drones in other dry environments such as Saudi Arabia and Cyprus, where the difference between daytime and nighttime temperatures would be great enough to allow the heat signatures of buried stone structures or other features to pop up on the thermal images.

Some researchers also have suggested using drone technology to search for a lost Spanish fort in Georgia and along the banks of Florida's St. Johns River, Kantner said.

Sarah Parcak, an archaeologist at the University of Alabama in Birmingham who was not involved in the New Mexico research, said she's excited about the potential for using the technology in her work in Egypt. She said drones outfitted with sensors can hone in on what's most important in archaeology—the landscape and features that are buried beneath the ground.

"We think we know a site, and we've been working there for a long time, and lo and behold, new technologies show us things we weren't even expecting," Parcak said. "The great thing about remote sensing is it really gives you a new set of eyes in the sky to see what is otherwise invisible."

The drones have their limits. For example, flights usually are less than 15 minutes depending on battery power and camera weight, and the eight-rotor mini copters have been known to stop and come crashing to the ground.

There also are questions about whether federal regulators will toughen rules governing drone flights.

Kantner said as drones become more reliable, their ability to survey vast areas quickly will become even more important. He pointed to potential threats of oil and gas development and coal and uranium mining throughout the Chaco region.

"There are resources that we obviously need for our nation's self-sufficiency, but on the other hand, we don't want to give away our cultural patrimony by losing these archaeology sites," he said.